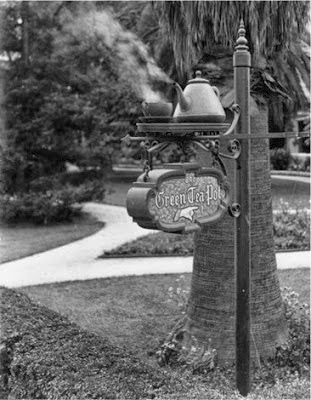 Karen wins with her 8:39 p.m. Tuesday guess "From the looks of that sago palm, I'm guessing it was a tea house at the Green Hotel?"
In Tuesday's post I cropped the photo, so here it is in full frame. 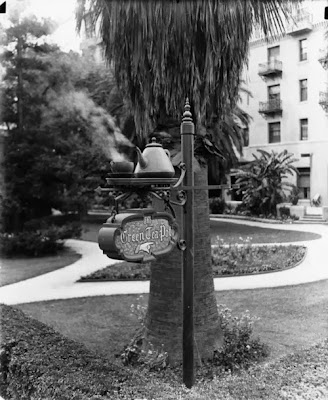 The Green Tea Pot was a restaurant in the 1920s inside the Hotel Green, now known as the Castle Green.

Unfortunately I couldn't find a photo of the café inside the hotel. But thanks to Pasadena Central Library, we do have some context by way of some articles in the Los Angeles Times.

Nearly $200,000 has been spent in remodeling the Hotel Green, famous Pasadena hostelry, and the Castle Green Apartments, adjoining that hotel, according to Charles B. Hervey, owner and manager of the Hotel Green. The hotel is now operated under the European plan the year around.

The Green Tea Pot Café is maintained in conjunction with the Green, offering excellent service. Mr. Hervey, who also is associated with F. W. Paget of San Diego in the management of the Maryland in that city, anticipates an unusually heavy business for the winter season.

The Green Tea Pot, unique café of the Hotel Green in Pasadena, has been enlarged to double its former capacity, now seating 250. Henceforth, it will be known as the Colonial Café of the Green. The chef and crew of the Colonial Café of the Green (all women), formerly of the Samarkand of Santa Barbara, are serving dainty home-cooked foods. Chafing dish luncheons and Saturday evening dinner-dances are featured. Mr. Alfred Koch, former steward of the Samarkand, is in charge.

The new and enlarged Colonial Café of the Hotel Green in Pasadena is attracting many large luncheon and dinner parties. It is fast becoming the center of the social life of that section of Pasadena, according to Manager J. Manning Murfee. Dainty menus prepared by a trained crew of women cooks are featured.