Preparing for Adventures in Radiation 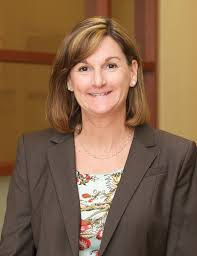 Two weeks ago I had a consultation with Dr. Ruth Williamson (above), the lead radiation oncologist and medical director at Huntington Hospital's Cancer Center.


"One of your nodes was positive for cancer
and it was a pretty significent deposit
and there was some extension of cancer cells
outside of that lymph node."

The entire first floor is made up of cancer testing and treatment facilities, all in a spa-like atmosphere. This is one of the radiation rooms: 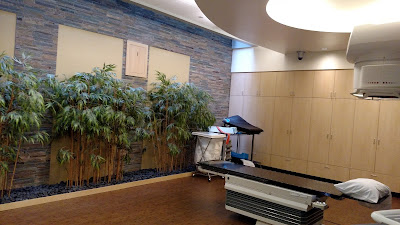 And this is one of the waiting areas, with a soothing water feature. 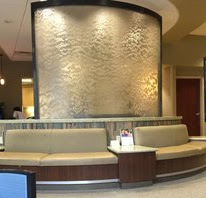 Another nice touch in a waiting area: 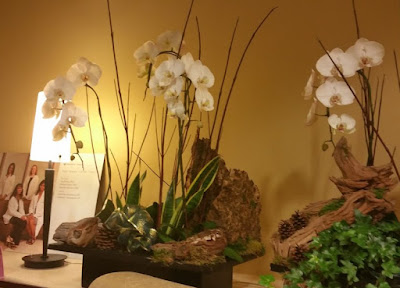 "The two most common side effects are fatigue
and radiation sunburn. If you have an area
that peels, that can potentially be harmful
and cause infection, so I want to hear from you about that right away if it happens
so we can modify what we’re doing."

I had been quite anxious about this meeting with Dr. Williamson for two reasons: radiation was a scary concept to me with that great-unknown factor; and I had been given the gift of all of December off from cancer treatments to give my body a post-chemotherapy break, so I equated this meeting with having to face the reality of my situation again and I wasn't exactly anticipating that with relish.

My friend Judy Kent came with me so I wouldn't have to go through it alone and so I would have a second set of ears in the meeting. As we sat in a waiting area after checking in, I wanted to run for the door in a panic, although I didn't articulate this to Judy.

Why couldn't all this just be over with? Why did I have to deal with any of this at all? Why couldn't I just hide under my bed in a fetal position in hopes the reality bogeyman would take a flying leap?

But here we were, and that was that.


"With the CT scan I want to see where your affected breast tissue is. I want to include
your lymph nodes. And then I’ll do a
plan for treatment with a physicist."

After giving me a full examination from head to toe, including a breast exam, Dr. Williamson explained why I need radiation, what to expect and much more. It was somewhat overwhelming, which is why I was pleasantly surprised that she audio-recorded the meeting and handed me the CD when we were finished.

The purple-colored quotes sprinkled throughout this post are from that meeting, spoken by Dr. Williamson.


"If we don't treat your breast, you have
a 30% risk of the tumor coming back
smack dab in the same place."

OK, she had my attention. Gulp.

I went back a week later for a CT scan and to get four little tattoos on my left breast so the radiation beam can be targeted to the same precise spots each time.


"If I do have to come in from the front
with an extra field, the possibility
of lymphedema is what will
keep me awake at night. We’ll just have to
monitor you very, very closely."

The radiation therapist, who will be with me throughout the treatment process, is a male. After he greeted me in the waiting area and escorted me to a CT scan room, he showed me where to change out of my blouse and bra and put on a gown.

He said he wanted me to know that if I preferred a female radiation therapist, he could arrange for that. He wanted to make sure I was completely comfortable.

No, I said. I trusted he had seen it all before.

Here's what the Philips Big Bore CT machine looks like: 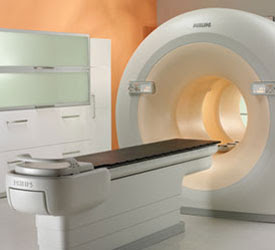 Before the 10-minute CT scan, while I was lying on the table with my left arm extended up and to the side, Dr. Williamson marked four spots with a Sharpie where she wanted tattoos applied, drew some lines here and there and took some photos.

My only frame of reference with tattoos had been watching a couple of episodes of reality shows about tattoo parlors. 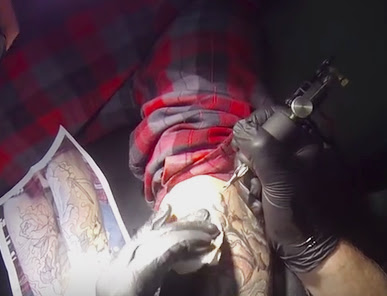 So I didn't really know what to expect. The tattoo technician didn't have one of those tattoo parlor drill machines after all. Instead, he had four thick needles, each filled with dye.

He never said one word. Not one. I couldn't see what he was doing, nor did I want to. As he felt around my skin a little bit, my radiation therapist suddenly blurted, "You're going to feel a stab!"

And a stab it was. A violent one. In four places. Four stabs. Thank goodness the radiation therapist said something as Tattoo Man was poised to strike, because Tattoo Man wasn't talking. Sadist.


"I do have some women who absolutely
do not want to get the tattoos. They want
the stickers, which can certainly be applied,
but the problem is that stickers
can fall off or shift a little bit."

Here's one of my little tattoos: 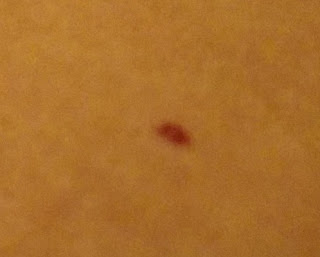 So now you're up to date. I'll go back one more time before radiation treatments begin, this time for a trial run on the machine without any beams beaming.


"The only permanent skin color change
will be the areola, the dark area
around the nipple. It might end up
somewhat lighter in color or even
a lot lighter than the other side."