This Anniversary Gets Me All Chalked Up 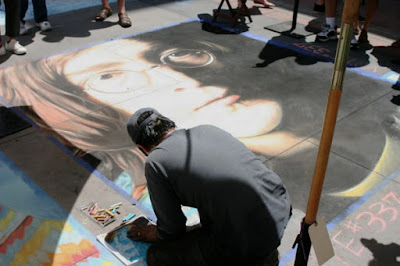 How can it be that the very first Pasadena Chalk Festival, produced by the Light Bringer Project, will soon have its 25th anniversary?

The anniversary is commemorated with an exhibition at the Pasadena Museum of History that will run through Aug. 13. More about that in a minute. 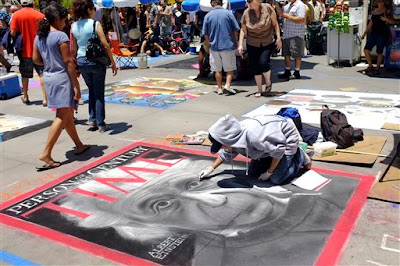 In the beginning, the two-day annual event was called Chalk It Up and was in Centennial Square in front of Pasadena City Hall.

The name changed over time:

Chalk It Up
Chalk on the Walk
Absolut Chalk
Pasadena Chalk Festival.

The Pasadena Chalk Festival even made it to the Guinness Book of World Records in 2010 when it broke the record -- with a Guinness official keeping track onsite -- for the world's "Largest Display of Chalk Pavement Art," a record that holds to this day.

Since 2004 it has been staged at Paseo Colorado, where it meanders along the upper and lower levels every Fathers Day weekend. There typically are 600 muralists who use more than 25,000 pieces of chalk and attract more than 100,000 visitors over the course of two days. 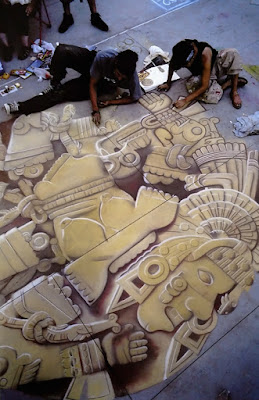 I went to a community reception Sunday, April 9, for the Pasadena Museum of History exhibition "Art in the Street: 25 Years of the Pasadena Chalk Festival."

It features photos of chalk art through the years, TV and print news coverage, a typical chalk muralist's space at the festival, all kinds of memorabilia and much more, including a couple of interactive opportunities.

Here are Light Bringer Project brass Tom Coston and Paddy Hurley (and yours truly) at the entrance to the exhibition. That's all chalk art you see in the entry archway (thanks to Laura Verlaque for the photo): 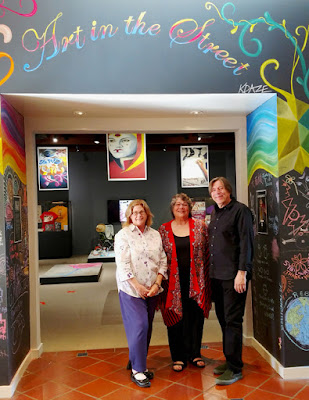 :
Kavita Sharma and Tom watching KTLA-TV coverage of the Pasadena Chalk Festival over the years. A full house of visitors: 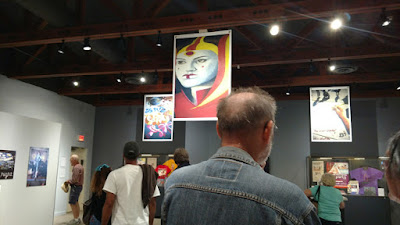 If you stand in the just the right spot and place your hands just so, ask someone to take your photo holding the rose that actually is on the floor and was created by a chalk artist especially for this exhibition. 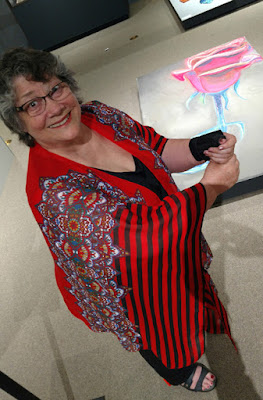 Photographer extraordinaire Brian Biery shot most (if not all) of the photos that grace the walls of the gallery. He can always be found at the Pasadena Chalk Festival, often standing on a ladder to get the perfect overhead shots of the giant chalk murals. Some of whimsical. some are likenesses of celebrities, some are copies of masterpieces. I'll just show you three: 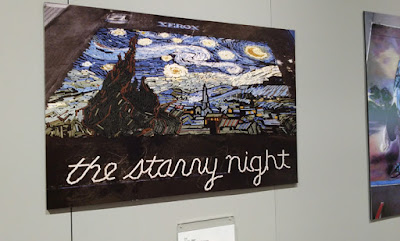 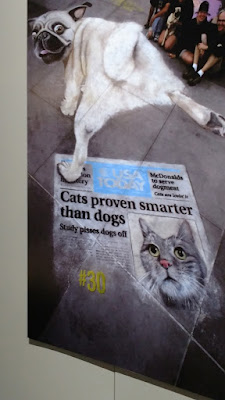 There are several display cases filled with memorabilia. Here is one: 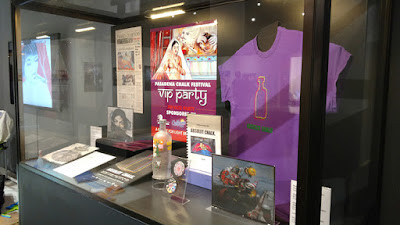 My granddaughter Kimberly, who lives in San Diego County, volunteered two years in a row at the chalk festival when it was Absolut Chalk in front of City Hall. Her name is included on a special list of thank-yous for people who went above and beyond over the years. (That's Tom's finger pointing at her name.) 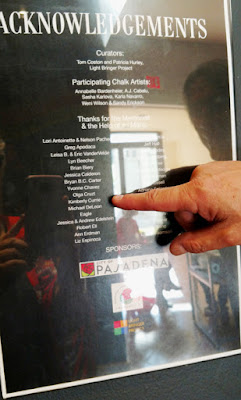 Come see the exhibition for yourself! What I've shown you here is just a very small sampling of what you'll find.