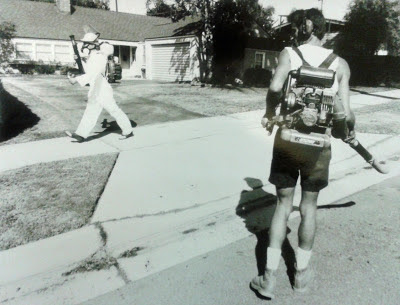 In the January 1990 photo above, a U.S. Department of Agriculture technician in protective gear passes a gardener on Coronet Avenue in Pasadena, one of many areas where malathion was sprayed to exterminate medflies. It was sprayed in neighborhoods where fruit trees are common.

Beginning in February 1990 our community became a test case for the rest of the nation in ongoing battles between the City of Pasadena, the State of California and the Federal Government after Gov. George Deukmejian ordered helicopters to fly low over Los Angeles County, including Pasadena, to spray the pesticide over houses, pools and gardens.

The State of California insisted that malathion posed no danger, and yet they warned everyone to stay indoors and cover their vehicles. That mixed message had people confused and upset. 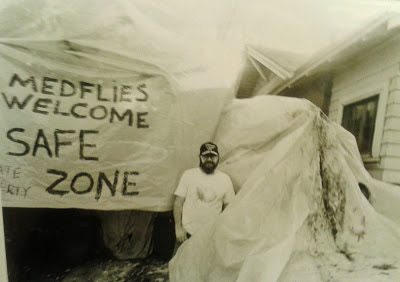 But most in the community did, including a coalition of environmental groups and grass-roots protesters.

''There's a growing unease about the safety of long-term exposure to malathion,'' City Councilman Rick Cole told the L.A. Times. "'There's also a sense that the state has displayed an arrogant disregard for the right of citizens to informed consent, The state is saying, 'We know what we're doing and it's none of your business.' And Pasadenans, like most Americans, don't like being pushed around.''

There was little -- and sometimes no -- warning before the aerial spraying, which often wreaked havoc.

For example, the outdoor ball for Ambassador College's final graduating class was ruined when, with no warning, a squadron of low-flying helicopters from the California Department of Agriculture buzzed the event, spraying the chemical all over the campus. All the food and refreshments had to be destroyed and the party was over.

The Pasadena Board of Directors (now called the City Council) adopted an ordinance banning aircraft from flying lower than 700 feet and informed the governor's office of the new law.

The Federal Aviation Administration (FAA) said it was the only agency with authority to regulate aviation.

"We'll see about that," said Mayor Bill Thomson. "We're in court over this matter and we'll find out who's right."

"The whole point of this ordinance is to stop them from flying in tight formations over our city. That's what's dangerous," Councilman Bill Paparian said. "We think we have all the authority we need."

The City Council was gunning for bear!

This colorful little guy was at the center of the controversy:


And then it happened.

Pasadena Police Lt. Terry Blumenthal, one of our helicopter pilots (now retired), got word at 1 a.m. that six state helicopters, flying in formation, were heading toward Pasadena with more than 1,000 gallons of malathion.

In an effort to enforce the new city ordinance, Terry got into a Pasadena PD helicopter and tried to intercept the state helicopters.

Here's a photo of Terry taking off that night: 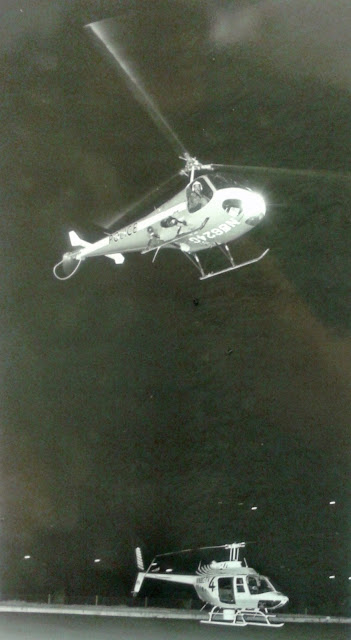 The transcription of part of the recorded conversation between Terry and one of the state helicopter pilots:

Terry: We have you flying in formation below 700 feet, in violation of Ordinance Number 9.42.010. I have to ask you to cease and desist.

Terry: Are you going to keep on spraying?

Terry, in a lone helicopter against a phalanx of six, flew back to the Pasadena PD heliport and issued a citation to the State of California for violating the ordinance.

Media worldwide picked up the story.


Here's a better photo of Terry in the pilot's seat preparing to take off for an observation mission, along with 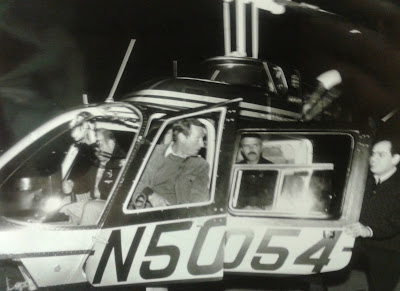 And this is the little guy that was at the center of all the controversy! 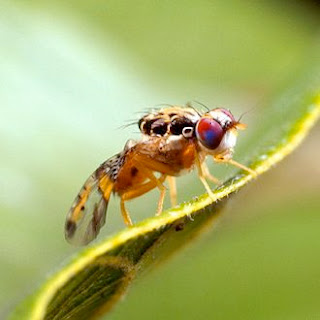 Many thanks to the Pasadena Museum of History and my own files.
Posted by Ann Erdman at 12:30 AM