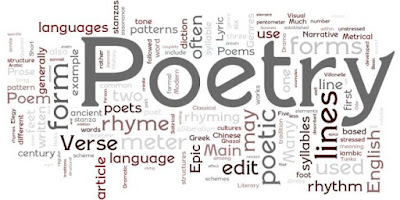 Now that I have been retired for just over four years (can you believe it?!), I have been venturing back to my love of creative writing after having spent nearly 40 years writing in the advertising and municipal government worlds.

Writing more creatively, as I did prolifically as a child, teenager and young adult, is not so easy to come back to in one smooth leap after all those years of writing print ads, video scripts, news releases, annual reports, speeches and so much more.

I've been writing to my heart's content lately, some prose, some poetry. I'm not ready to share anything yet.

I did take Petrea Burchard's four-week Story Kitchen workshop last month and found it to be a productive pathway to writing my novel that will be based on real events.

It occurred to me earlier today that there is only one week of National Poetry Month remaining and that I should do some kind of related blog post. 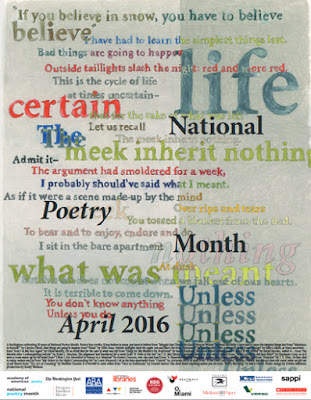 When I was in college more than four decades ago, we studied poems by W. H. Auden in Professor Gross's 20th century literature class.

Anyone who has been an English major knows the drill: Read and re-read a poem, silently and out loud (because a poem is meant to be heard) while paying attention to the punctuation that can help guide the voice of the reader and keeping an open mind to understand and perhaps interpret the intention of the poet and really appreciate the poem, if possible, on a gut level. There is a structure as well as a freedom to it all.

Then there was poetry writing. Another professor gave each of us an assignment to write 100 poems in one week. It sounds impossibly daunting, doesn't it? But it really wasn't. The entire point was to write. It was a grand experience.

This all may seem like a lethally dull drill to people who are not big literature and poetry aficionados, but it's not.

I was very fortunate to have had wonderful literature teachers in high school and college who inspired their students to love great works by making them relatable and enjoyable and fascinating, including poetry.

I feel badly for people who never had this kind of experience in school. For them, great literature may always seem like too much of a drudge to bother. They will never know what they're missing.

So there we were, learning some of the poems of W. H. Auden over the course of three weeks or so, from his beloved 1937 "As I Walked Out One Evening" with its narrator, singing lover and noisy city clocks to the brief, haunting "August 1968" written after the Soviet Union invaded Czechoslovakia. 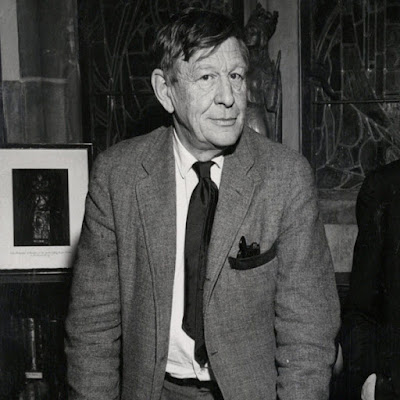 One of Auden's poems that really spoke to me during that time, and still today, is "Musée des Beaux Arts" written after he spent some time in Brussels, Belgium, during the late 1930s. One of his visits was to the Musées Royaux des Beaux-Arts de Belgique to see paintings by Dutch masters. 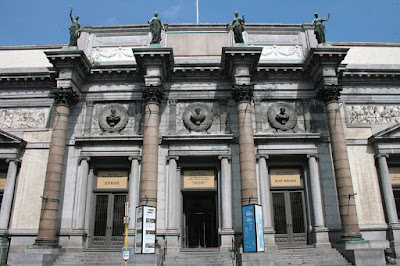 He was inspired by the 1558 Pieter Bruegel painting "Landscape with the Fall of Icarus." The painting is based on Ovid's "Metamorphoses Book VIII, Daedalus and Icarus."

On a large screen, Professor Gross showed us a slide of the painting and had us drink it all in quietly before he introduced the poem. At first glance the painting seemed simply to depict a lovely spring morning by the sea. I'll never forget the lights still being down in the room and my discovery of little details in the painting I had not noticed just moments before.

His reading of Auden's 1938 poem brought to life the farmer who is too busy focusing on his plowing to notice Icarus plummeting from the sky and landing in the sea while a fisherman leans over the edge of the water to look at fish below the surface, never seeing that just a few feet away the legs of Icarus are poking out of the water as he drowns. And also in the painting, though not mentioned in the poem, a shepherd looks up at the sky but in the wrong direction to see what has happened to poor Icarus. Some things never change: While one person is in distress, others go about their regular business, never observing a thing.

First, here is the painting.

Landscape with the Fall of Icarus
By Pieter Bruegel 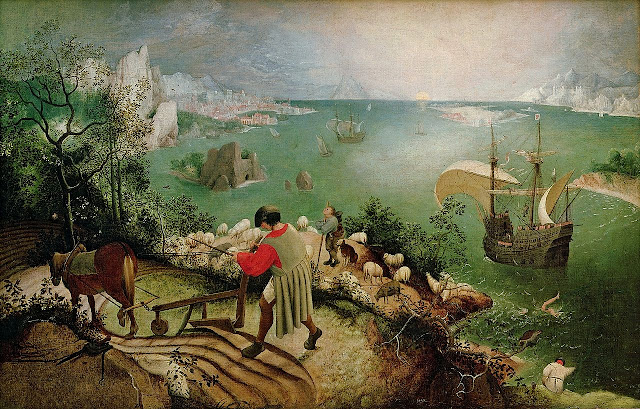 And now the poem.

About suffering they were never wrong,
The old Masters: how well they understood
Its human position: how it takes place
While someone else is eating or opening a window or just walking dully along;
How, when the aged are reverently, passionately waiting
For the miraculous birth, there always must be
Children who did not specially want it to happen, skating
On a pond at the edge of the wood:
They never forgot
That even the dreadful martyrdom must run its course
Anyhow in a corner, some untidy spot
Where the dogs go on with their doggy life and the torturer's horse
Scratches its innocent behind on a tree.

In Breughel's Icarus, for instance: how everything turns away
Quite leisurely from the disaster; the ploughman may
Have heard the splash, the forsaken cry,
But for him it was not an important failure; the sun shone
As it had to on the white legs disappearing into the green
Water, and the expensive delicate ship that must have seen
Something amazing, a boy falling out of the sky,
Had somewhere to get to and sailed calmly on.

One event remains, this one for adults. This is from the library's April newsletter:

"Be a poet! Create your own poem through an amazing interactive process led by a poet from Poetry Solves Problems, a literary & art community. Saturday, April 30 • 3 p.m. • Hill Avenue [Branch]"


Who are your favorite poets?