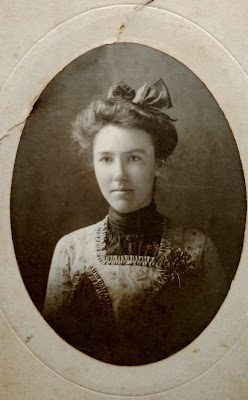 I have kept photos of Beulah Easley (1882-1931), my paternal grandaunt, in my phone gallery as inspiration ever since I was diagnosed with breast cancer in April 2015.

Breast cancer claimed Beulah's life in 1931 when she was 49 years old. In those days it was a death sentence for most women, with only a one in 20 rate of survival.

I have looked at those photos of Beulah so many times on my phone, taking some sense of comfort in silently and tearfully asking her to watch over me. (This is the first time I've ever revealed this to anyone.)

But breast cancer is not what motivated me to write this blog post. That inspiration came from my sister Charlou, who commented on this Facebook post of mine yesterday about Beulah being in the devastating 1906 San Francisco earthquake.

Charlou wrote, "She had an interesting life...An independent woman when that was unheard of."

She sure did and she sure was. 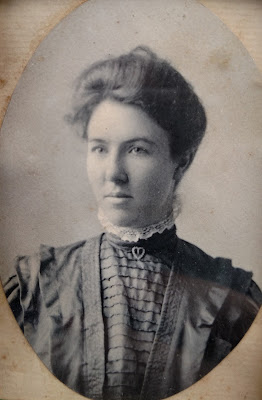 My siblings and I grew up with stories about Beulah and her siblings -- four brothers, including my beloved grandfather Jess Harper Easley (1891-1983). Fortunately, along with all the family stories on my father's and my mother's sides, there is a wealth of lovingly saved archival photos, documents, letters, telegrams, scrapbooks, family bibles and so much more memorabilia that are now in my possession for safe keeping and genealogy research.

This is a precious page in her mother May's (my paternal great-grandmother's) autograph book, signed by Beulah when she was a child. 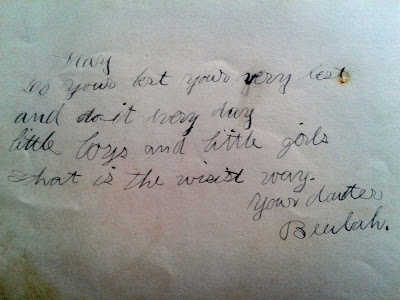 Being the only girl in the family didn't mean Beulah was all ribbons and lace. She held her own with her brothers, all of whom were younger than she was.

Let's just say she was the alpha chick.

Here she is, top right, in an Easley family portrait with her parents (my paternal great-grandparents) and her brothers in 1895.* 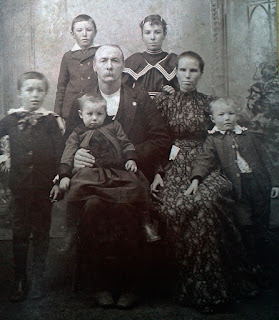 Jess Harper Easley, at the lower right, known by my siblings and me as Grandad, told me many times over the years that Beulah developed confidence and independence at a young age, was a leader at her schools in their hometown of Lebanon, Missouri, and had a healthy spirit of adventure.

She left Lebanon in 1902 at age 20 all by herself to have a grand adventure by train on her way to be a Harvey Girl in Albuquerque, New Mexico (but first she traveled to Kansas City, Missouri, for the job interview with the Harvey House personnel department).

She journeyed out west via the Atchison, Topeka and Santa Fe railway at the expense of the Fred Harvey Company, stopped and saw sights all along the way and finally arrived at the then-new Alvarado Hotel, part of the Harvey House family.

The Alvarado Hotel was next door to the Albuquerque train depot, which included the Harvey Indian Museum. 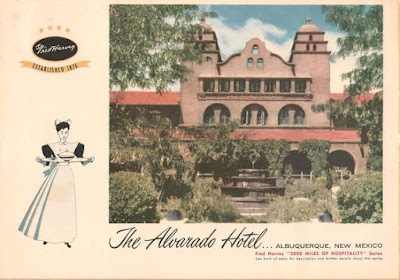 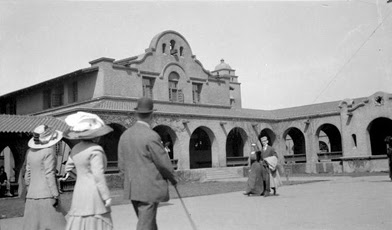 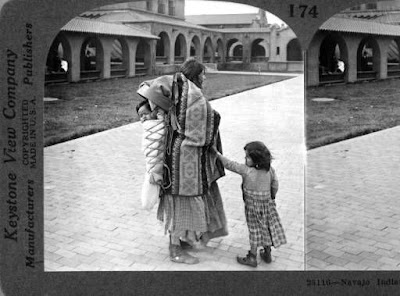 There are more exterior photos here.

And here are a couple of interiors: 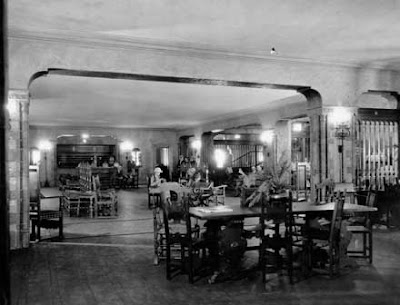 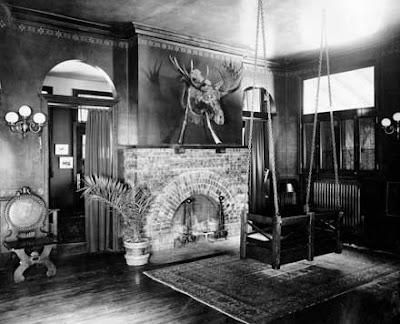 There are more interior photos here.

With the exterior designed by architect Charles Whittlesey and the interiors by Mary Colter, the Alvarado was considered one of the crown jewels of the Harvey House hotels in the west, incorporating native culture into its mystique, identity and Mission Revival and Craftsman styles. 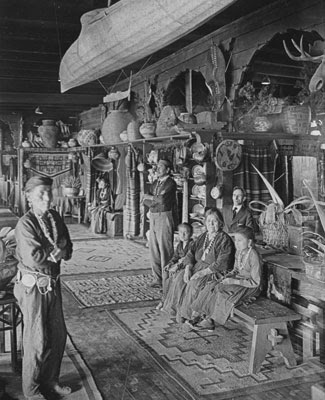 Beulah is second from the top in the photo below with three other Alvarado Hotel Harvey Girls. The appearance and demeanor of Harvey Girls, on and off the clock, were held to very high standards.

Beulah stayed at the Alvarado for nearly a year. In addition to the $17.50 monthly salaries earned by Harvey Girls (about $450 today) at the turn of the last century, they received gratuities plus free lodging and meals. For single young women with no families to support, it was a pretty good deal given the alternatives of being school marms or housewives.

Some of the finest chefs in the nation also were employed at Harvey Houses, where travelers and other customers experienced a high standard of fine dining and gracious service in the large area of rural Kansas, Texas, Arizona and New Mexico generally known at the time as the wild west.

The 1946 MGM musical spectacular "The Harvey Girls" starring Judy Garland memorialized the profession of Beulah and so many others whose job it was to bring civility and hospitality to the wild west. The film, based on a novel with the same title, won an Academy Award.

Being a Harvey Girl isn't the end of Beulah's story.

She left the employment of the Fred Harvey Company in January 1903 after she got a telegram telling her to come home to Lebanon because her father, my great-grandfather Edward Merritt Easley (1846-1903), had passed away.

Beulah stayed in Lebanon for a few months to help her newly widowed mother May, who still had four boys to raise in the midst of her grief.

Then she headed off for another grand adventure, again all by herself, this time to San Francisco. She put her waitressing skills to work at a downtown restaurant while living in a nice boarding house and exploring every inch of that city.

She met Nicholas Kramer at some point. He was a German immigrant five years her senior who arrived in San Francisco in 1889 and owned a bakery where he made bread and cakes and pastries and such. They eventually married and she worked the front counter.

The bakery was destroyed as a result of the April 18, 1906, San Francisco earthquake and subsequent fires. 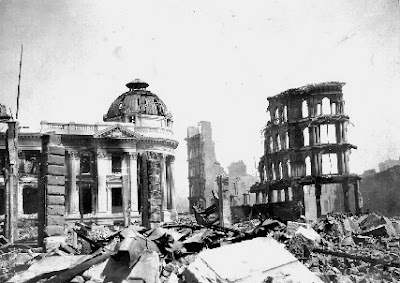 A few months later Nick and Beulah moved to Los Angeles County where they started a new life -- and a new bakery -- in Redondo Beach.

I have never come across a photo of Nick Kramer. I wish I knew what he looked like. My genealogy trail on him comes to an end with the 1930 U.S. Census, which shows him and Beulah still living in Redondo Beach and working in the bakery. They never had any children.

Beulah died of breast cancer in 1931 at a hospital in Los Angeles.

Although there are many more photos of Beulah, for the purposes of this blog post, here is the final one I'll include of her (I created the circle), taken in 1930 on a visit home to Lebanon when she was 48 years old.** 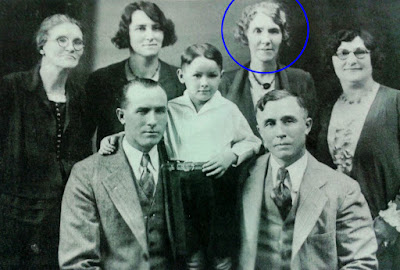 After she married Nick, did she ever feel trapped working in bakeries? As she greeted customers, placed scones in boxes tied up with string and rang them up at the cash register, did she long to hit the road or the rails and embark on another exciting adventure? Or was she perfectly content in marriage, happily staying put?

We will never know.

What I do know, or choose to believe, is that she watches over me.