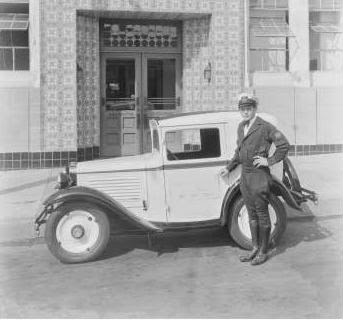 John wins with his 1:02 p.m. Tuesday guess "It is the Royal Laundry Building on South Raymond Ave at Bellevue. This was the former site of the Pasadena Grand Opera House. Could this be a delivery service for the laundry?"

In the 1930 photo above, a delivery man poses with an American Austin coupe in front of the Royal Laundry complex at 443 S. Raymond Ave. at Bellevue Street.

Here is the original photo before I retouched it (badly) and cropped it: 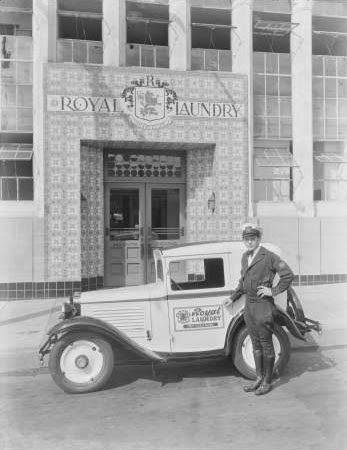 Established in 1910 just down the street at 461 S. Raymond Ave., Royal Laundry catered mostly to luxury hotels and wealthy residents. By the mid-1920s, laundry services throughout the country were using the advanced technology of industrial machines for washing, drying and ironing, and Royal Laundry was no exception.

The business moved to this new complex in 1927 designed by architect Gordon B. Kaufmann, who also designed Hoover Dam and the Athenaeum at Caltech. For this new complex, the façade and other exterior architectural elements were intended to represent the level of service, efficiency and cleanliness Royal Laundry provided.

Here is a photo I took of the entrance yesterday: 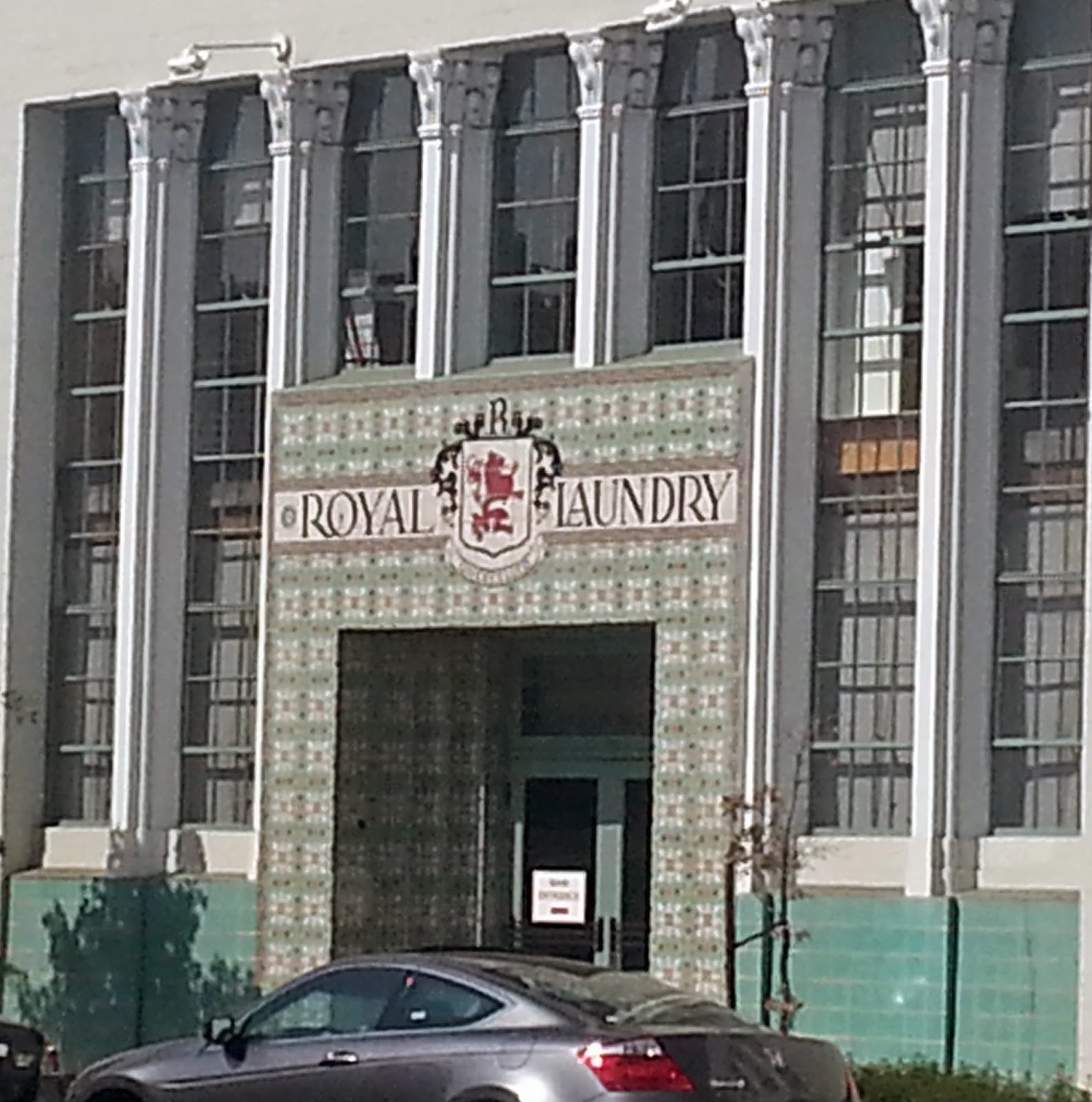 Not long after, a drive-up service was added to the south of the main building to adapt to the increasing use of automobiles. Slightly raised lettering on the arrow that got painted over reads Drive-In & Save. This building in the complex now houses medical offices. When I was there yesterday, three or four Dial-A-Ride vans dropped off and picked up some elderly patients. 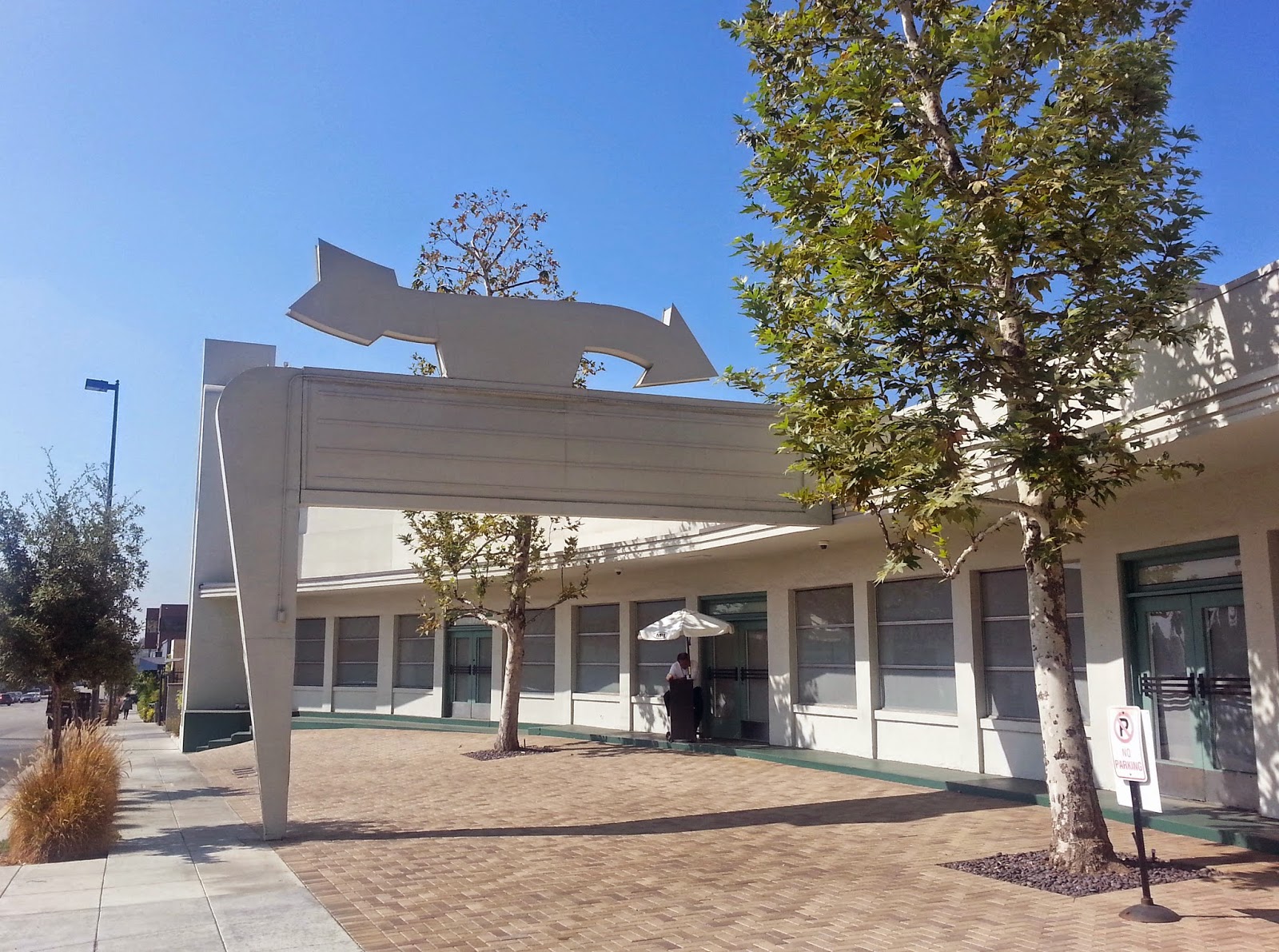 Royal Laundry closed in the 1980s and the complex sat empty for several years. To prevent demolition or major exterior changes, the main plant, drive-up building and annex building were listed in the National Register of Historic Places.

During the years it was closed it was certainly not unused. Filming for several movies and TV shows took place there and the Backstreet Boys filmed their "As Long As You Love Me" music video there. 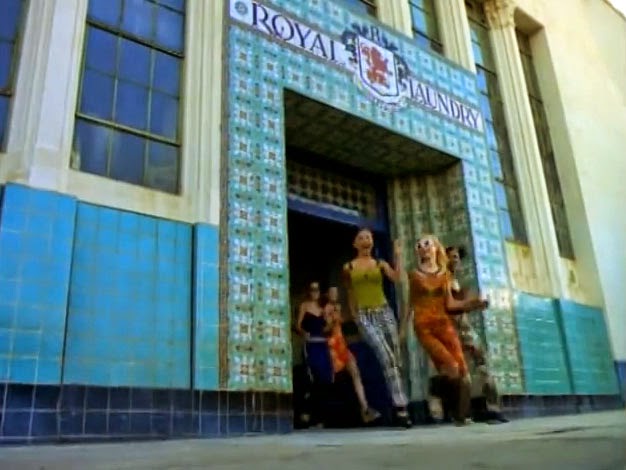 Beginning in 2002 the building underwent a three-year historic preservation project and interior renovation after it was purchased, and then it was leased for the Disney Store worldwide headquarters. 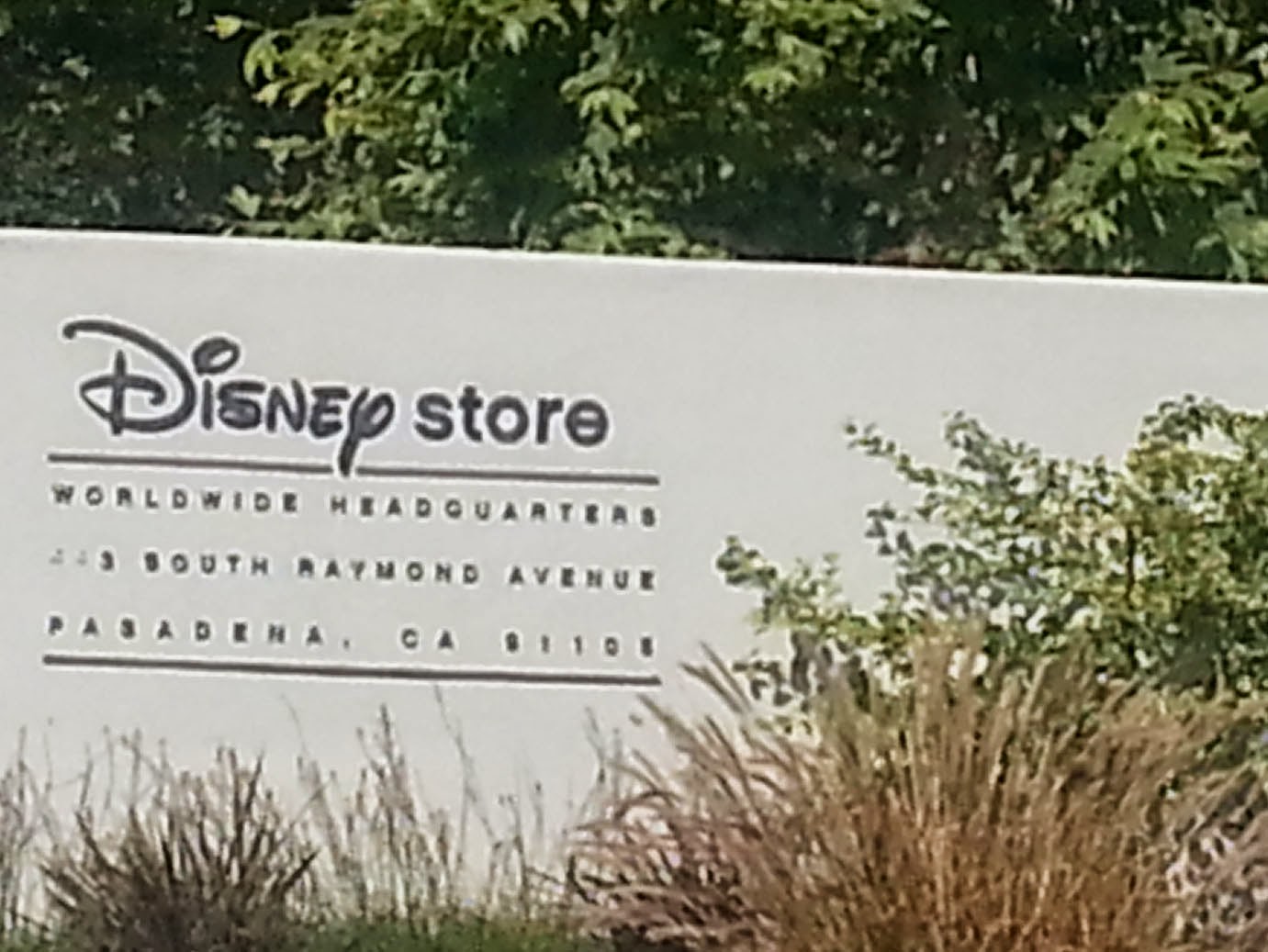 Here is the exterior of the entire complex, looking south to north and then north to south:

The historic exterior of the complex now belies the modern, colorful, modular interior designed for Disney Store headquarters by Clive Wilkinson Architects to create a lively and inspiring workplace environment: 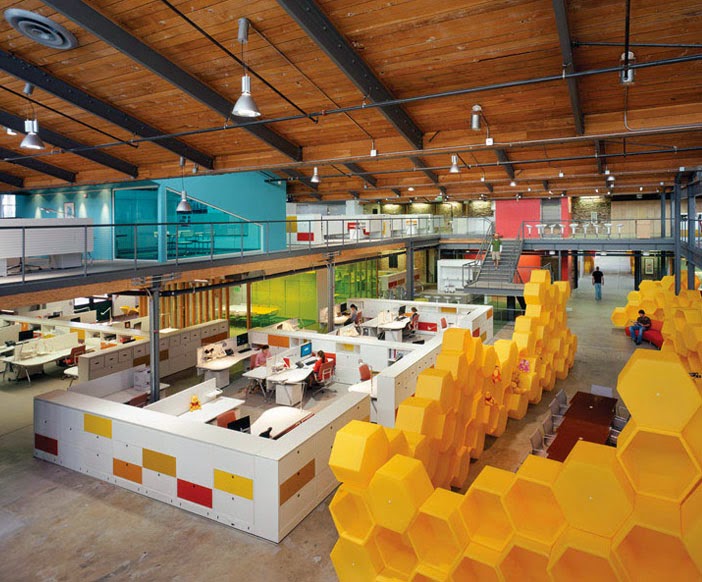 The historic ceiling is intact. 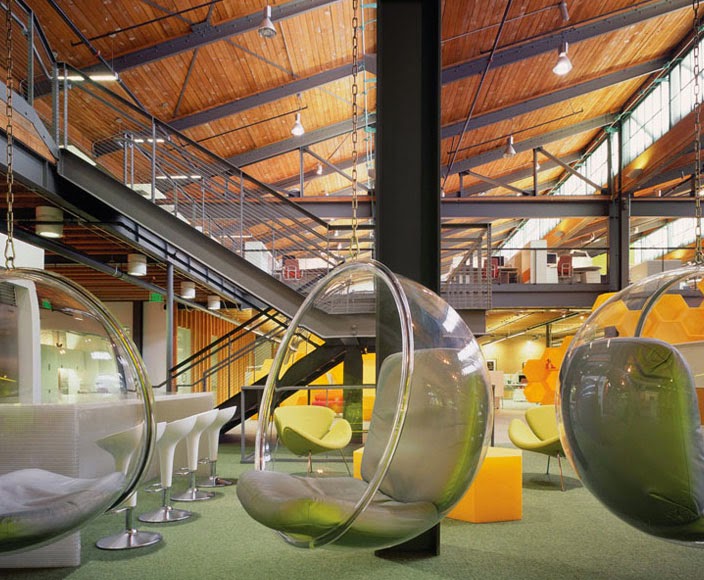 Oskar Mendez, a vinylmation character artist, is one of the 230 employees there. He's an Art Center College of Design grad. 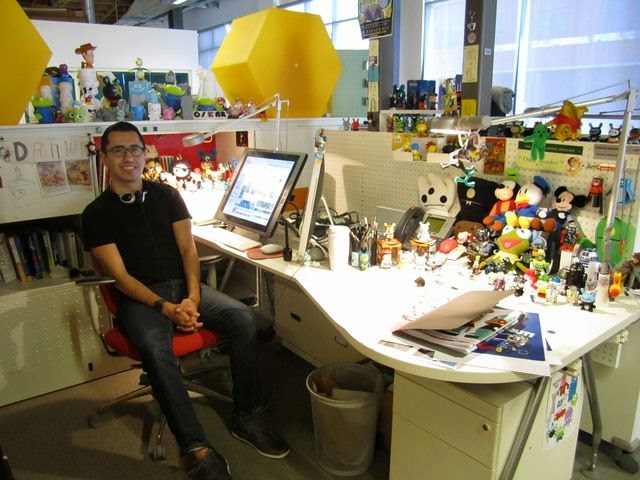 See an interesting interview with Oskar, with even more photos, on the Disney Store blog.

This fun topiary, which cannot be seen from the street, frames part of a walkway between one of the buildings and the parking structure.. 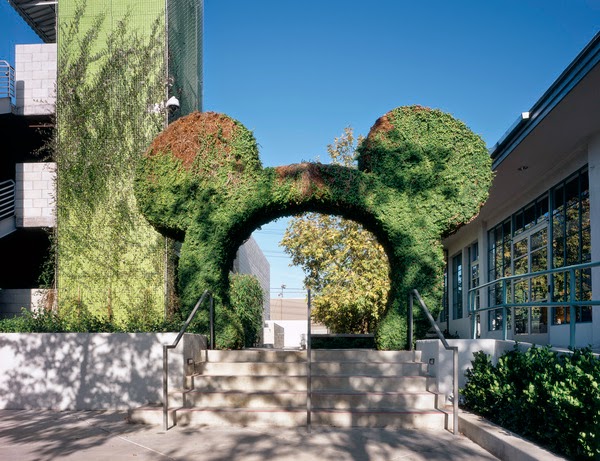 I wanted to capture some of the complex's exterior architectural elements yesterday: 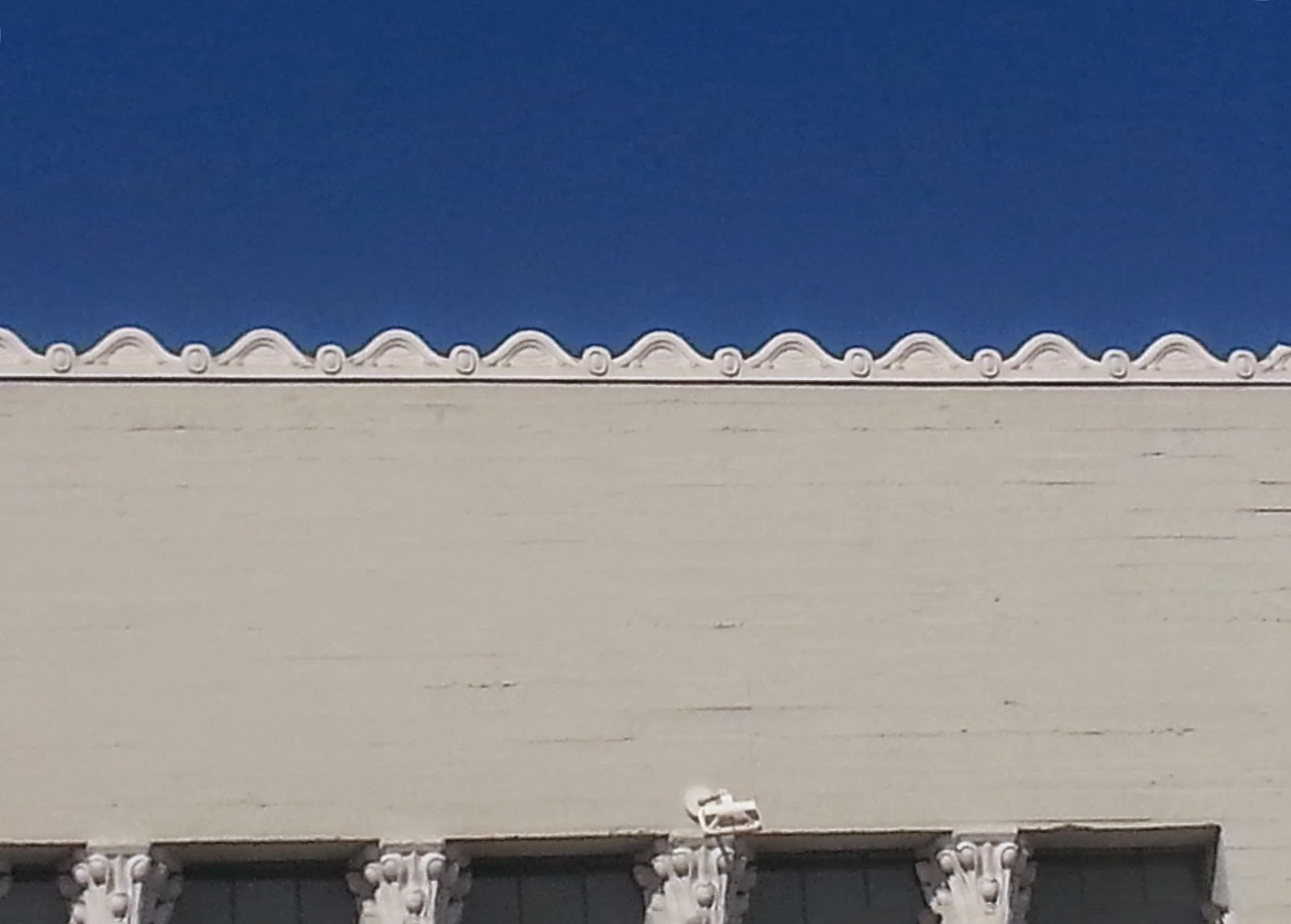 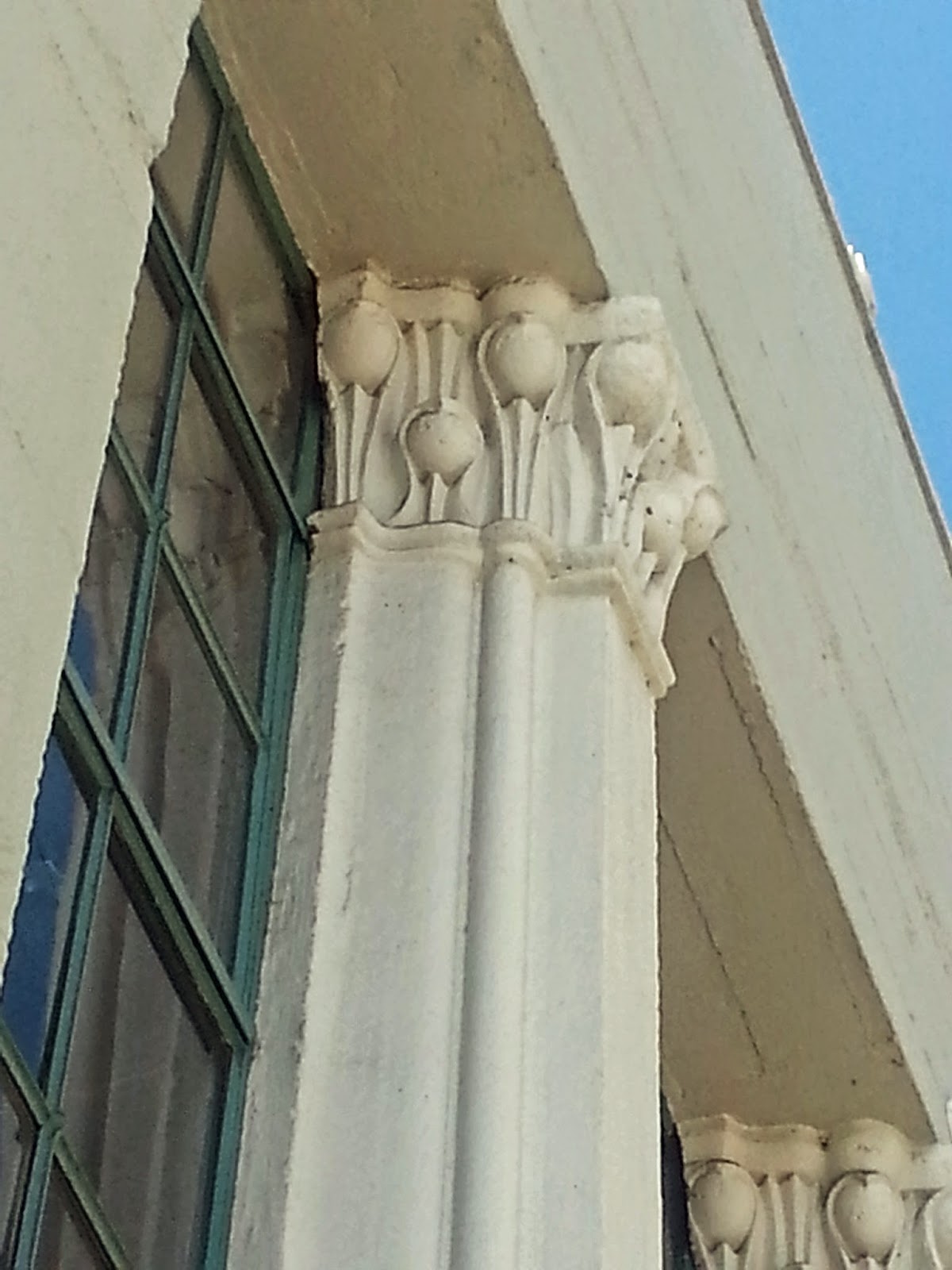 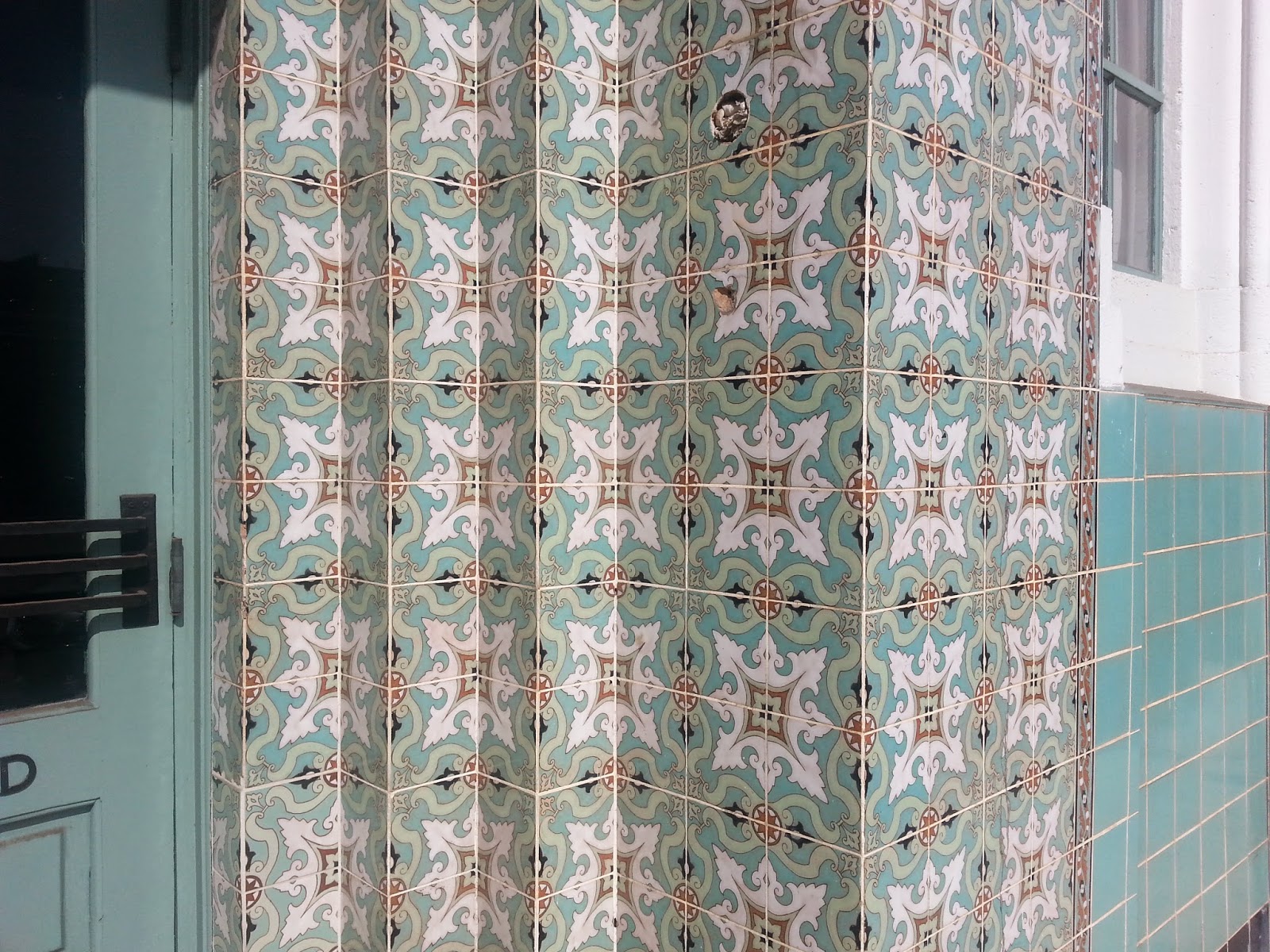 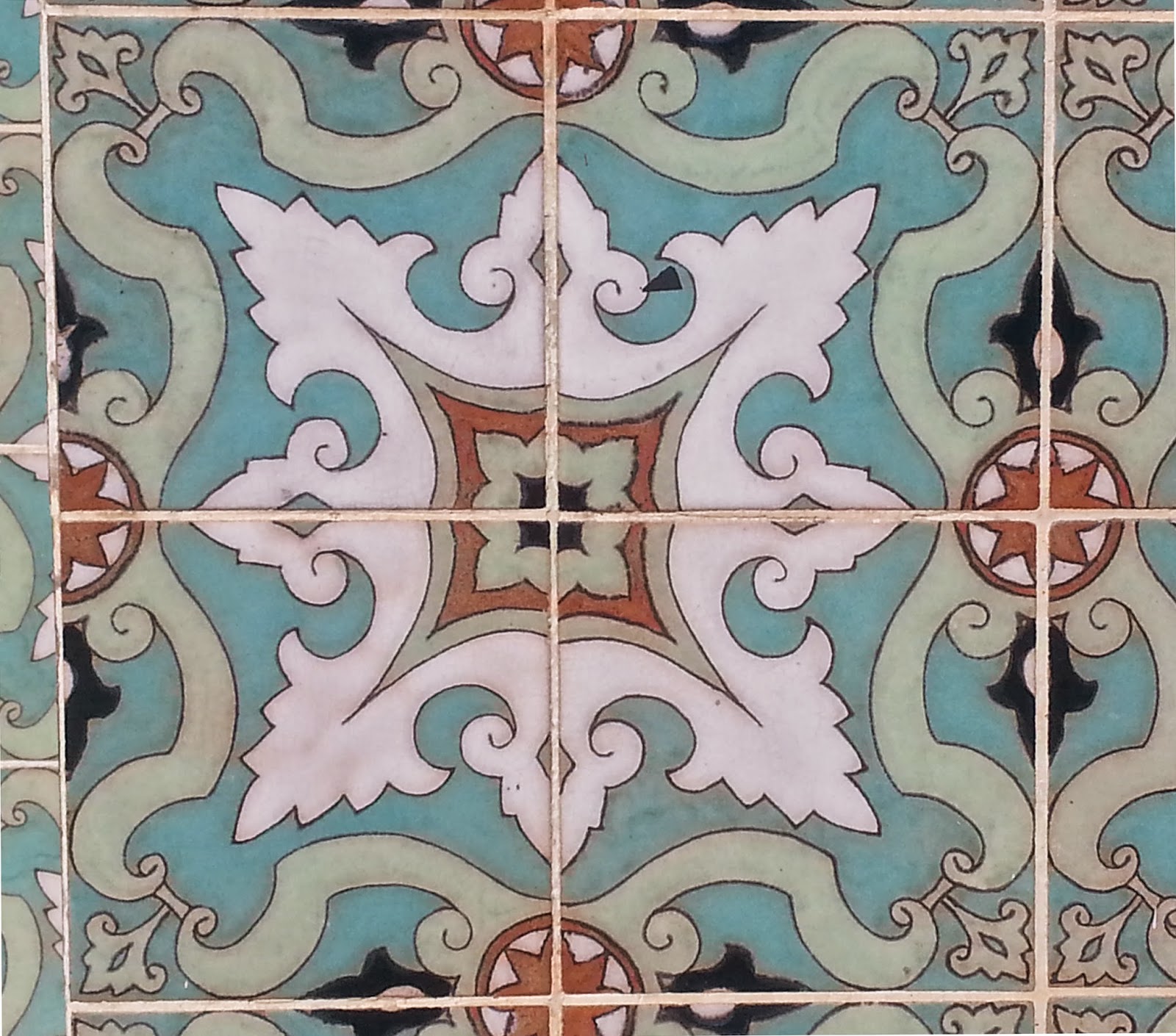 The complex was sold two weeks ago. Will Disney Store worldwide headquarters stay? I certainly hope so. They signed a 13-year, $23 million lease agreement when they moved into the complex. Will that hold with the new owner? I'm not an attorney or a commercial real estate professional. We'll see.

P.S. -- John is correct that Royal Laundry was built on the site of the former Pasadena Grand Opera House. That's another story! 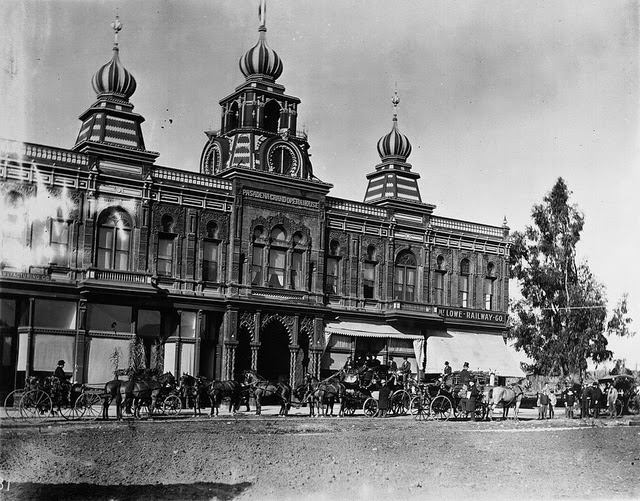 I shot all the exterior color photos of the Royal Laundry complex with the exception of the topiary and the still of the music video. Additional photo credits: Huntington Library, Los Angeles Public Library, Backstreet Boys, Clive Wilkinson Architects, Colorcoat. Also, many thanks to my friend and former employee Gregg Guenthard, who is with the Petersen Automotive Museum, for identifying the vehicle.
Posted by Ann Erdman at 12:00 AM