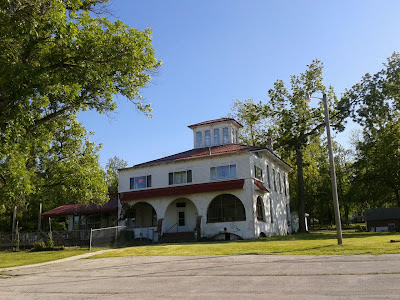 Yesterday I went to the home of my great-great-great grandfather John Shelton Reding (1816-1892).

He built this home, inspired by the design of Spanish missions, in what was then known as Shoalsburg Township in Newton County, Missouri, close to Joplin.

In the 1930s the family made it the site of a resort and restaurant. It was damaged during the terrible tornado that hit the Joplin area last year, and thankfully it is still standing. You can see some of the damage next to the left arch. Most of the damage is at the back of the structure.

It's still owned by the family. When I was last there, about 10 years ago with my late mother, we had lunch there and cousins gave us a tour of the upstairs areas where historic photos graced the walls. My mom took photos of the photos, but sadly she lost her valise of documents and photos before we returned home.

I was hoping to do the same thing this trip, but since the building is closed for restoration I missed the golden opportunity.

I also wanted to learn more about Reding's Mill, which John Shelton Reding built in the 1832 and which served the needs of residents in a 50-mile radius that encompassed portions of Missouri, Arkansas and Kansas.

But I was at a dead end.

Then I met reference librarian Mary Rountree in the genealogy room at the Newton County Library in Neosho, Missouri.

Don't you just love librarians? Mary had a file on Reding's Mill and John Shelton Reding but no photos.

I copied the articles and other information and was preparing to leave when Mary said, "You might want to drive over to the Redings Mill Fire Department. They have historic photos of Reding's Mill there."

I didn't know there was a fire department in the area or that the town was now called Redings Mill.

So off I went on my next big adventure.

Someone left off the apostrophe when the new town was founded. 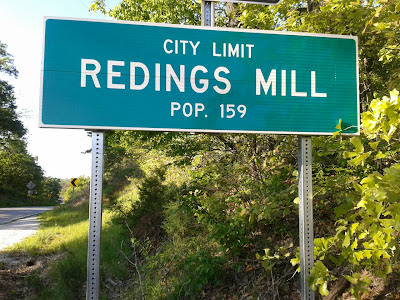 Sure enough, the Redings Mill Fire Department is just up the road from the Reding home-turned-restaurant: 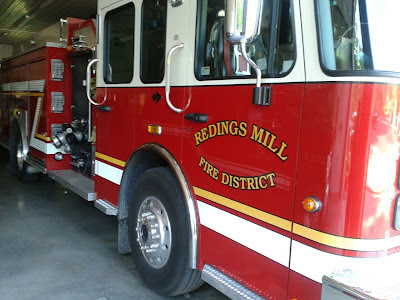 It's an all volunteer fire department, which means they work short shifts, get all of the training and none of the pay. But in talking to the five firefighters on duty, theirs clearly is a labor of love.

Fire Captain Ed Powell was very kind and introduced me to everyone. They were all thrilled to meet a descendent of John Shelton Reding and treated me like royalty!

They even gave me my own Redings Mill Fire Protection District patch, showing Reding's Mill burning and a firefighter trying to extinguish the flames: 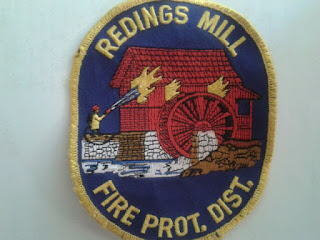 Here's Captain Powell next to some of the framed photos of Reding's Mill: 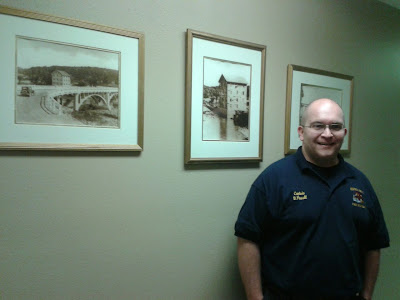 He was kind enough to take them off the wall and hold them so I could take photos of the photos but when I started to post them here I noticed my reflection in the glass of each and every one!

So I went to the Internet, with new knowledge of the dropped apostrophe, and found these: 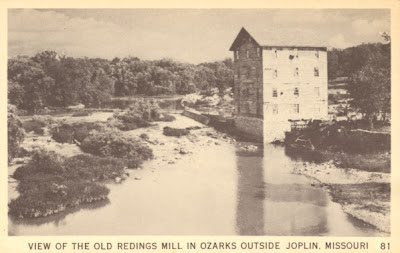 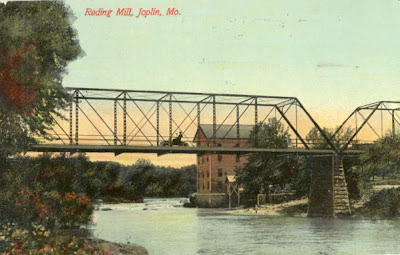 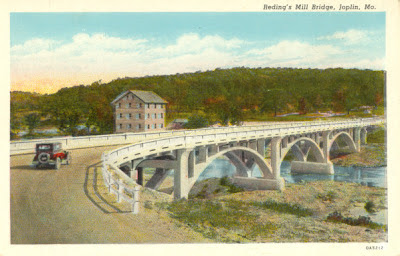 Here's some of the information that was in the file provided by librarian Mary Rountree:

When John S. Reding settled in Newton County, Indians outnumbered white men. His first grist mill, built on Shoal Creek in 1832, provided a social center as well as a place for homesteaders to grind their grain. Reding founded Shoalsburg, a small village that failed to grow into the city the founder envisioned. As Reding prospered, he replaced the small mill with a larger one in 1854.

Then the Civil War hit, and the area suffered devastating raids by both armies. Reding's sympathies lay with the South. Union officers sent soldiers to destroy the mill; however, they were confused about the location and burned the mill at Grand Falls instead. To their horror, the Union soldiers discovered that the Grand Falls mill was owned by Union sympathizers. Reding's Mill had to be spared because it was the only mill left in the area at which grain could be ground for townspeople and Union troops.

In 1868, Reding erected the picturesque mill that became one of the most photographed structures in southwest Missouri...

...The Dalton Gang stopped at the mill on their way to Coffeyville, Kansas. It is not known how it happened, but Jake Reding, son of John S. Reding, in some manner obtained a large Bowie knife from one of the Daltons. The Daltons then proceeded to Coffeyville, where they were all killed while attempting to rob the Coffeyville Bank. The Bowie knife is still in the possession of the Reding family...

...Reding's Mill burned to the ground in 1936. All that remains are a few pieces of the solid foundation which still breaks the flowing waters of Shoal Creek."