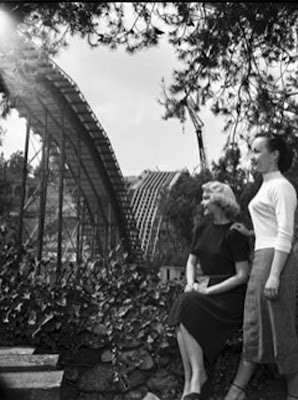 
In the March 1952 photo above, college students Shirley Mackey and June Woodard observe the wooden framework for Pioneers Bridge, the freeway bridge that runs parallel to the Colorado Street Bridge.

Here's construction superintendent Paul Paulson in a cheesy shot pointing at the framework: 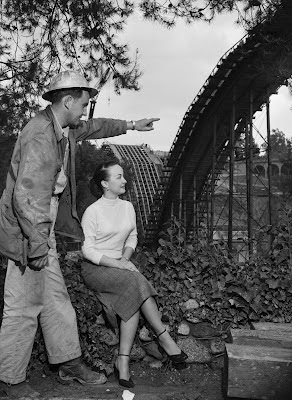 I love this photo shot from under one of the Colorado Street Bridge arches: 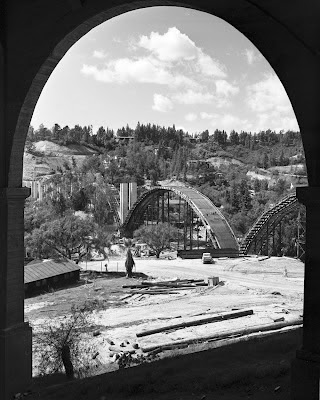 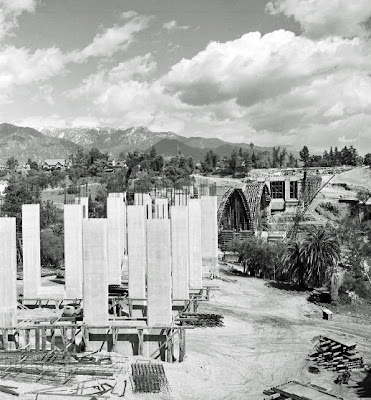 Those wooden arches were covered in concrete prior to construction of the deck: 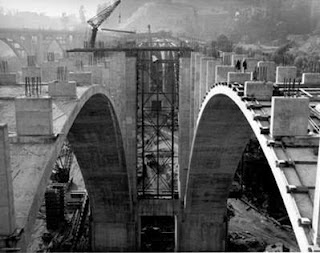 And here's the deck in progress, with the Colorado Street Bridge on the right and Vista del Arroyo in the background: 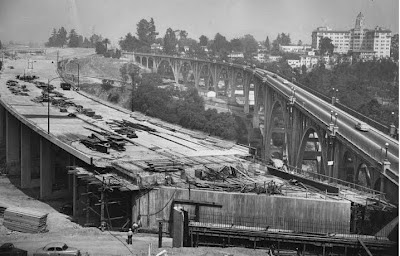 When the Foothill (210) Freeway was planned in the early 1950s, the California Department of Transportation made known its intention to demolish the Colorado Street Bridge. But after much public outcry and appeals from the City of Pasadena and other organizations, Caltrans allowed the bridge to stand and built their own bridge parallel to it.

Pasadena Pioneers Bridge is named for the party of settlers led by Dr. T.B. Elliot, a physician who held meetings in his Indianapolis home for people interested in moving to California and settling where the sun would shine year-round. After extensive fact-finding, the party of settlers came by train to San Francisco, then by ship to San Pedro, then wagons to what became the Indiana Colony.

Ground was broken for Pioneers Bridge in 1951. By then, daily traffic on the Colorado Street Bridge was causing stress to that structure to the point where traffic was not allowed during peak hours.

I did a Mystery History post about Pioneers Bridge three years ago on my Pasadena PIO blog, mostly with different photos and a lot more background information. See that post here.
Posted by Ann Erdman at 12:01 AM