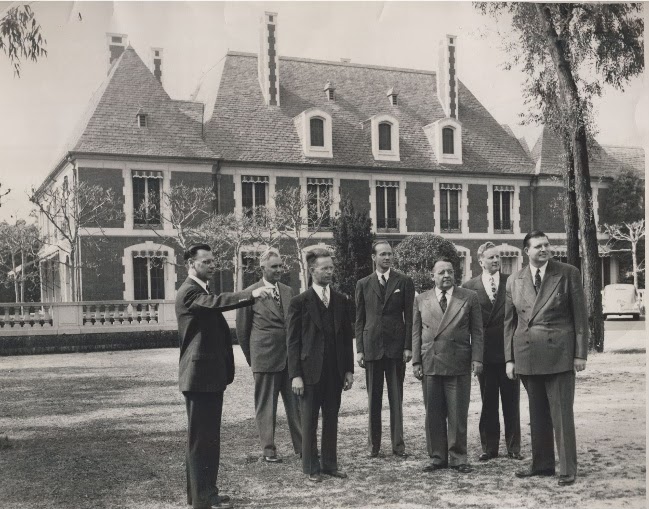 A few of my readers ventured guesses as to the "where are we?" question but nobody correctly guessed "what's happening?" in the two-part Mystery History question.

In the January 1947 photo above, Fuller Theological Seminary founder Charles E. Fuller (second from left) and some members of the founding faculty and board of trustees look over the grounds of the then-five-acre Cravens Estate on "Millionaires Row." The others are Harold Ockenga (far left), Everett Harrison, Harold Lindsell, Wilbur Smith, Arnold Grunigen and Carl Henry.

A long view of the estate: 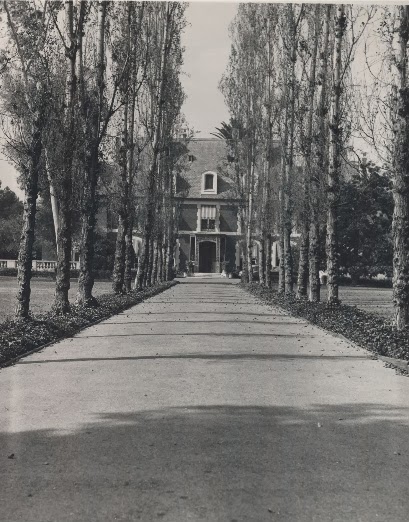 And with their collective academic achievements, their intent was to reform fundamentalism from its separatist and sometimes anti-intellectual stance. Fuller said he hoped the seminary would become" a Caltech of the evangelical world."

The son of a prosperous orange grower, Charles Fuller had been best known for his weekly nationwide broadcasts on the Old Fashioned Revival Hour. Once a week from 1937 to 1968 on more than 600 radio stations, 20 million people tuned in for the live broadcasts, first from the Long Beach Municipal Auditorium and then a Hollywood recording studio. The broadcasts included Fuller's evangelical messages as well as what many considered the finest gospel quartet and chorus on radio. 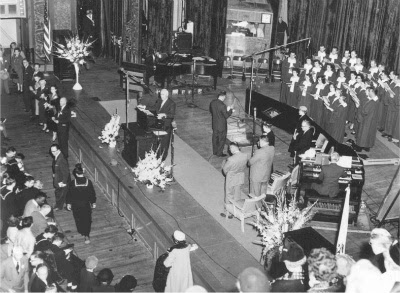 As a result of announcements he made on the Old Time Revival Hour, 39 students enrolled in Fuller Theological Seminary the first year. 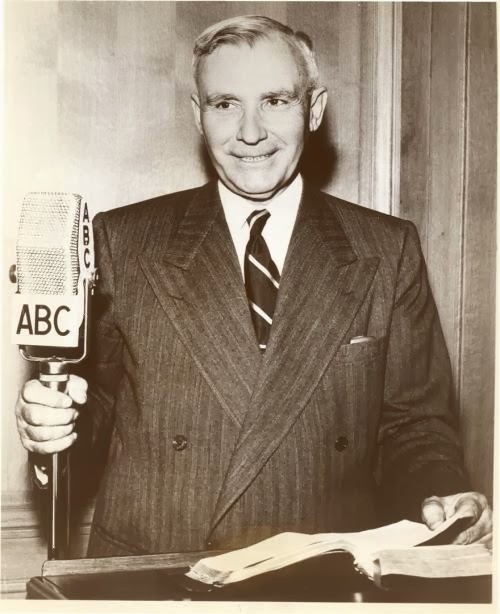 A resident of San Marino, Charles Fuller had successfully bid on the Cravens Estate property in 1947 with funding from his family's Fuller Evangelistic Foundation. On the day of the sale, no other bidders materialized so the estate was his for $145,000. His goal was to have some necessary work done over the spring and summer on the 32-room mansion and open a seminary in the fall of that year.

But the divine intervention he was hanging his hat on stopped there. In June 1947 the City of Pasadena denied a proposal to convert another mansion in the area into a hotel. He was told there was little hope, as a result of the commission's precedent-setting decision, of converting a residence into a school.

But he pressed on anyway with the conversion of some of the mansion's rooms into classrooms, hoping against hope that a holy hand would intervene.

By September 1947 faculty began to arrive and Wilbur Smith had his 14,000-volume library shipped there.
On Monday, Sept. 27, registration took place at the estate, with qualifying exams and some classes taking place Sept. 28.

Then the fire marshal arrived on the scene.

He ordered that the mansion could be used for faculty offices, the seminary library and student dormitories, but it would be illegal for it to be used as a school.

Thanks to Charles Fuller's friendship with Dr. James Henry Hutchins, pastor of Lake Avenue Church two miles away, arrangements were made quickly for the seminary classes to move the church's Sunday school building. The students began their studies there the next day and classes remained there for six years while the student population grew to 250. Many of the seminarians rode bikes across town every day from the Cravens Estate to Lake Avenue Church. 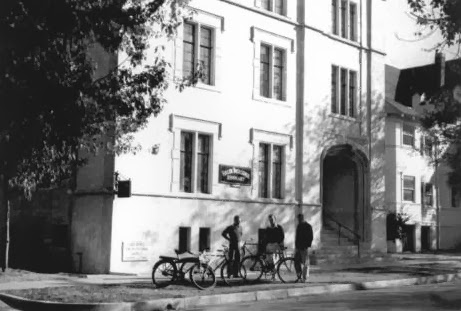 One student wrote many years later: "We members of that first class will never quite forget the incongruity of of hearing Carl Henry's insights into the theory of religious knowledge while sitting on kindergarten chairs taking notes." Within a few days of that first class, adult-size furnishings were delivered to the Sunday School building.

The opening convocation for the Fuller Theological Seminary took place at the Pasadena Civic Auditorium.on Oct. 1, 1947, with a speech given by Ockenga, the seminary's first president. 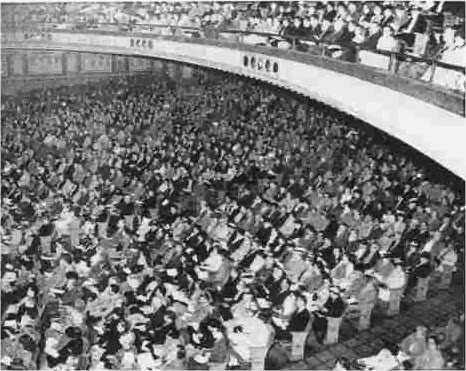 The Fuller Women's Auxiliary was formed with Charles Fuller's daughter-in-law Ruth at the helm. Here she is (left) with Mrs. Richard Curley (wife of the seminary's business manager) and Mrs. John McGill at the gates of the Cravens Estate (their first names are not on the photo): 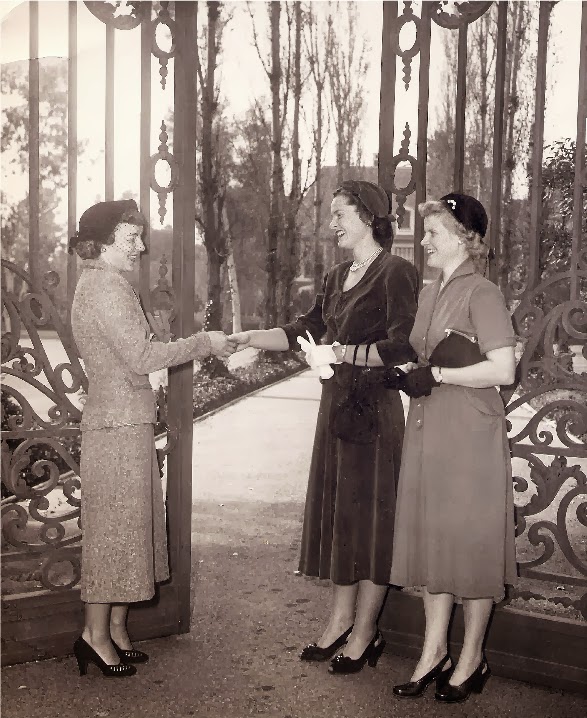 In 1953 the seminary moved to the present location of its main Pasadena campus on Oakland Avenue two blocks east of Pasadena City Hall. 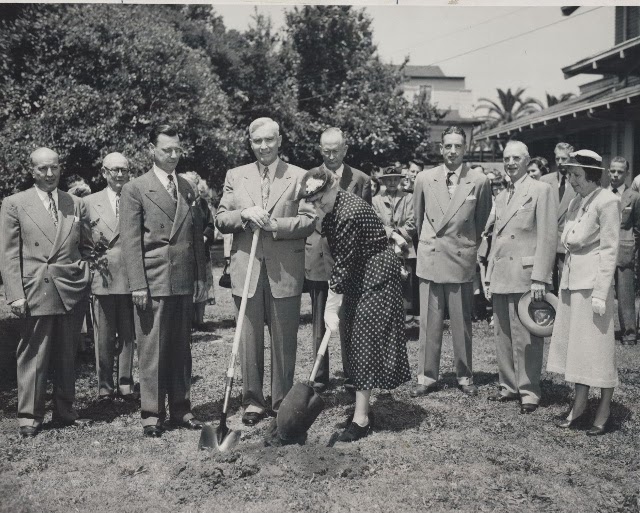 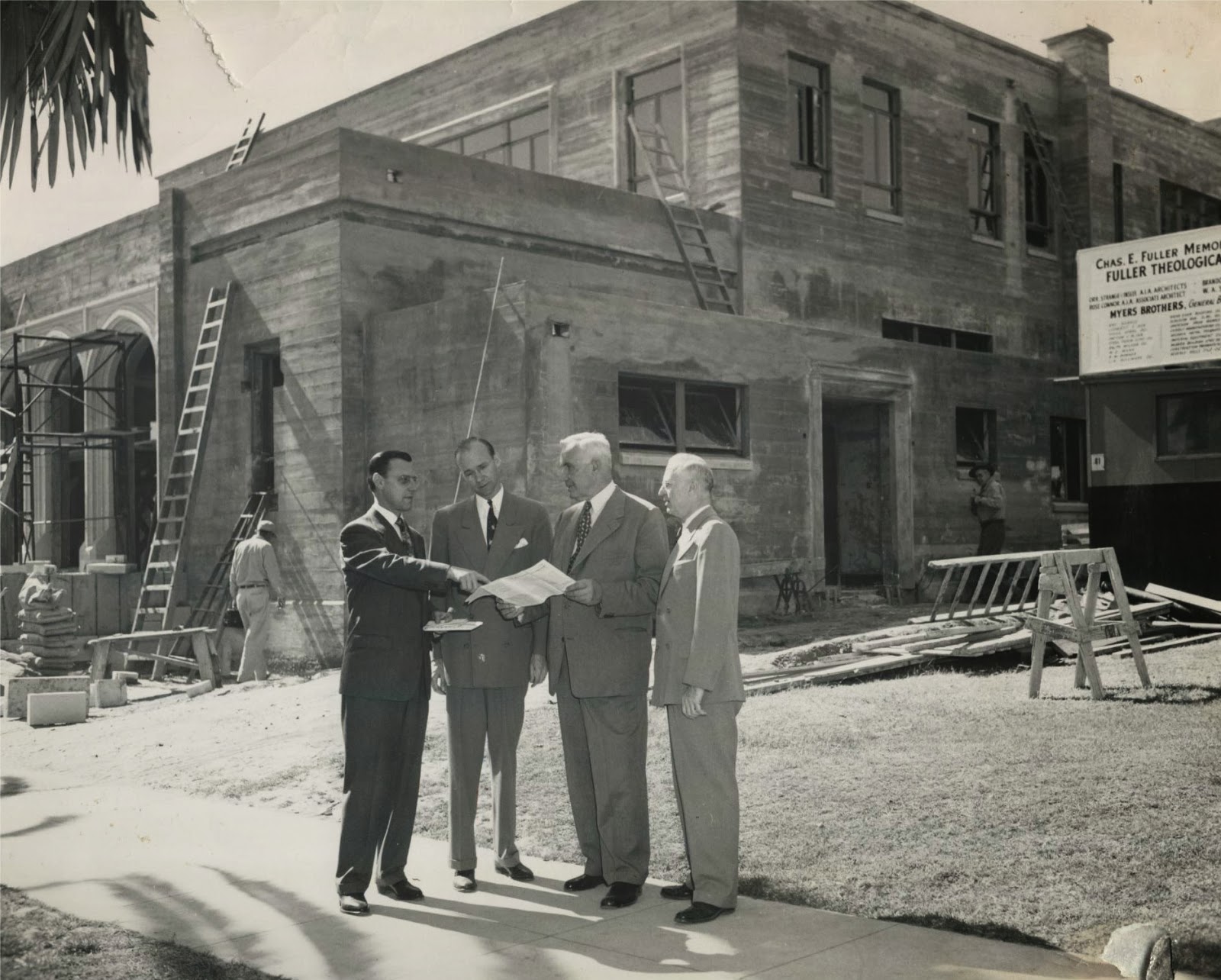 In 1963 the McAlister Library was completed and joined to Payton Hall by a colonnade of arches: 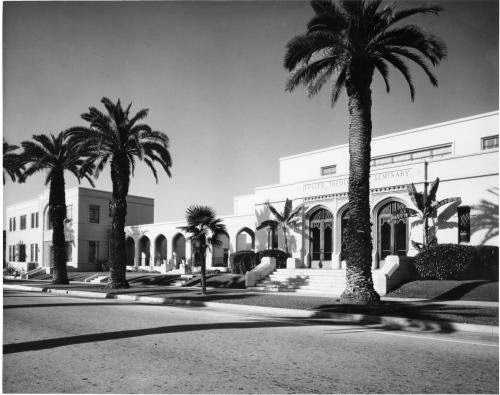 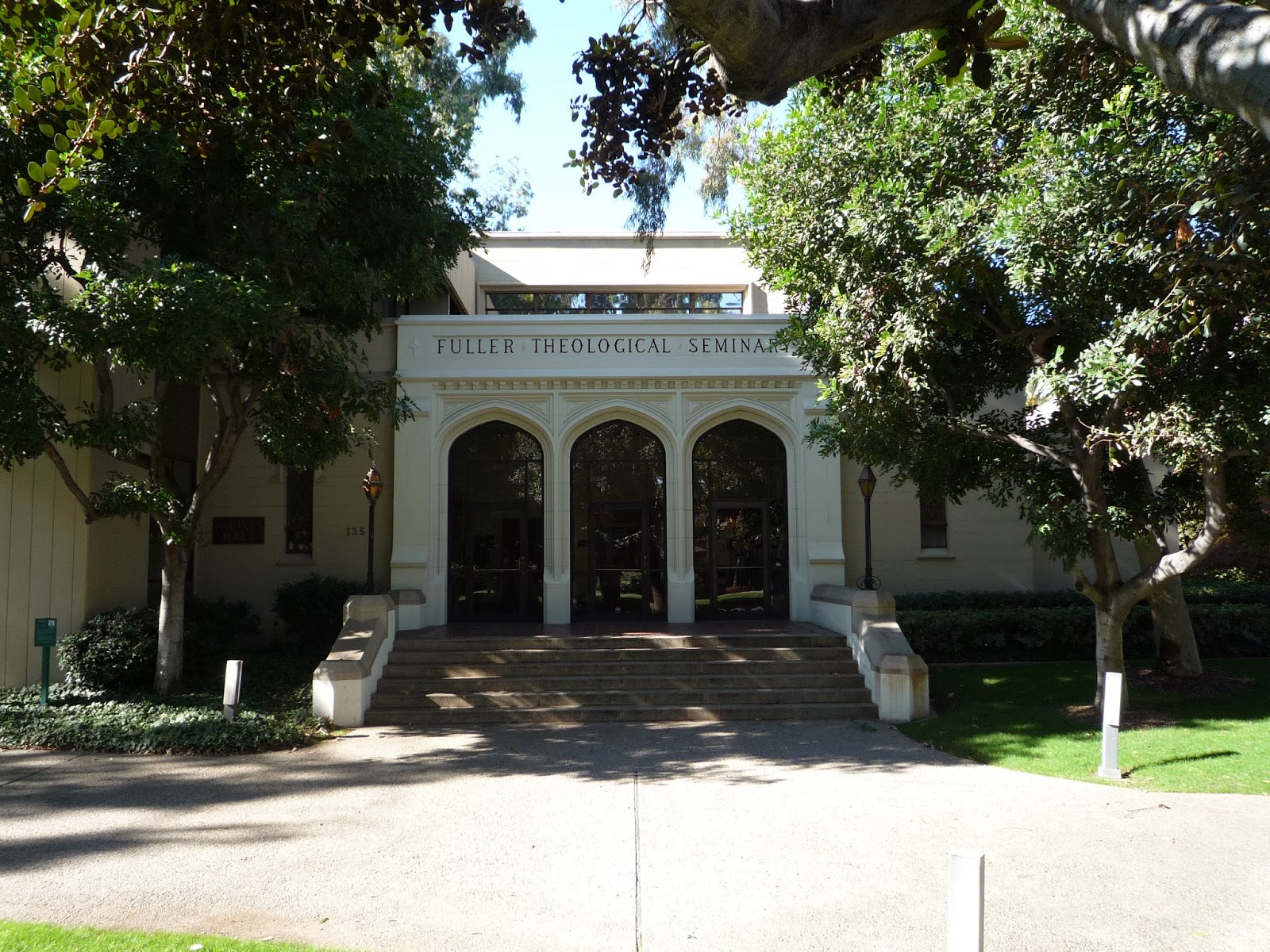 Fuller sits in the midst of several beautiful, historical homes, some of which serve as campus offices. Others are residences for seminary students.

This one houses the Office of Student Affairs and a student lounge. 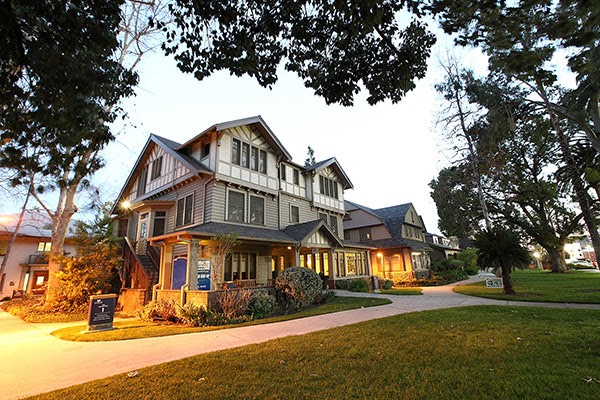 In 1973 Fuller Theological Seminary opened its first regional campuses in other cities for the training of lay persons in the context of local churches. Since 1979 regional campus programs have been in place in California, Washington, Colorado, Arizona and Texas.

Today, Fuller Theological Seminary spans more than 13 acres of classrooms, offices, residential areas, community spaces and parking, and many Pasadenans, whether seminary students or not, enjoy walking through the Arol Burns Mall that runs through the center of the campus. 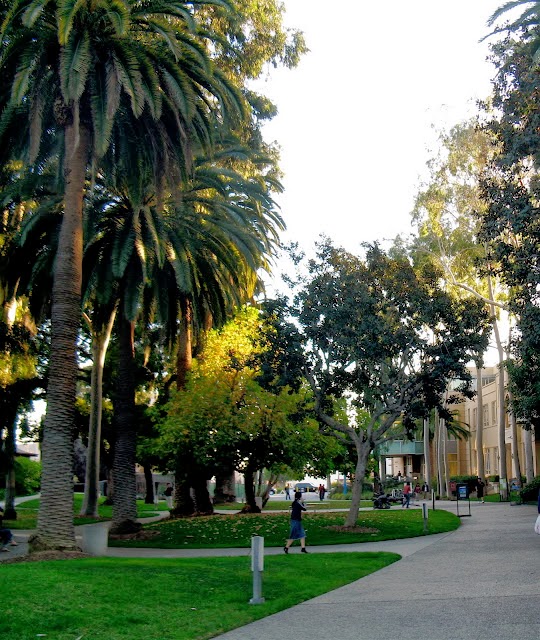 Its newest building is the 47,000-square-foot David Allan Hubbard Library, completed in 2009 with an environmentally sustainable design: 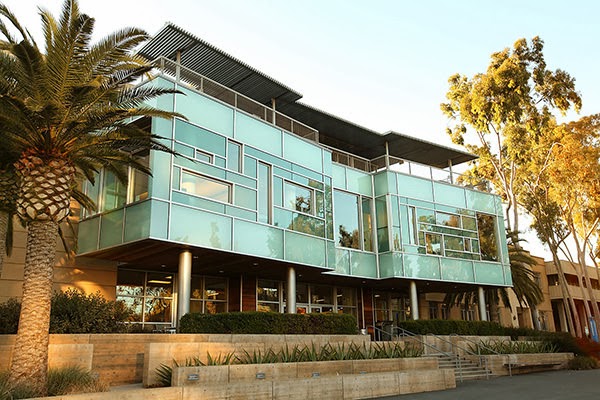 In the 67 years since its founding, Fuller Theological Seminary has grown to a current enrollment of 4,500 students coming from 70 countries and more than 100 denominations. From the single Bachelor of Divinity offered at its inception, Fuller now offers 18 master's and doctoral degree programs. More than 35,000 Fuller alumni minister in churches and communities across the globe.

I want to give a shout-out to Ben Wideman, who came here from Virginia to study at Fuller. His daily The Sky is Big in Pasadena blog was very popular as he updated us on the happenings at the seminary and his student life there. He was part of our blogging community and always came to our blogger picnics and other events that keep us local bloggers connected beyond cyberspace.

Ben graduated in 2011. This post of his was sad for all of us and yet we were so happy for Ben and his family. They were off to Harleysville, Pennsylvania, where Ben is the associate pastor of youth and young adults at Salford Mennonite Church. Now we stay connected on Facebook.

Many thanks to Fuller Theological Seminary and George M. Marsden for the photos.
Posted by Ann Erdman at 8:26 AM