I got so busy that I fell behind on blog posts about Citizens Police Academy so I decided to post a brief recap of the last two classes.

On April 10 (Week 11) we met at the Pasadena Police Department heliport, located midway between JPL and the Rose Bowl Stadium. We learned all about the Air Operations Section. 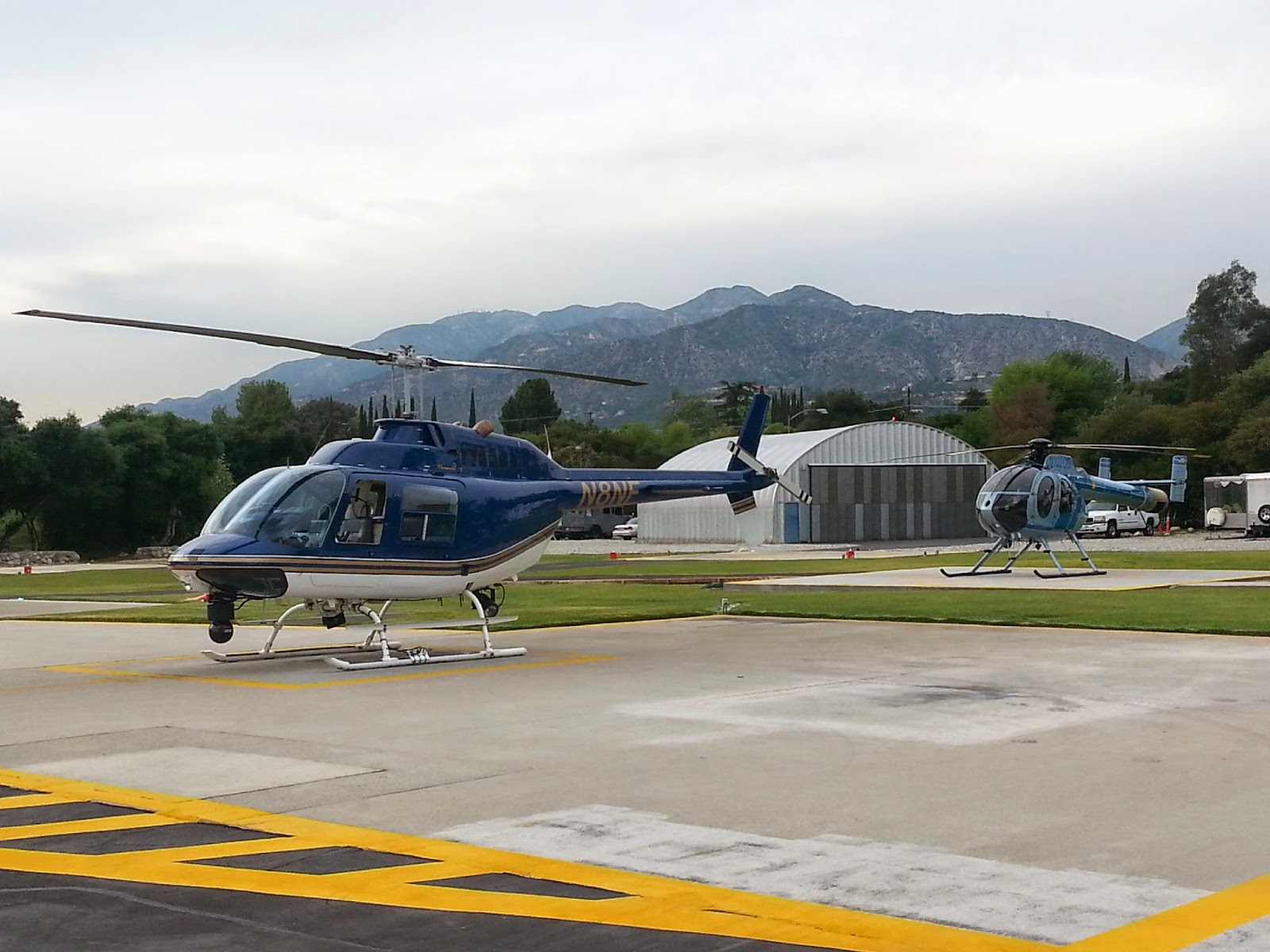 The video at the top of this post will give you details about Air Ops.

Surplus helicopters are donated by the U.S. military and are just shells when they are received. They become Pasadena police helicopters after a lot of mechanical and body work and a nice paint job. 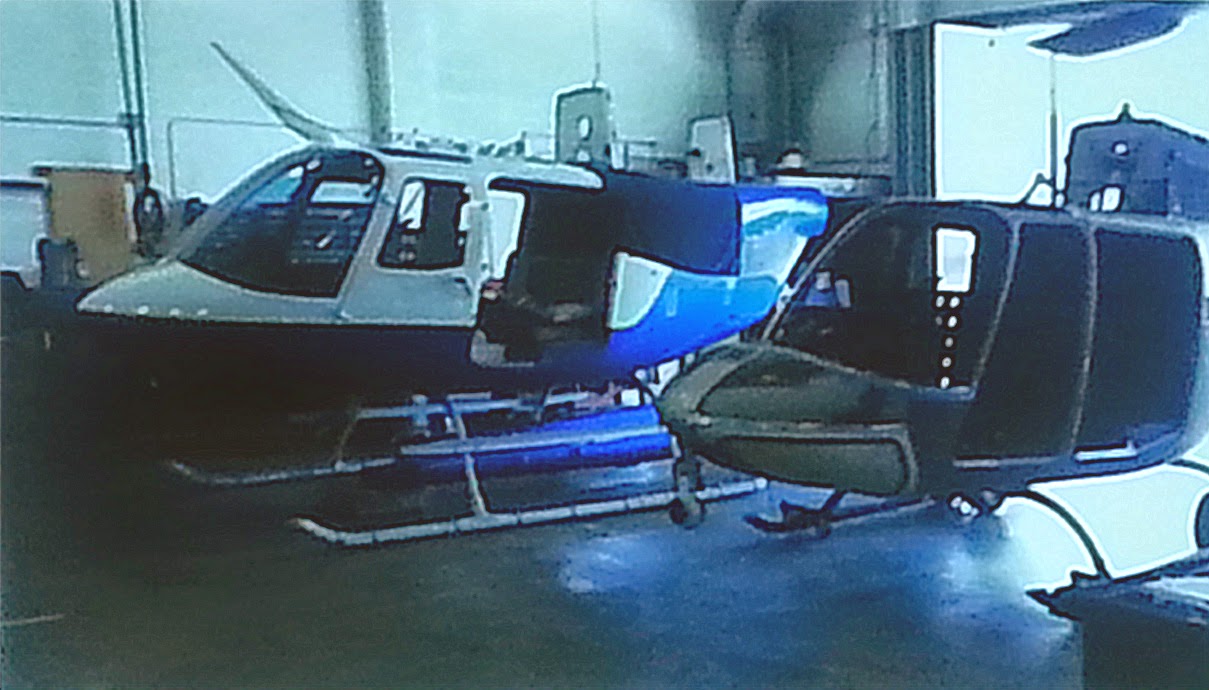 We also learned about the K-9 program. Figo, a Belgian Malinois, is one of the Pasadena Police Department canine officers. He and his partner, Officer Steve Arcand, participate in patrol and narcotics operations. During a really interesting exercise, Figo successfully sniffed out some small, hidden boxes of narcotics. 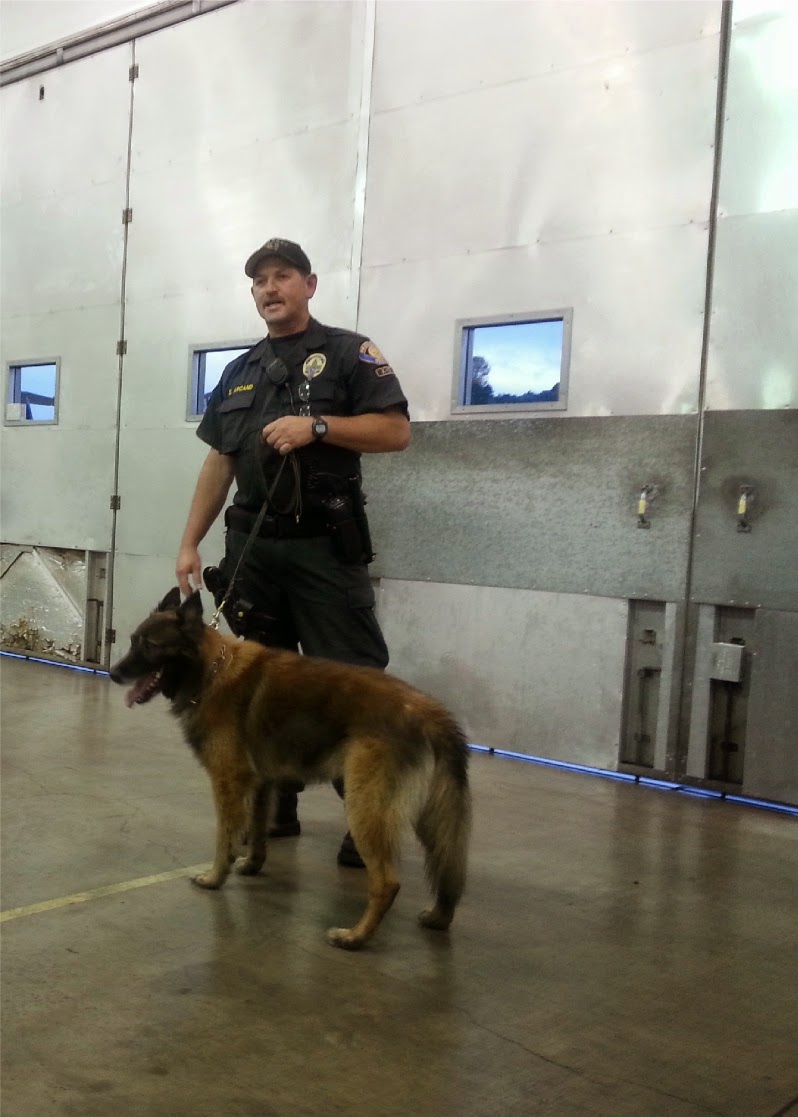 The SWAT team drove the BearCat up to the heliport and told us about their operations. Officer Tai Wotherspoon is one of only two female members of the SWAT team. 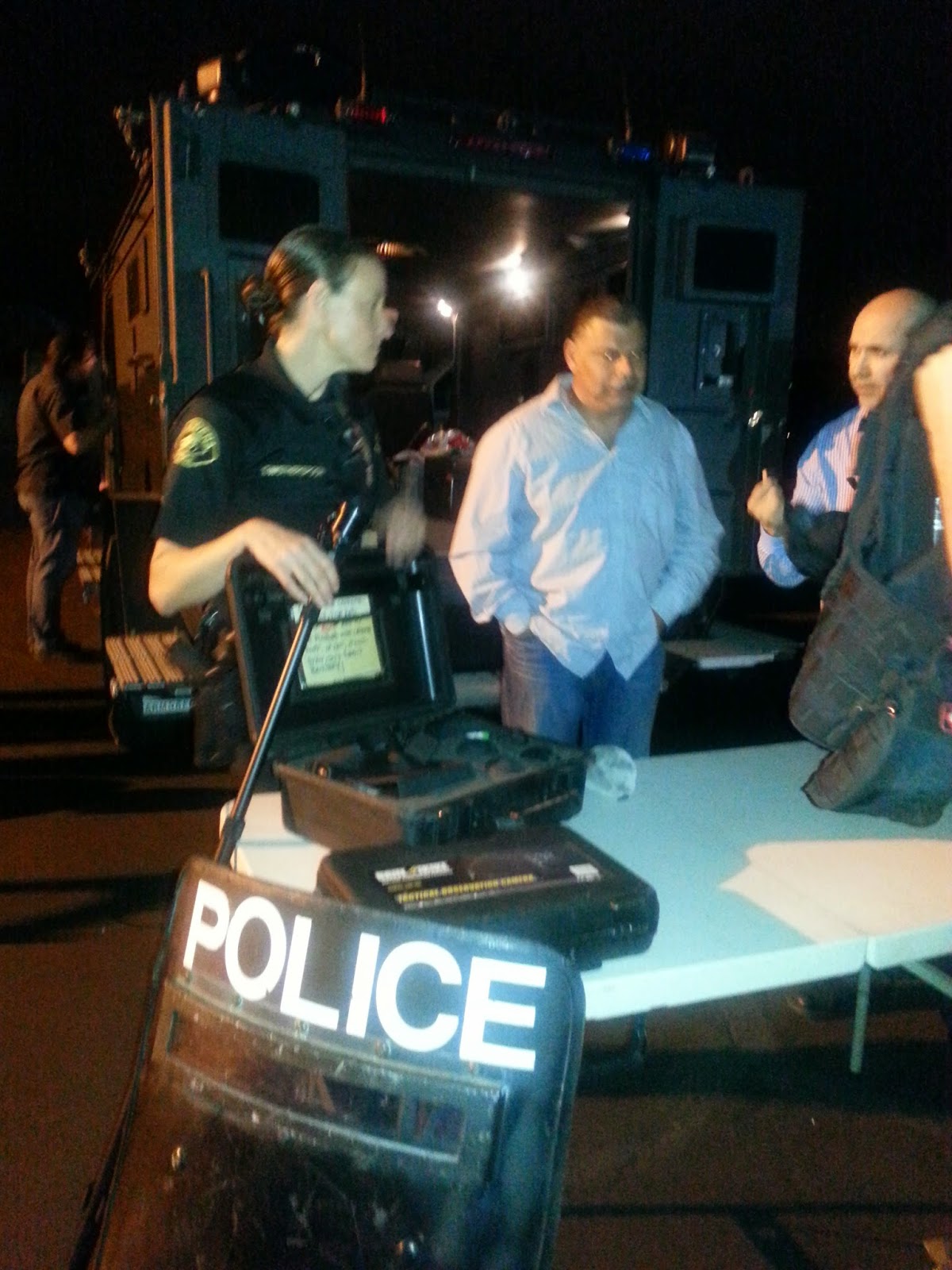 Park safety and the gang unit rounded out week 11.

On April 9 I had my ridealong in a patrol car. I had been on patrol, paramedic and helicopter ridealongs when I was the Pasadena PIO; a patrol ridealong is required for everyone in the Citizens Police Academy class.

I rode with Officer Bill "Ship" Shipman. I knew him from his 12 years on the HOPE Team when I was the Pasadena PIO but hadn't seen him since I retired in 2012. 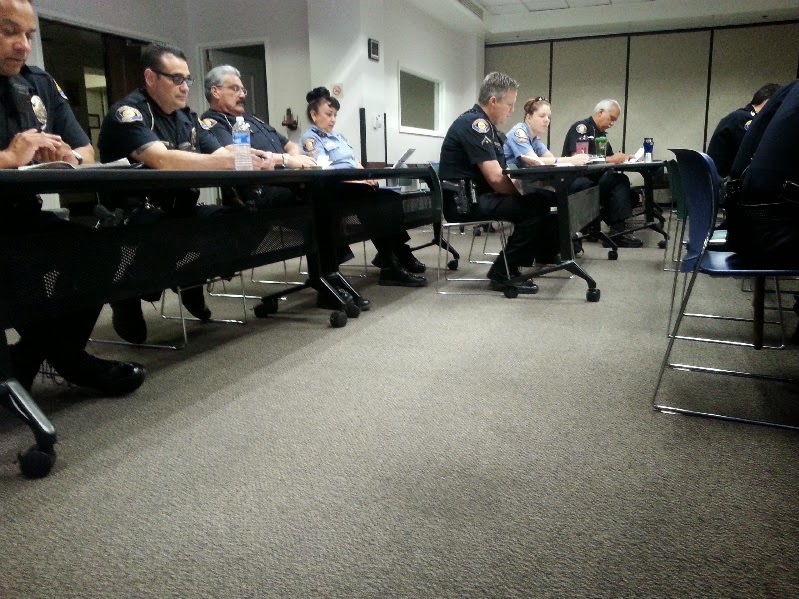 Just before we left, my partner checked the equipment, weapons and systems in the patrol car, and I put on a bulletproof vest. 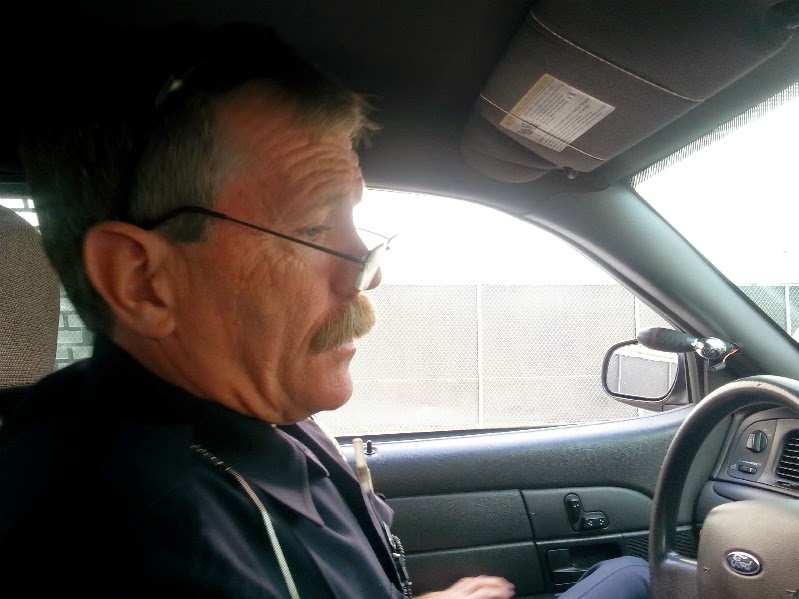 Then we headed out in the Midtown Service Area. Geographically it is the smallest area, but it includes Old Pasadena, the Playhouse District, South Lake and the Civic Center, so it is often the busiest service area. 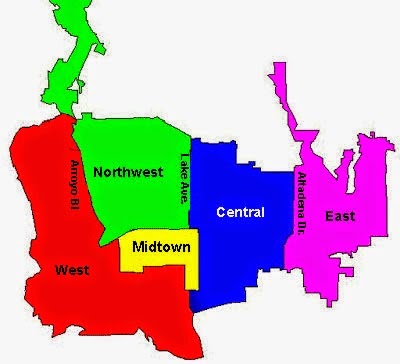 Our time together included a couple of residential alarm calls... 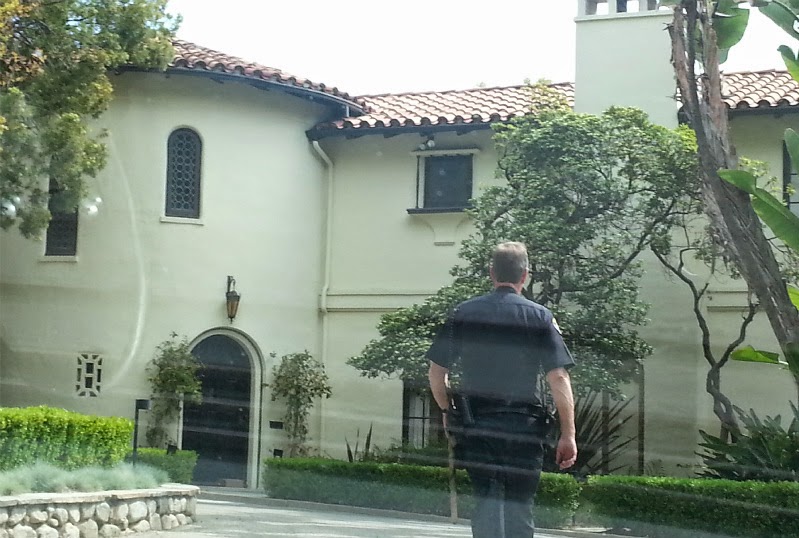 ...a trip back to the Civic Center to transport a prisoner from the Pasadena Jail to the courthouse across the street... 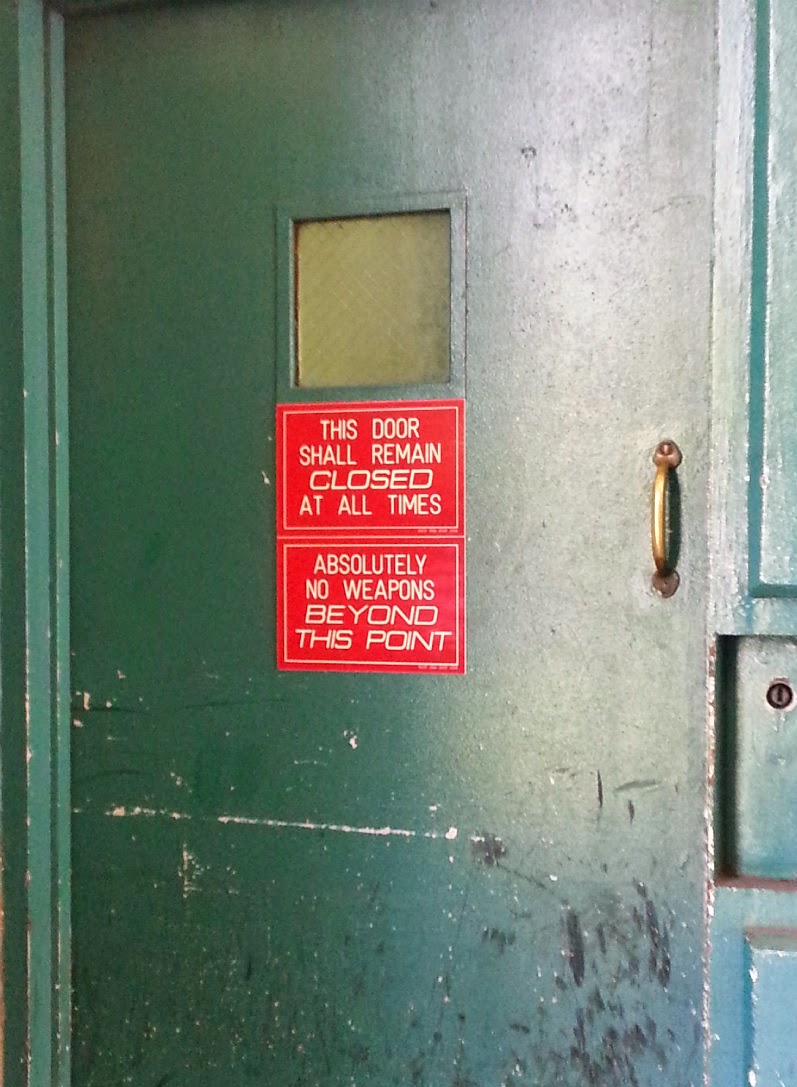 ...a stop at the South Raymond Substation across from Central Park... 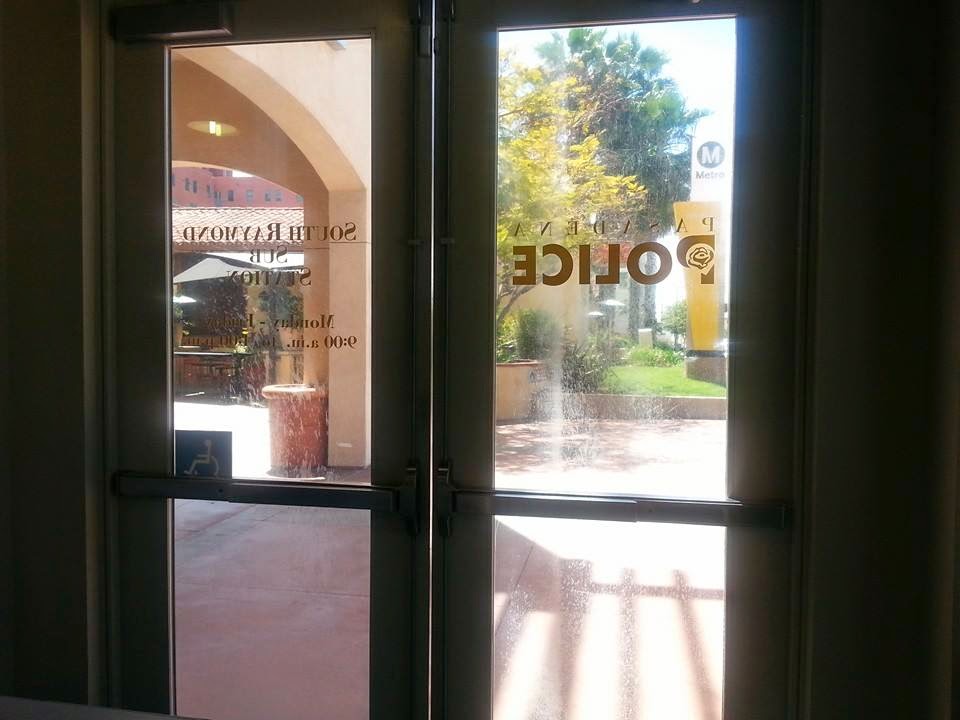 ...and a call about a man trying to kick in the door of his estranged wife's apartment (I redacted the address and phone number below). 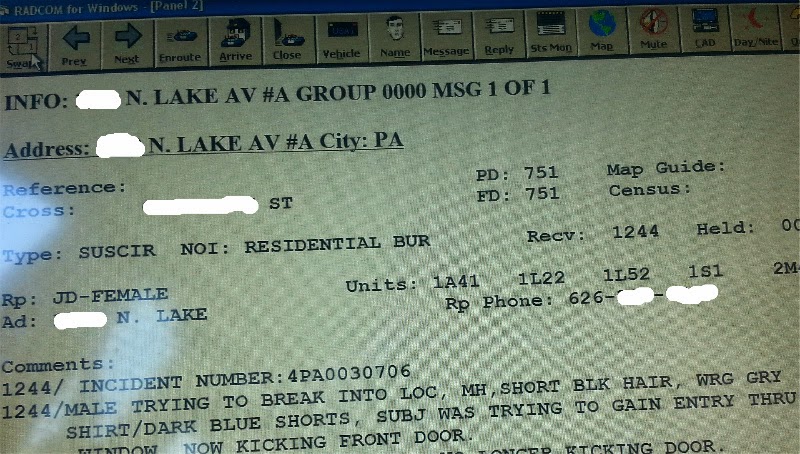 I stayed n the car for that one and watched as my partner walked up to the apartment complex, where another officer had arrived as well. 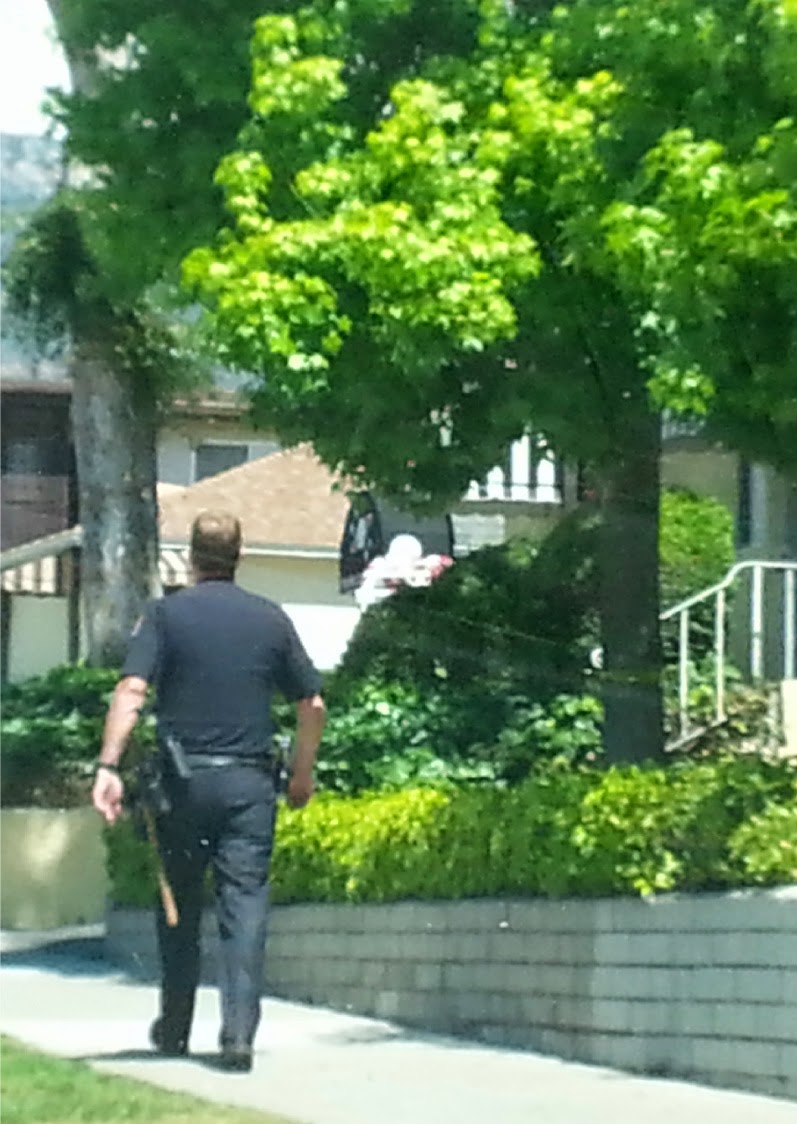 The time passed much more quickly than I anticipated. I really appreciated the opportunity to accompany Ship for the day.

On April 17 I was back at the Police Department for Week 12 of Citizens Police Academy -- the role-playing session.

Two to four of us at a time were selected to play the role of police officers in specific scenarios.

Three young people from the Police Explorer Program were brought in to play the role of suspects in the scenarios. Cpl. Glenn Thompson (left) introduced them and walked us through what to expect generally, without telling us what the specific scenarios would be. 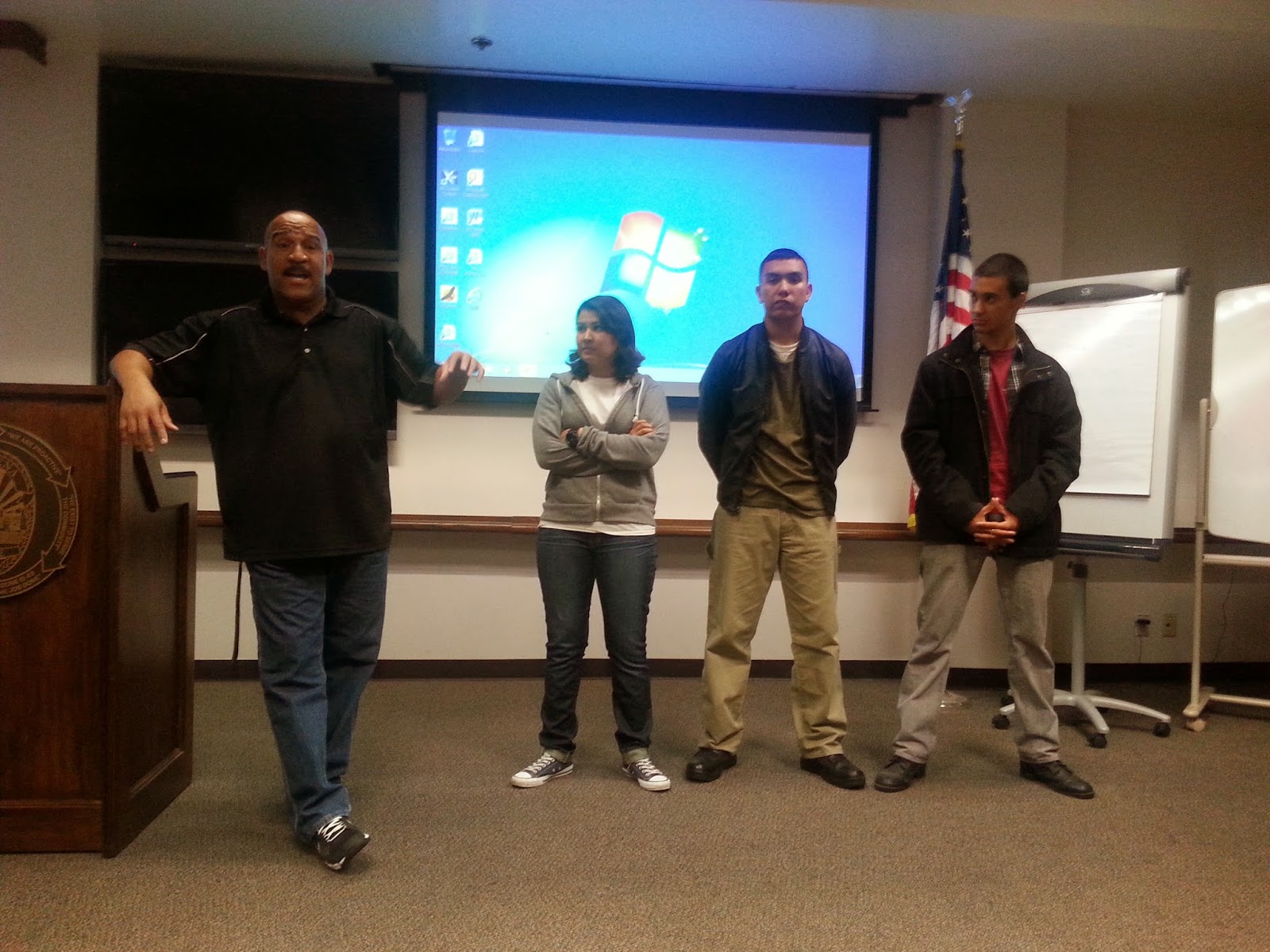 Each class member assigned to role-play was given an orange faux gun.

In this scenario, a wife had physically attacked her husband shortly before a couple of "officers" arrived. 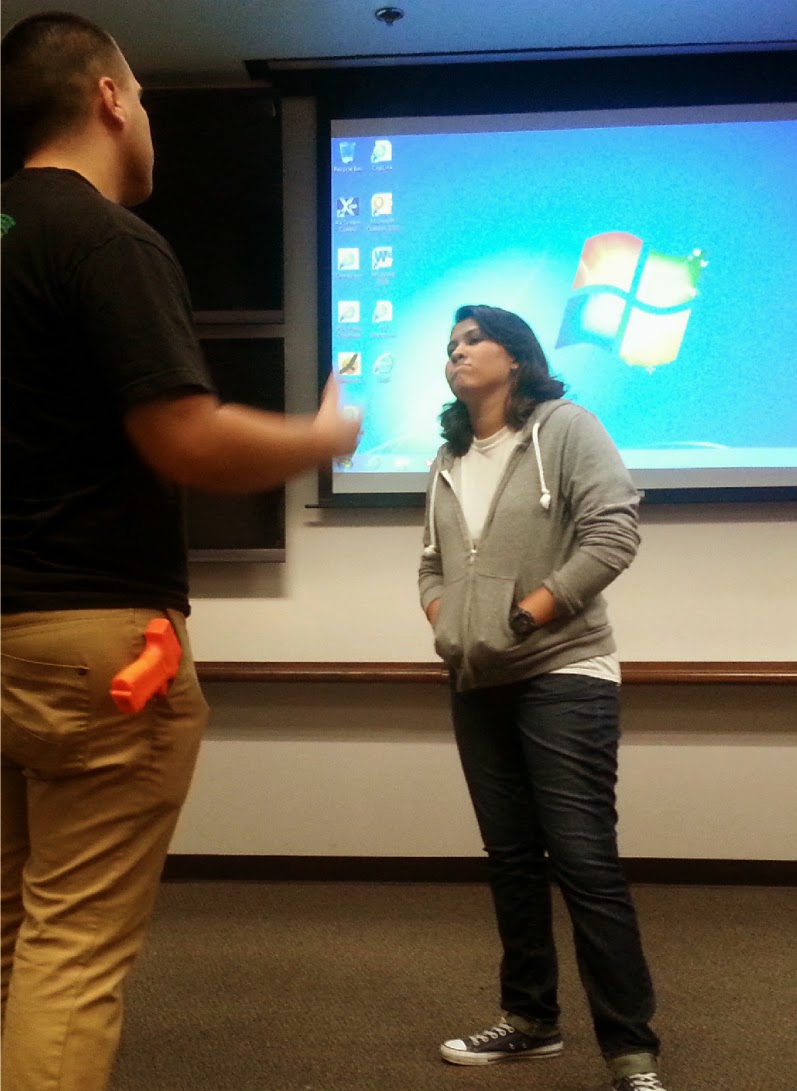 Other scenarios included people gambling in a park (one had a gun, as it turned out) and a vehicle stopped because of suspicious activity.

Retired Pasadena Police Lieutenant Rodney D. Wallace joined us, sitting in the back of the room. It was great to see him! I thought he was just stopping by for old time's sake; little did any of us know he would suddenly assume the role of a suspect who was drunk in public and refusing to obey "officers'" commands while at the same time overtly flirting with them.. 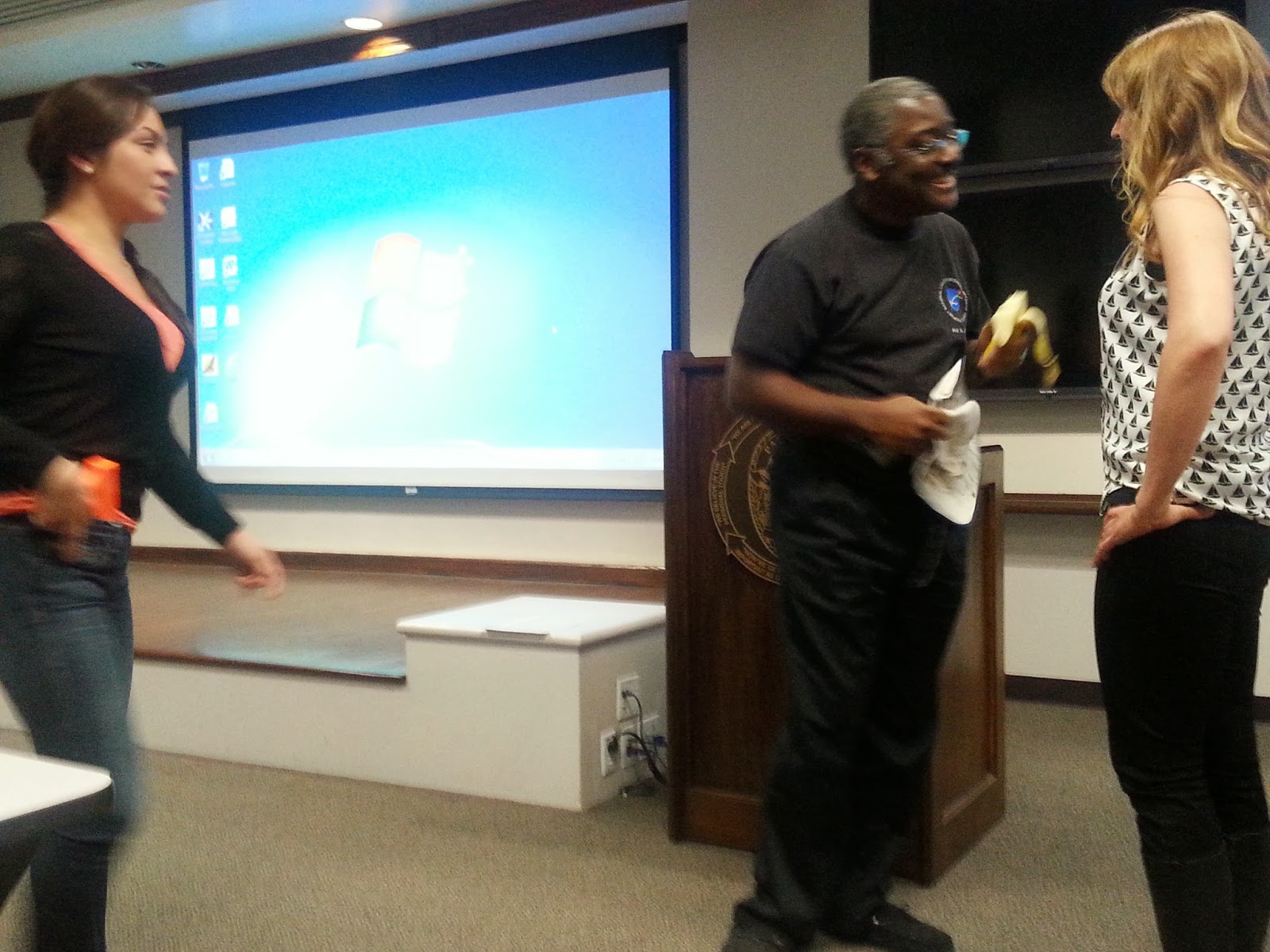 All of these scenarios provided an opportunity for a hands-on learning experience during which we did our best to follow protocols. But at the end of the day, we're not trained police officers. There was constructive criticism about each of our scenarios, followed by sworn police officers demonstrating how each scenario would be handled on their watch.

This evening of role-playing really helped us gain insight into the often intense, daily challenges sworn officers face and the split-second decisions they sometimes have to make in the protection of life and property.

My favorite photo of the night: 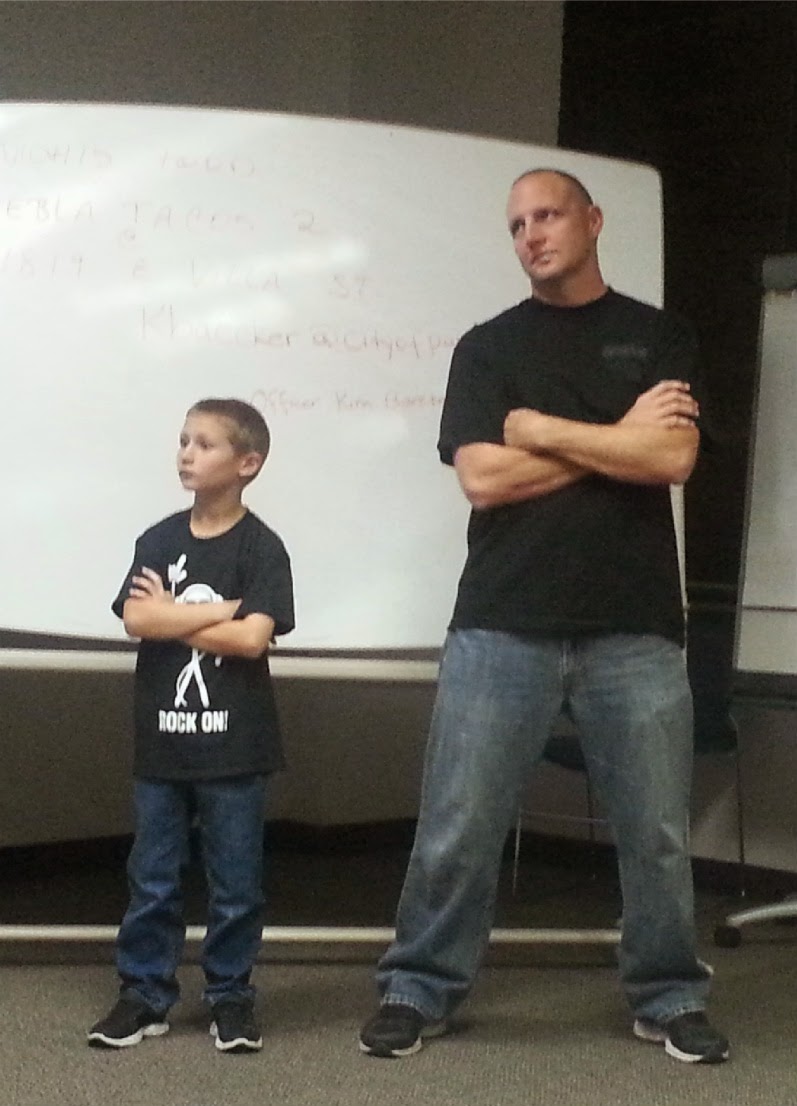 See all of my blog posts labeled "Citizens Police Academy" by clicking here.

On April 24 we graduated! I'll write a separate post about our graduation evening in the next couple of days.