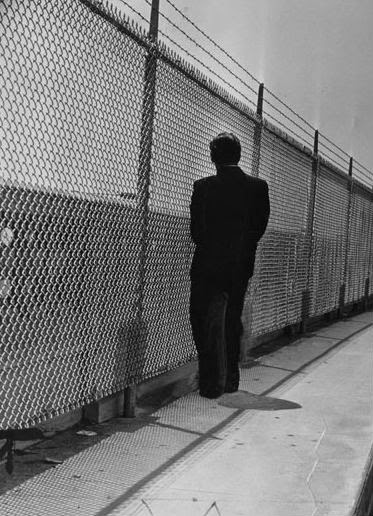 In the Aug. 9, 1937, noir-esque photo above, a man pauses to look through the tall, chain link suicide prevention fence topped with barbed wire on the Colorado Street Bridge. It was the first such barrier ever installed on the bridge. 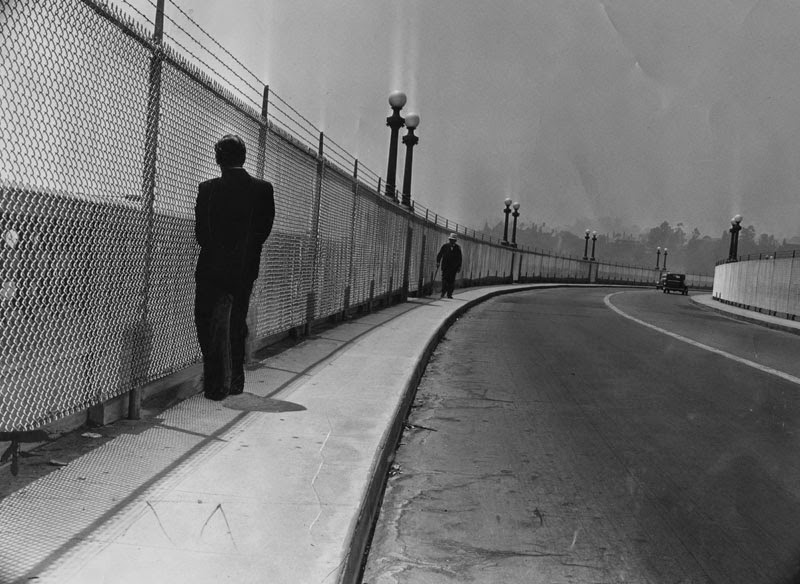 The cutline (photo caption) in the Los Angeles Herald Tribune includes this sentence: "The new fence will not detract from the span's beauty."  It was almost immediately decried as an eyesore.

The bridge, constructed in 1913, stands nearly 150 feet tall, spans nearly 1,500 feet across the Arroyo Seco and has been the site of several suicides over the years, earning it a regrettable nickname.

The first person to leap to his death was in 1915. The predominance of jumpers -- nearly 100-- took the plunge during the Great Depression between 1929 to 1939. Almost all of the jumpers were from Los Angeles.

These photos show the Colorado Street Bridge before the suicide prevention fence was installed. There was only a chest-high balustrade. 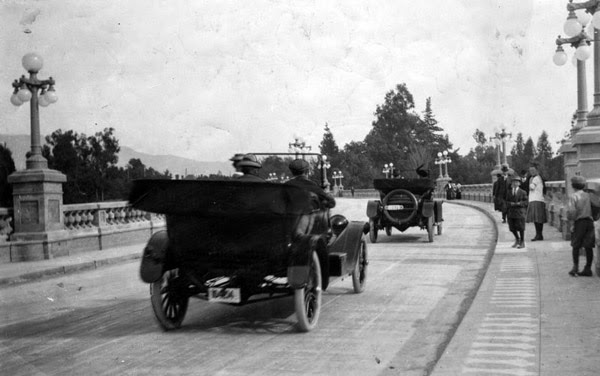 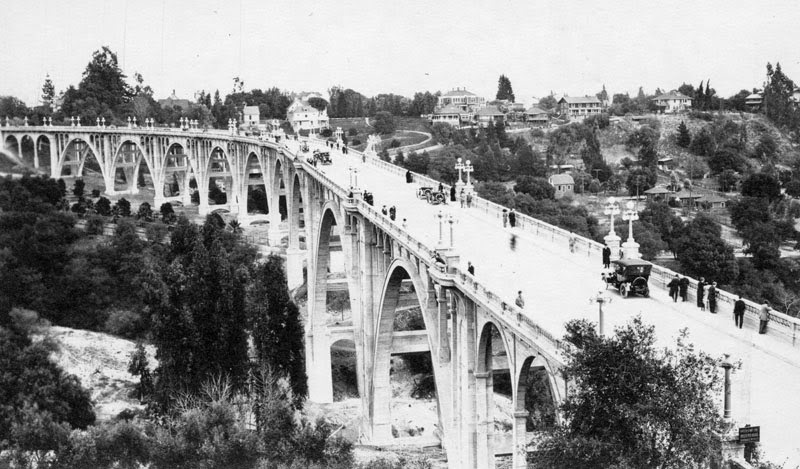 As with all the suicides during the Great Depression, the one just prior to the installation of the ugly fence was a sad and tragic case.

Myrtle Ward and her musician husband lived in the El Sereno district of Los Angeles with their 3-year-old daughter Jeannette. Like so many others, they were out of work and the financial burdens were becoming more crushing with every passing day. Myrtle lost all hope and became despondent.

On the morning of May 1, 1937, 22-year-old Myrtle drove the family car to the east end of the bridge, got out and, holding little Jeannette's hand, went onto the bridge's pedestrian walkway. Myrtle stepped onto a bench in a little alcove at the highest point of the bridge and threw little Jeannette over the side. She then climbed onto the short balustrade and jumped to her death.

Jeannette's fall was broken by a tree branch before she landed on a small spot of soft sand in the Arroyo Seco streambed.

Myrtle died three days later at Huntington Memorial Hospital; Jeannette was hospitalized briefly and was raised by her paternal grandmother.

In 2011 the Pasadena Weekly ran an article about then 77-year-old Jeannette titled "Heavenly Helpers." It included this quote from her:

“God sent his angels down there and saved me.
There was no other explanation. . .It was not my day to die.”

That very first fencing in the top photo was installed shortly after the May 1 incident.

When the Colorado Street Bridge made its second debut in 1993 after a nearly four-year seismic retrofit and historic restoration project, it included a suicide prevention barrier complementary to the bridge's architecture and surroundings that remains to this day. 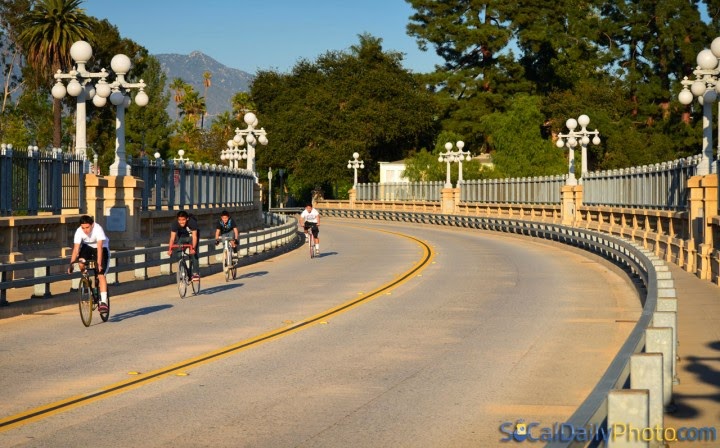 In modern times the number of suicides committed at the bridge averages less than two a year. That's still too many, but it's a much better number than the 10 a year during the Great Depression.

Pasadena police officers and chaplains respond to calls at the bridge a few times a year. Ordinarily they are successful in convincing people not to jump. Many thanks to Los Angeles Public Library, Southern California Daily Photo and Lins Consulting
Posted by Ann Erdman at 6:00 AM