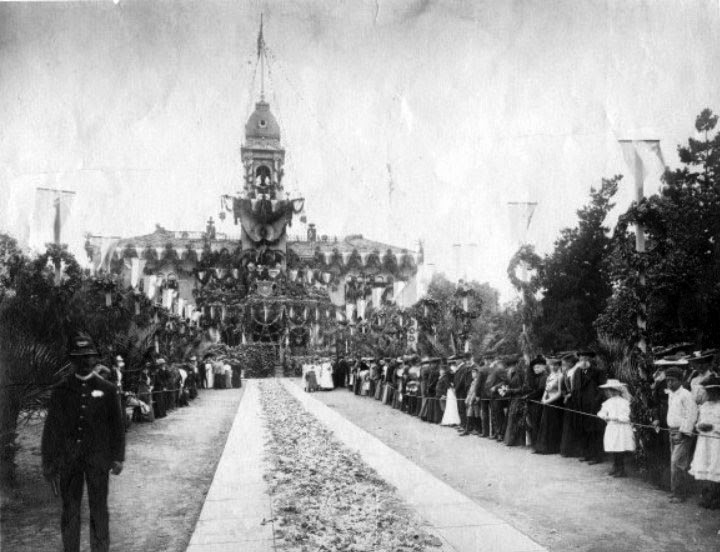 There were three correct guesses out of the 70 or so placed in the suggestion box for Mystery History photo #3 at the Pasadena Museum of History, so Laura Verlaque and I used a very scientific method to choose one.

Geoff Meehan is the winner!

In this May 8, 1903, photo, the community stands ready to welcome President Theodore Roosevelt to Benjamin D. Wilson School*.

Located at the southeast corner of Walnut Street and Marengo Avenue, it was a high school from 1892 to 1903. Here's how it looked without all the festoonery: 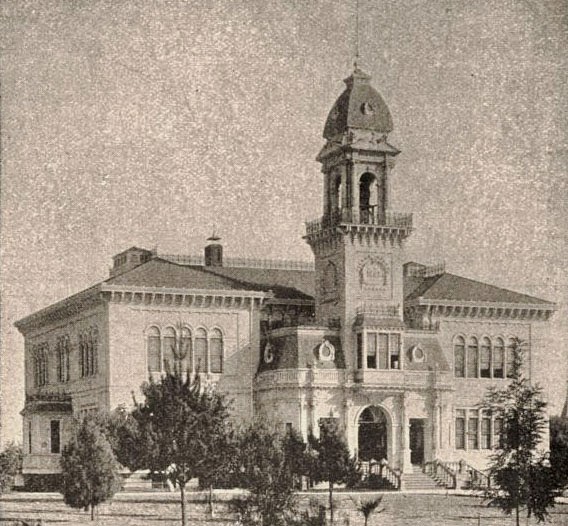 Newspapers throughout the land were reporting on the planning of Roosevelt's Great Western Tour during which he would visit states from Kansas to California, including a walk through Yosemite with John Muir. 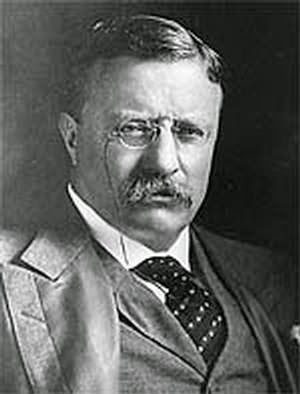 When Pasadena community leaders learned of the upcoming tour, they sent a specially made key to the city along with an invitation to visit this community during his travels.

President Roosevelt today received a valuable invitation from the citizens of Pasadena, Cal. What its exact value is has not been made known, but it is worth a good deal, for it is in gold. The invitation, which was handed to the President today by Representative McLachlan of California, asks Mr. Roosevelt to visit Pasadena on his coming trip to the West. It is in the form of a key of solid gold, and around the stem of the key is a splendidly engraved crown.

The key is emblematic of the key of Pasadena, and the crown is emblematic of the Indian name for Pasadena, "The crown of the valley." Pasadena is located at the head of the San Gabriel Valley. The invitation is extended by the Mayor and business officials of the town. The key is four inches long and is a good representation of the mammoth keys of the olden days. It is attached to a small piece of native wood that lies in the bottom of a specially made box. The box is of orange wood, with hinges of gold, and gold trimmings at the corners. A gold plate in the centre is inscribed as follows:

"Presented to Theodore Roosevelt, President of the United States, by resolution of the citizens of Pasadena, Cal., Jan. 6, 1903."

On the inside of the lid of the box is the following inscription:

"Pasadena. Greetings to our President."

Then follows a formal invitation for a visit, signed by W.A. Heiss of the City Council, and members of the trade organizations of the city.

Most of the invitations received by the President have met with the reply that the matter would be taken under consideration. The President, however, was so much pleased with this invitation that he directed Secretary Loeb to arrange for a stop in Pasadena in May.

On the way to Benjamin D. Wilson School, the president's coach came down Marengo Avenue, which was decorated with a huge, elaborate arch of lilies and tall wooden posts with palm fronds and wreaths on them. 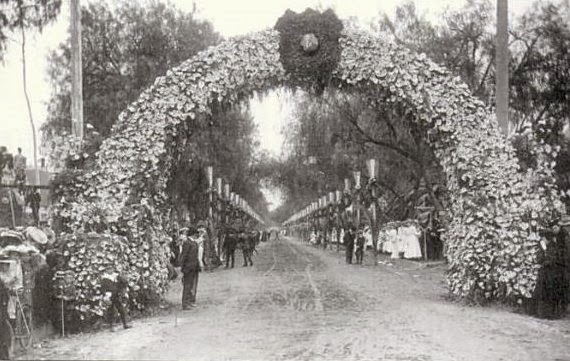 Then, when he arrived at Wilson School, a rose-strewn walkway had been laid down for him. 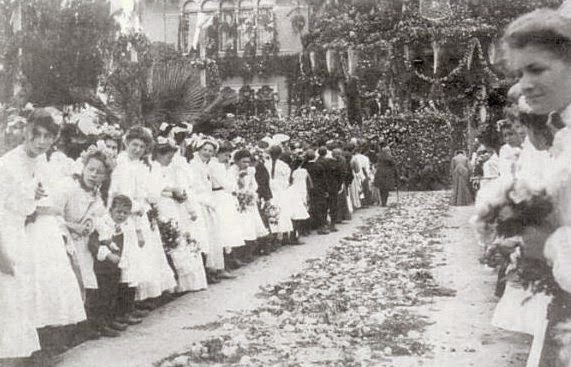 And here's the man himself, giving his speech, no doubt saying "Bully" to this taxidermied grizzly bear! 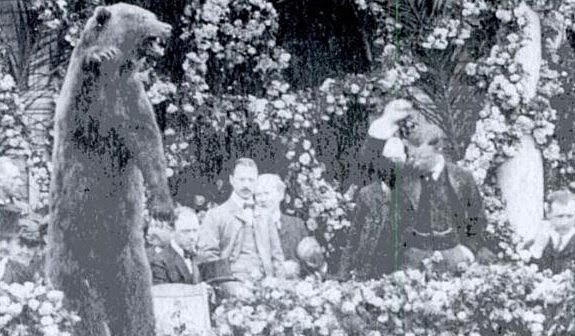 You can read his speech here.

After the speech, he went to South Pasadena for a visit with former first lady Lucretia Garfield, widow of President James Garfield, and lunched at the Hotel Raymond.

Roosevelt was a passionate conservationist. While in Pasadena, he was taken to the Arroyo Seco  where he famously declared his support to Mayor William H. Vedder for the movement to keep it as a natural park: "Oh, Mr. Mayor, don't let them spoil that! Just keep it as it is."

That was just the momentum that was needed, and within eight years the City of Pasadena began acquiring acreage in the Arroyo Seco.

You know I can't miss the opportunity to show you Mayor Vedder from the Hall of Mayors, right? 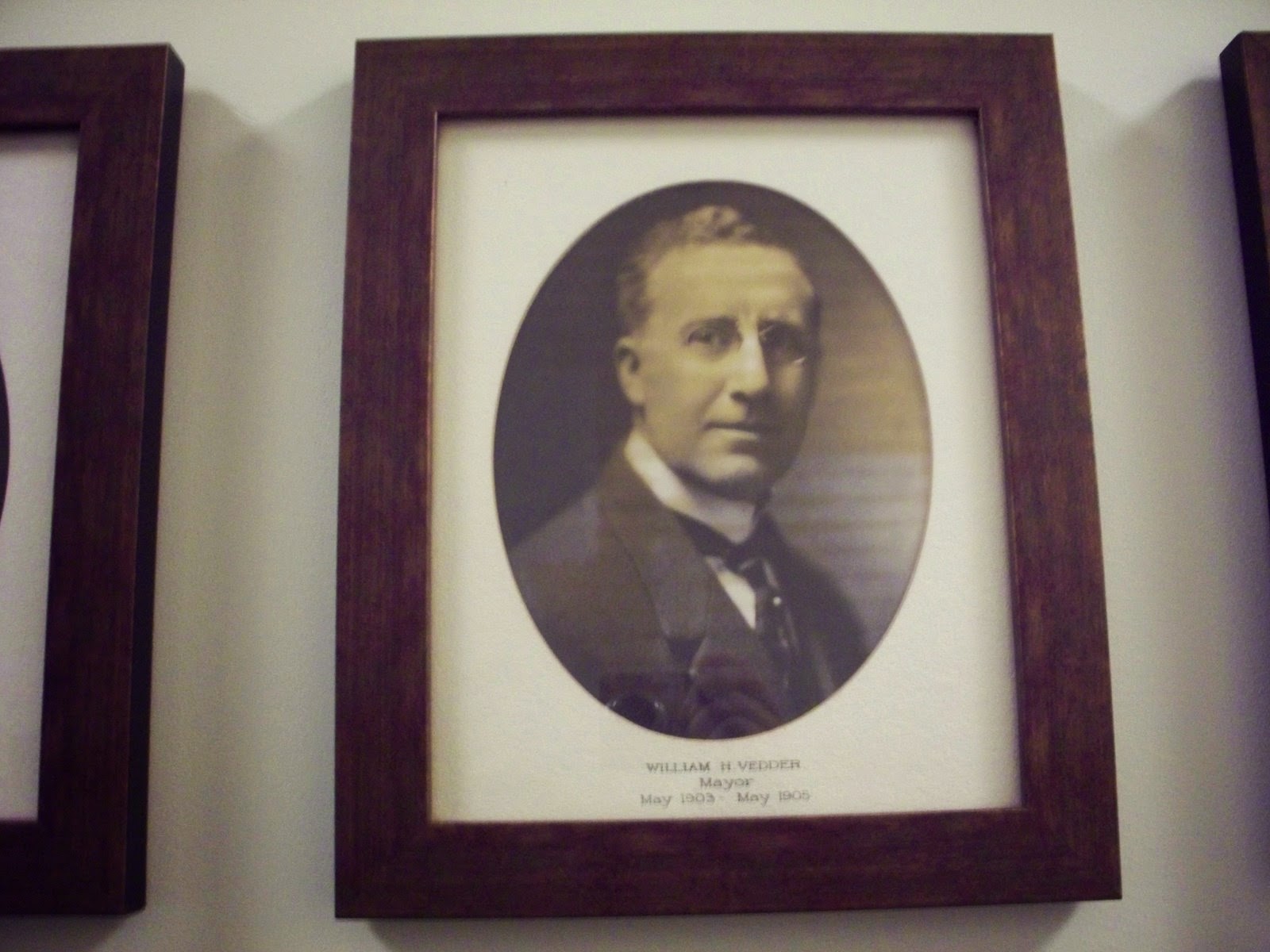 My Mystery History exhibition at the Pasadena Museum of History has been open since January and will close on March 29. If you haven't seen it yet, please come by!

On Tuesday, March 31, we'll be back to Mystery History business as usual on the Ann Erdman blog!


Many thanks to the Pasadena Museum of History, Teaching American History, Pasadena Public Library and yours truly.

*Benjamin Davis Wilson, for whom this school was named, was more popularly known as Don Benito. He was a major landowner in the greater Los Angeles area, including Pasadena, where he lived at his vast Lake Vineyard property (Lake Avenue was originally named Lake Vineyard Street). He later became mayor of Los Angeles and was the grandfather of General George S. Patton Jr. Mt. Wilson, Wilson Avenue and Don Benito School were named in his honor. The current Wilson Middle School was named for President Woodrow Wilson.