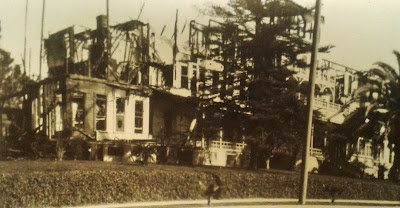 Dale wins with his 1:15 p.m. Tuesday guess "This is the La Pintoresca/Painter/Pasadena Hotel after the fire which destroyed it in 1912."
In the Jan. 2, 1913, photo above, the La Pintoresca Hotel lies in ruins at the northeast corner of Fair Oaks Avenue and Washington Boulevard after being destroyed by a fire.

When it was first built it was called the Painter Hotel. 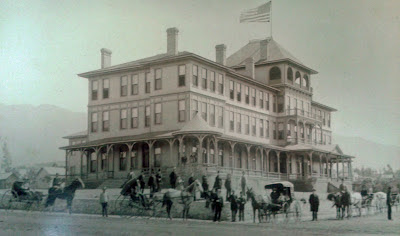 Check out the trolley cars in the lower left and right corners of this photo: 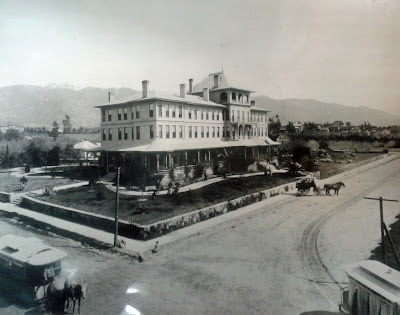 After significant landscaping was completed, the name was changed to La Pintoresca because of the picturesque setting: 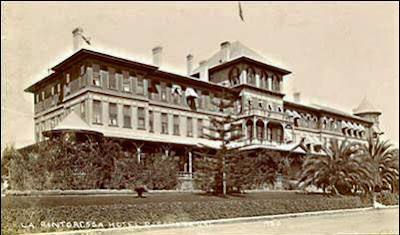 I did a Mystery History post about the hotel's gardeners in 2010, which you can see here.
Over the years there were substantial additions to La Pintoresca Hotel, making it one of the largest hotels in Pasadena. 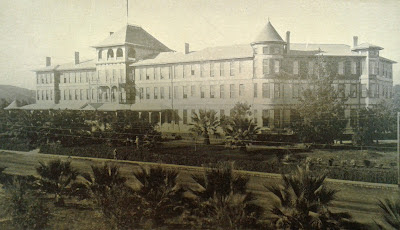 It was sold in 1905 and then destroyed by fire seven years later.
Here's an excerpt from my favorite reference book, "Pasadena: Historical and Personal" by John Windell Wood:

"The Painter -- or as it became, La Pintoresca, i.e. 'the picturesque' -- was built by J.H. Painter and his two sons, Alonzo and M.D., in 1887. J.H. Painter had been the partner of B.F. Ball in the Painter & Ball Tract and had amassed much money thereby. A fine and sightly spot in North Pasadena was selected, and upon it a fine hotel was built and opened for tourist trade in 1888, under the management of M.D. Painter. The investment cost about $100,000, and prospered for several years, but it was in 1905 sold to others and was destroyed by fire December 31st, 1912. The grounds it occupied were purchased by the city in 1914 and now comprise one of the city's handsomest parks, small it is true, but like the name it bears, picturesque and beautiful and much appreciated by the residents of North Pasadena."


Many thanks to Pasadena Museum of History.
Posted by Ann Erdman at 12:01 AM