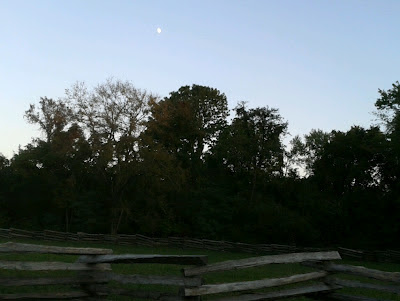 Yesterday, after a full day of family genealogy research at the Bentonville, Arkansas, Public Library and the Benton County Historical Society, I traveled about half an hour to Pea Ridge Battlefield National Park.

As you can see in the photo above, the moon was on the rise when I arrived.

The interpretive center was closed for the day but the park was open until 9 p.m. so I took the driving tour, taking advantage of the audio narration via my cell phone. 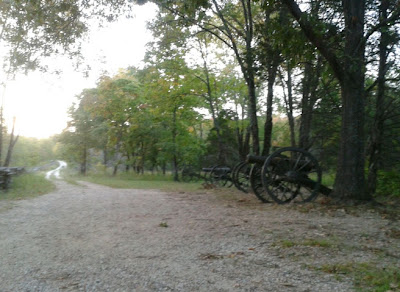 I grew up listening to stories about the Civil War from my grandparents on both sides -- tales of their respective fathers, grandfathers, uncles, great uncles, you name it.

Pea Ridge was the most important Civil War battle west of the Mississippi River. Over the course of two days in March 1862, more than 26,000 soldiers fought it out in the battle that would decide Missouri's fate. When the smoke cleared, more than 1,000 soldiers were dead and nearly 1,800 were wounded. Learn more about this important military action here.

My great-grand uncle Dempsey Powell Dickson (1843-1862), a Confederate soldier, was killed in action during the Battle of Elkhorn Tavern here.

I shot this photo of a portion of the huge Pea Ridge battlefield (note the cannons) when the near-evening sky cast a blue glow on everything: 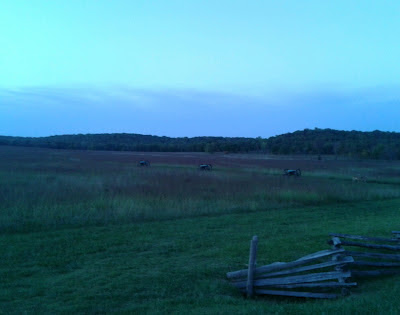 I ever so slowly approached this buck that stopped and stared at my car before it bounded over the fence. 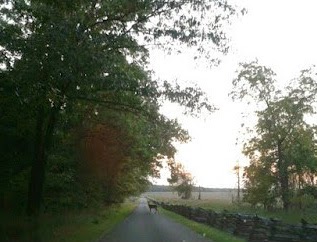 The moon had risen before the sun set on my way out of the park. 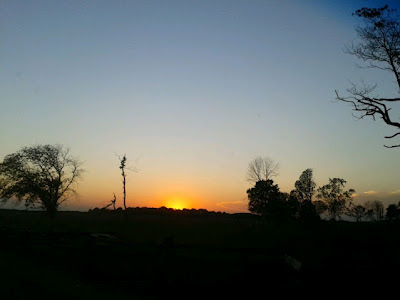 I'm going to try to find time to visit nearby Prairie Grove Battlefield State Park before I return home.

One of the family stories I grew up with was that my great-great-great grandfather Andrew Jackson (no relation to the president), a captain in the Confederate Army, was captured during the Battle of Prairie Grove, taken as a prisoner of war to a Union prison camp in Springfield, Illinois, where he was transferred to the prison at Ft. McHenry in Baltimore. He escaped from Ft. McHenry somehow and walked home from Baltimore, Maryland, to his hometown of Cane Hill, Arkansas, where he lived a long and productive life. 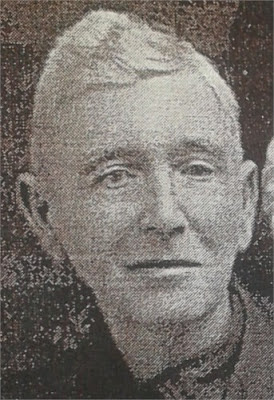 I would really like to stand where he stood at Prairie Grove.

I'm grateful that many of the Civil War battlefields have been conserved for the sake of our national heritage. It would be a shame for Walmarts to be built on any of them!
Posted by Ann Erdman at 7:34 PM