...With Waylon and Willie and the Boys

Yesterday was a perfect vacation day here in the Texas hill country.

My sister Charlou and I took a road trip for several hours with stops along the way.

Our first stop was Sisterdale. We stopped at Sister Creek Vineyards, which seemed fitting for obvious reasons!

This is the winery and tasting room. Really. But don't let the exterior looks fool you. 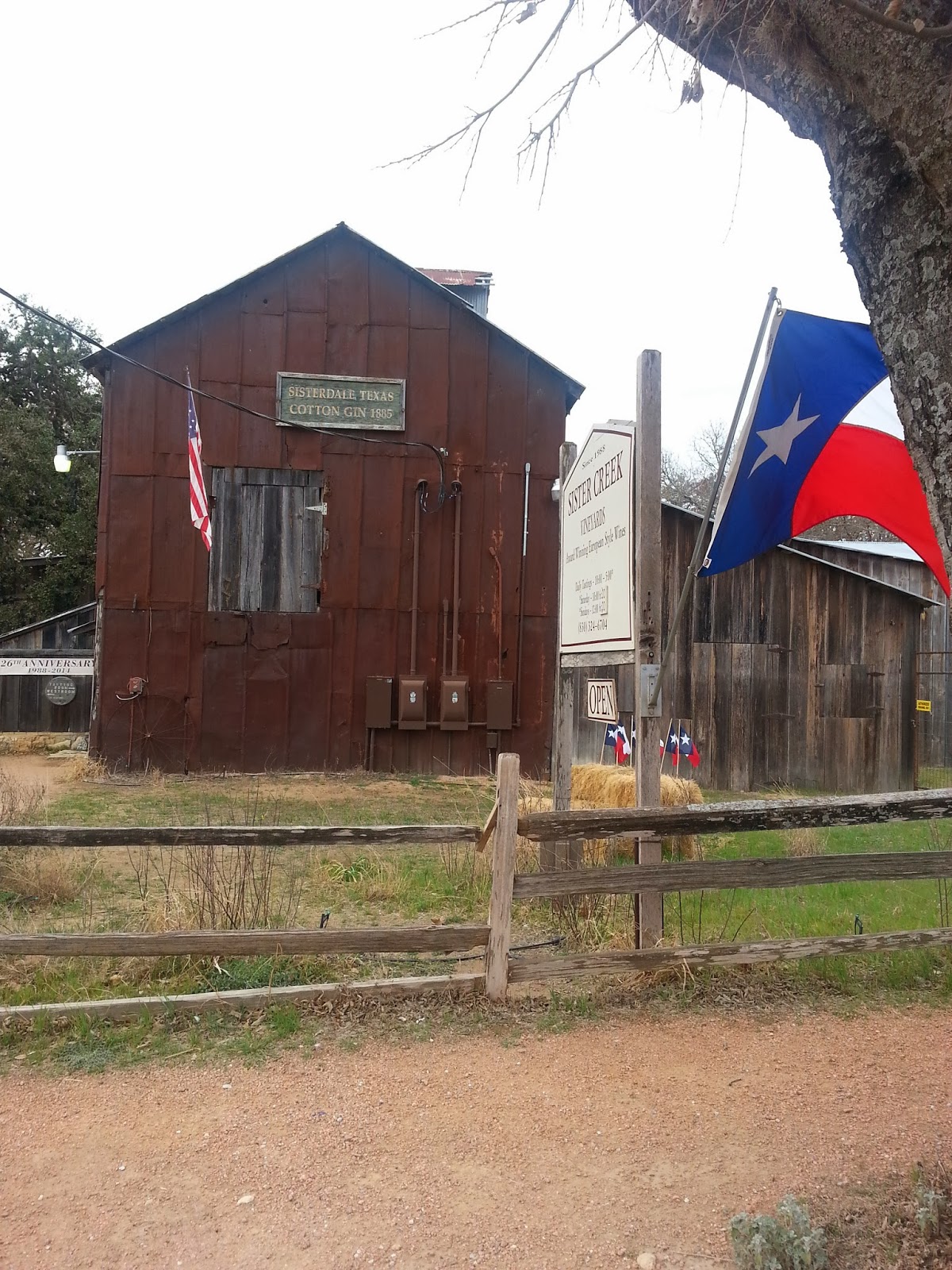 Their wines have won awards throughout the world. 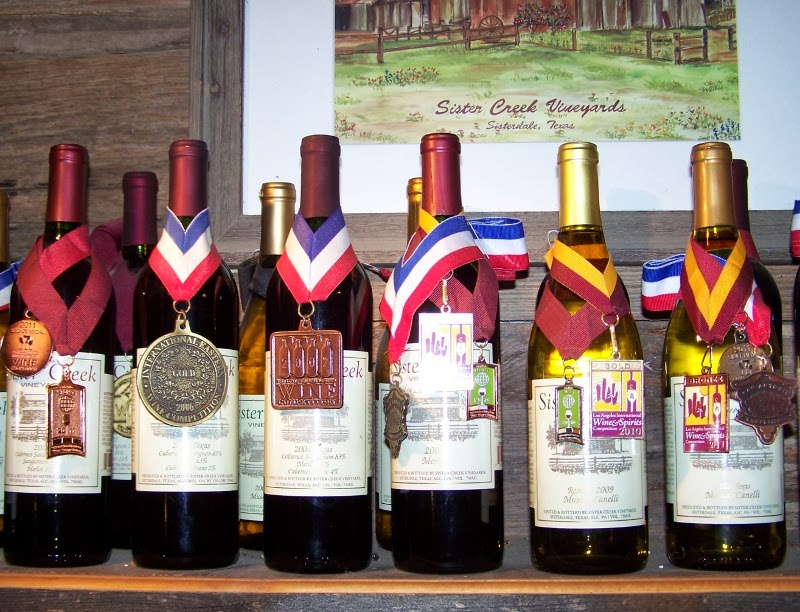 Charlou among the wine barrels: 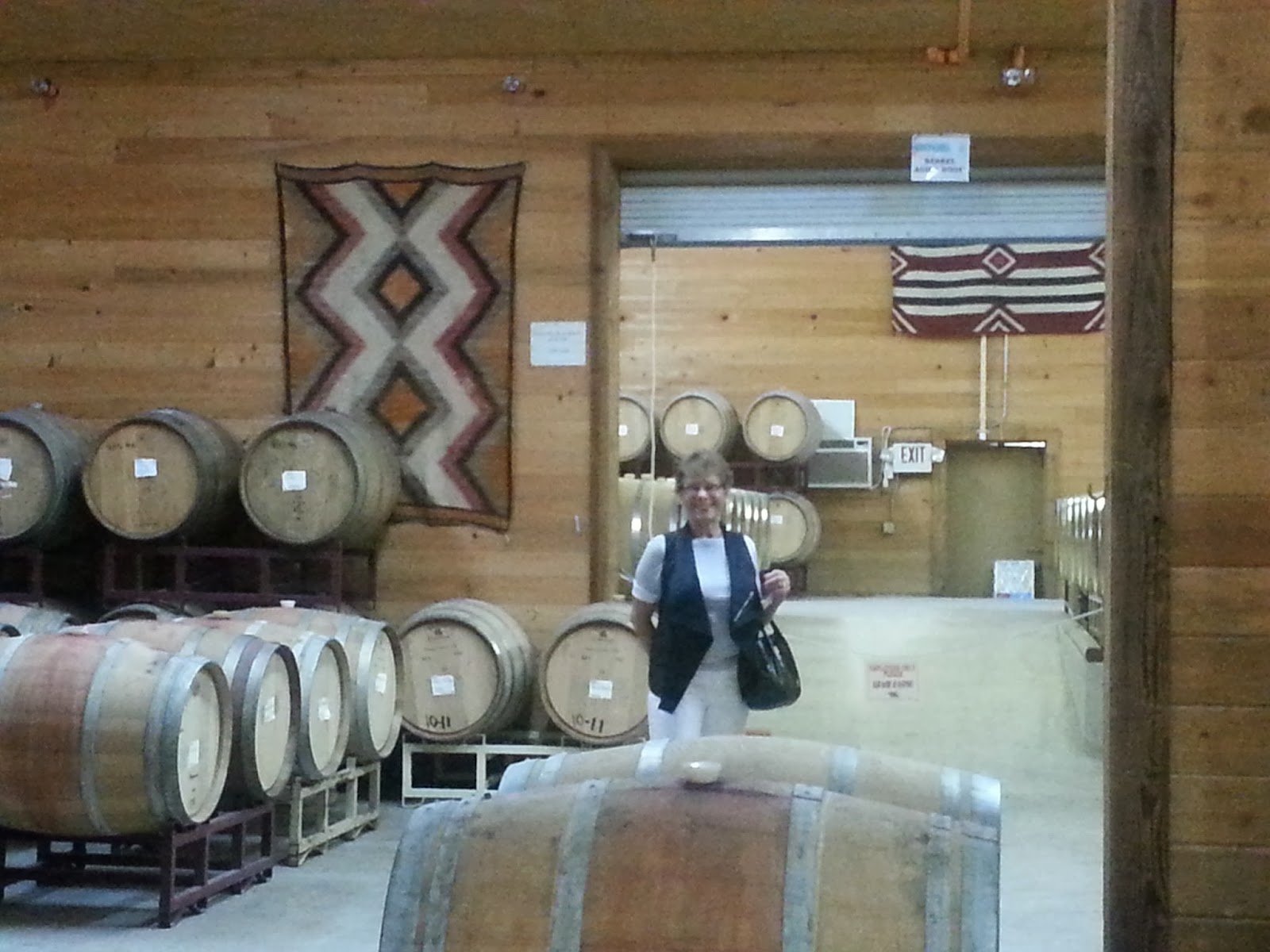 After some tasting and visiting with the friendly folks there, we bought a bottle and hit the road again.

Our next stop was Luckenbach, made famous in the iconic country song. 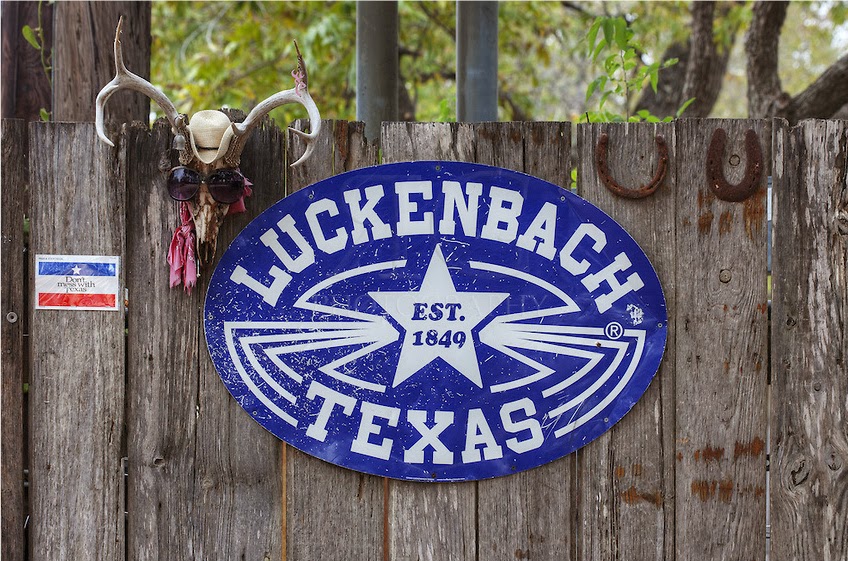 Much of the Texas hill country was settled by German immigrants and that influence is seen and felt in the names of towns such as Luckenbach.

The U.S. Post Office there was in operation for 121 years before the federal government closed it in 1971. Now it's a general store and bar. 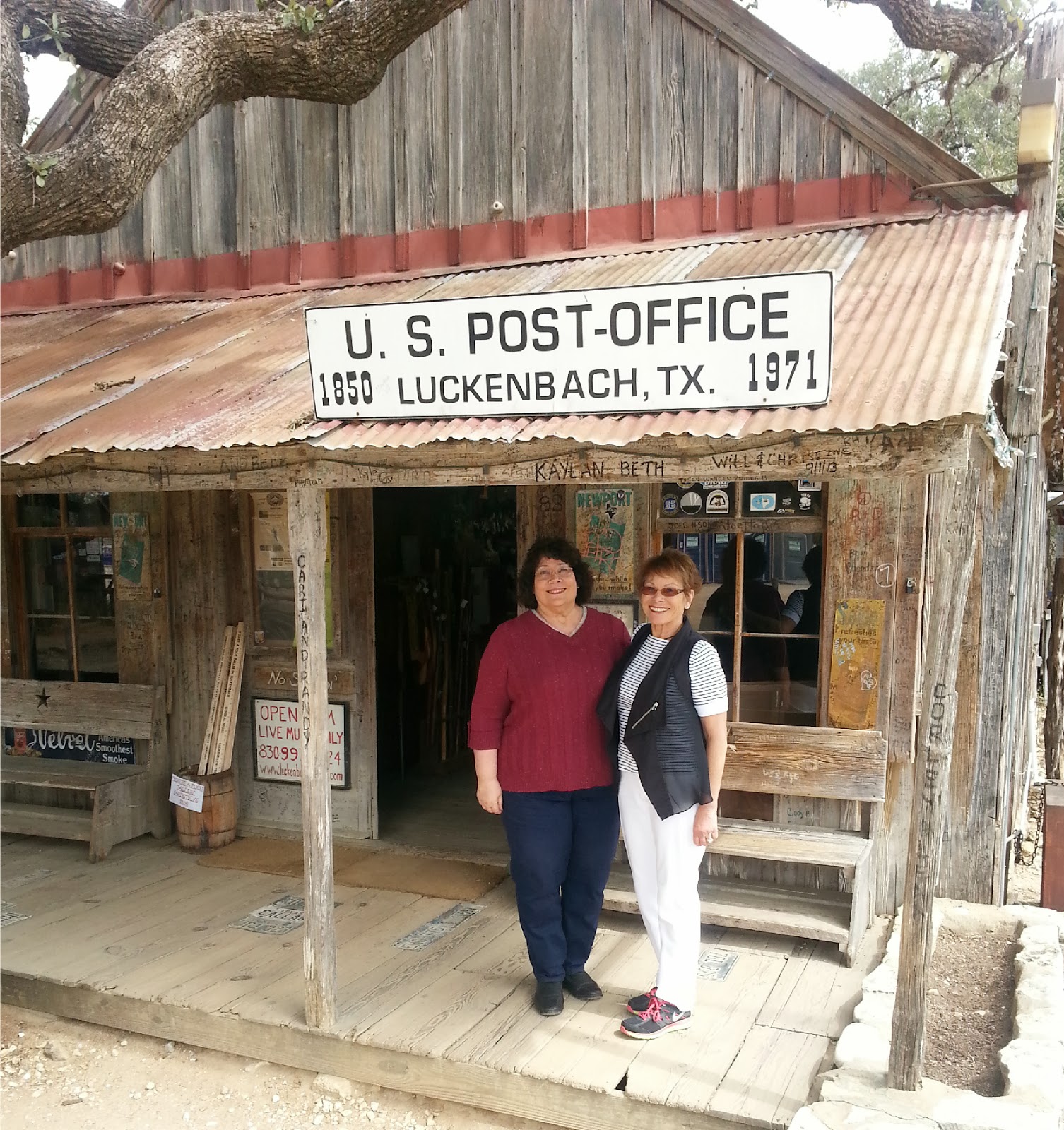 In the bar we had root beer; the real beer of choice in these parts is Shiner, brewed right here in Texas hill country.

The bartender serenaded us with some pickin' and singin'. 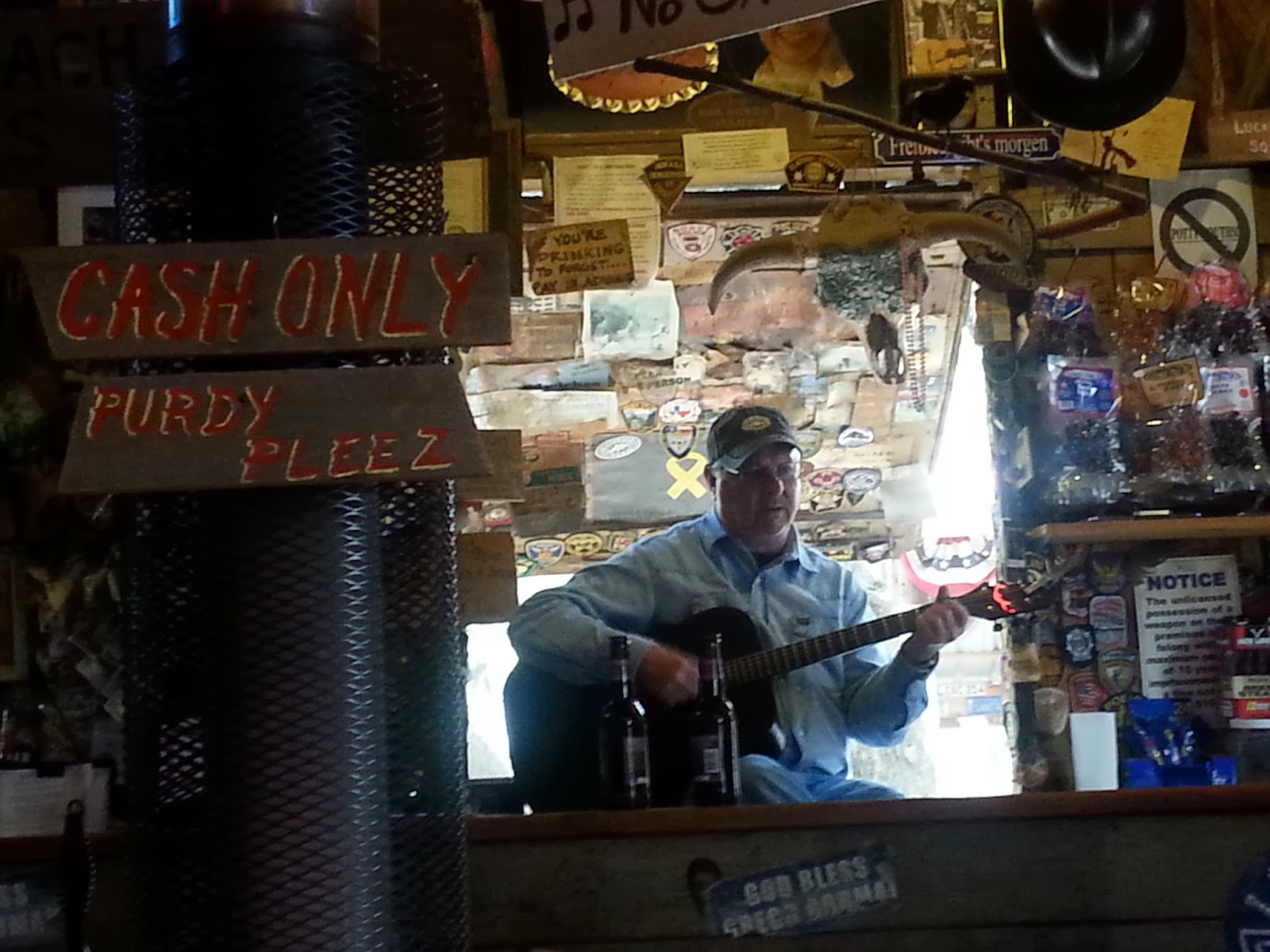 So did this gentleman: 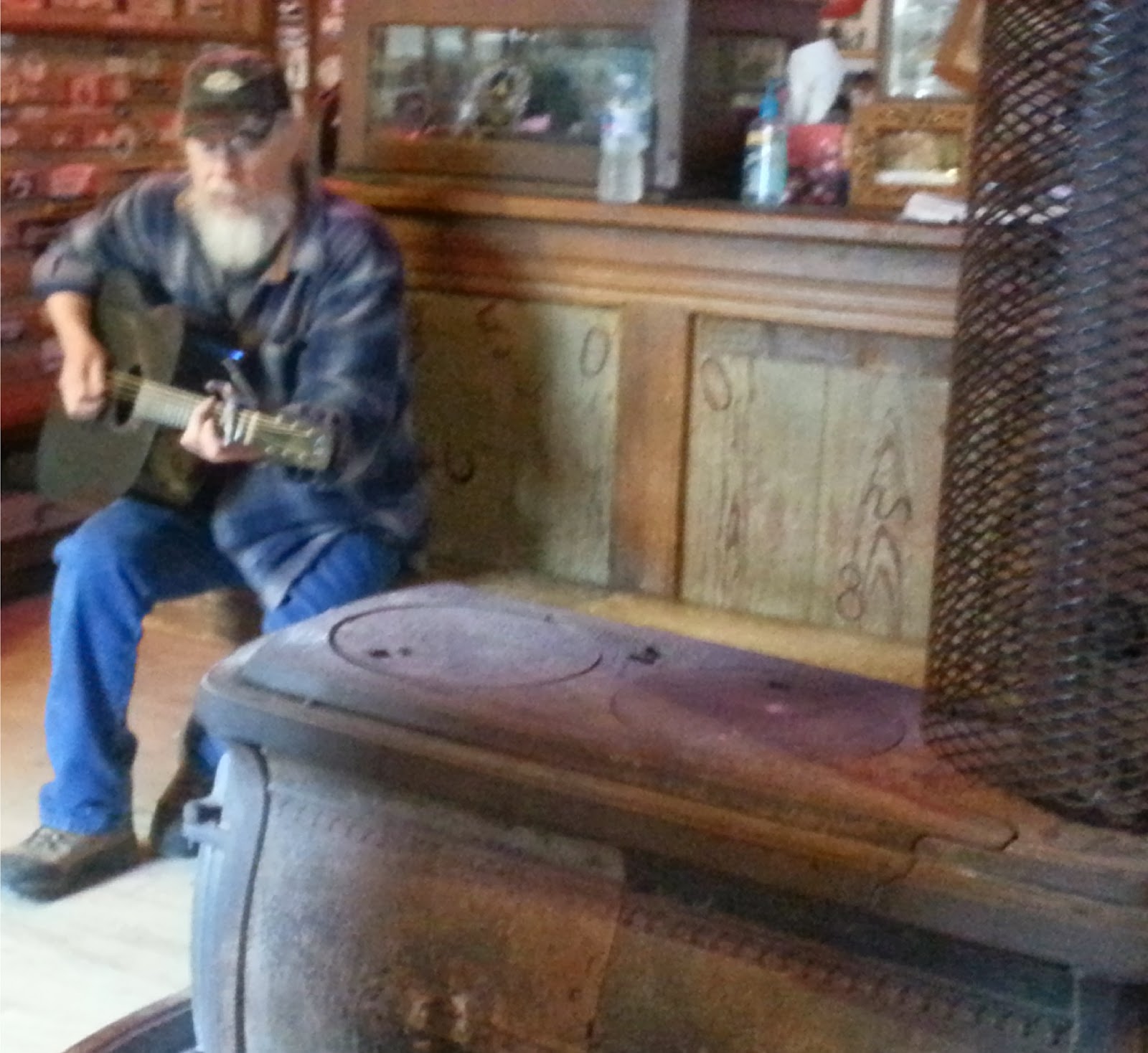 The wood-burning stove serves two purposes: to take the chill out of the air and heat deer sausages. 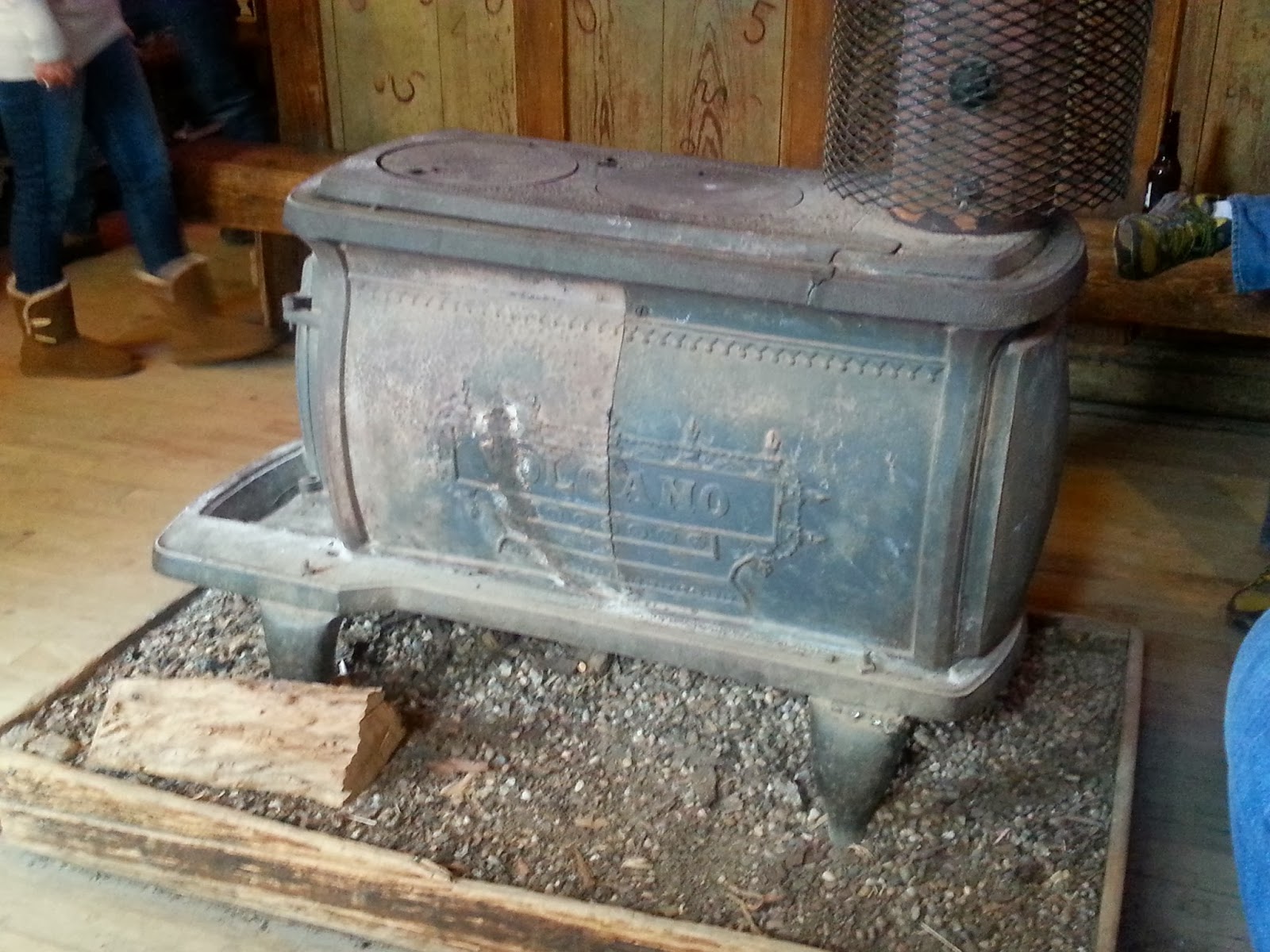 We had seen on the Luckenbach website that local pickers and singers play outdoors every day so we stuck around for a few minutes until this local musician arrived. I regret that I don't recall his name.

He has a low, mournful voice and plays the guitar beautifully. He started with a slower version of Kris Kristofferson's "Help Me Make It Through the Night" and went on from there. It was really nice. 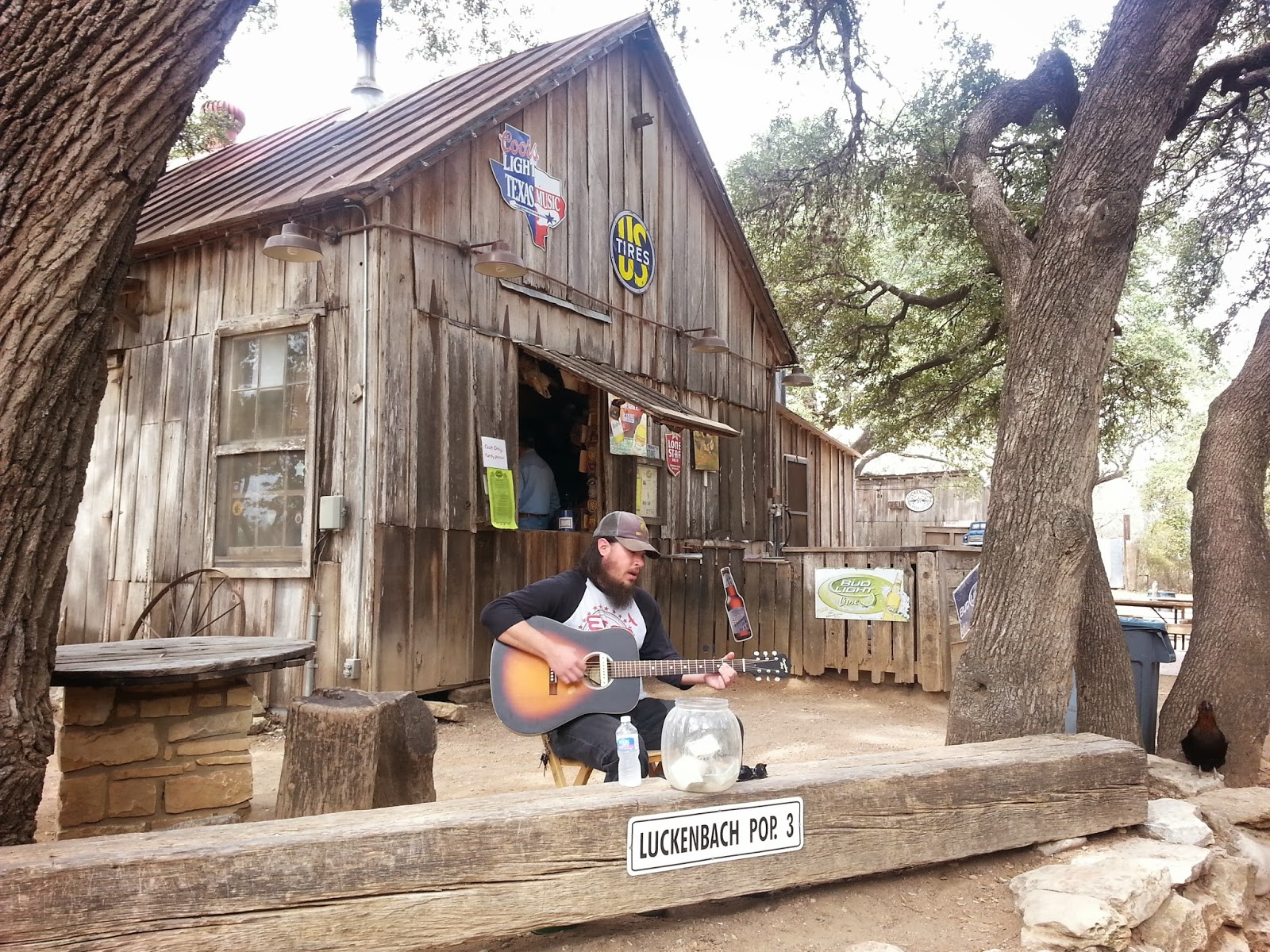 There was plenty of other local color at Luckenbach yesterday: 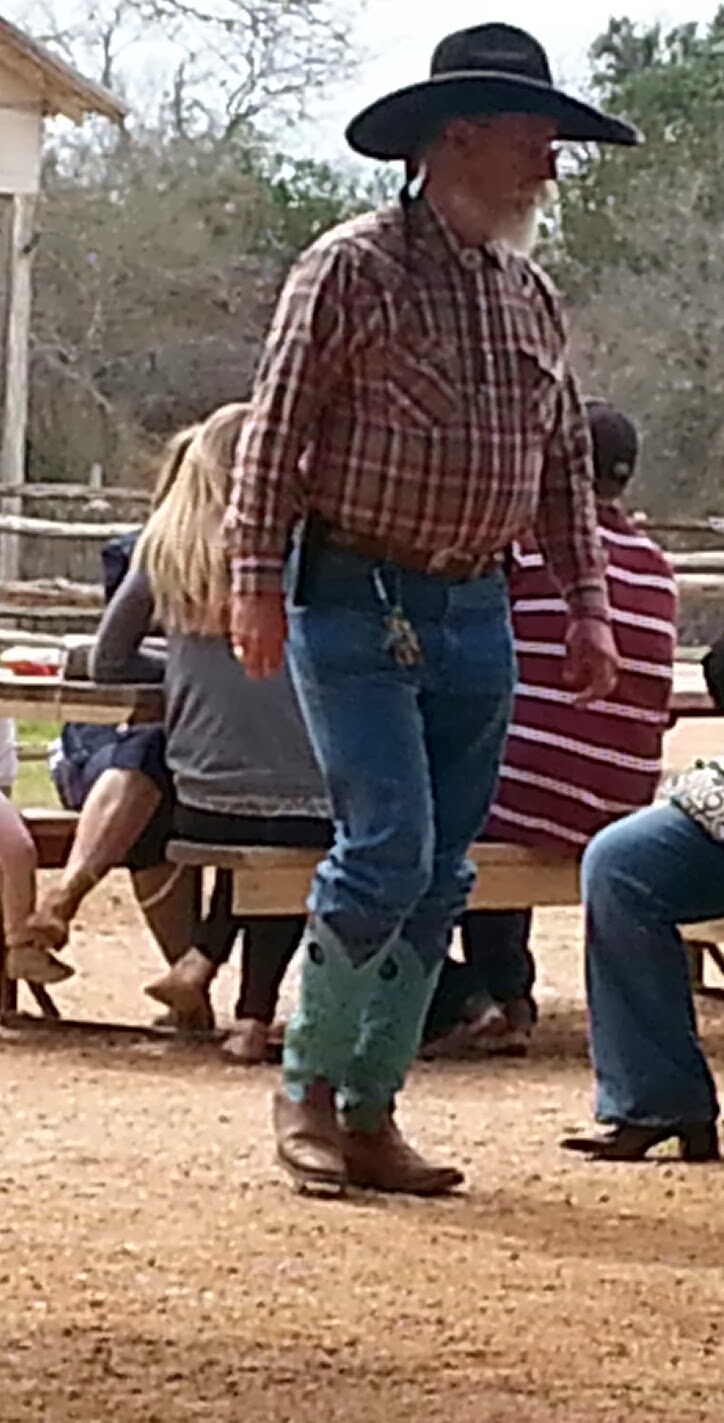 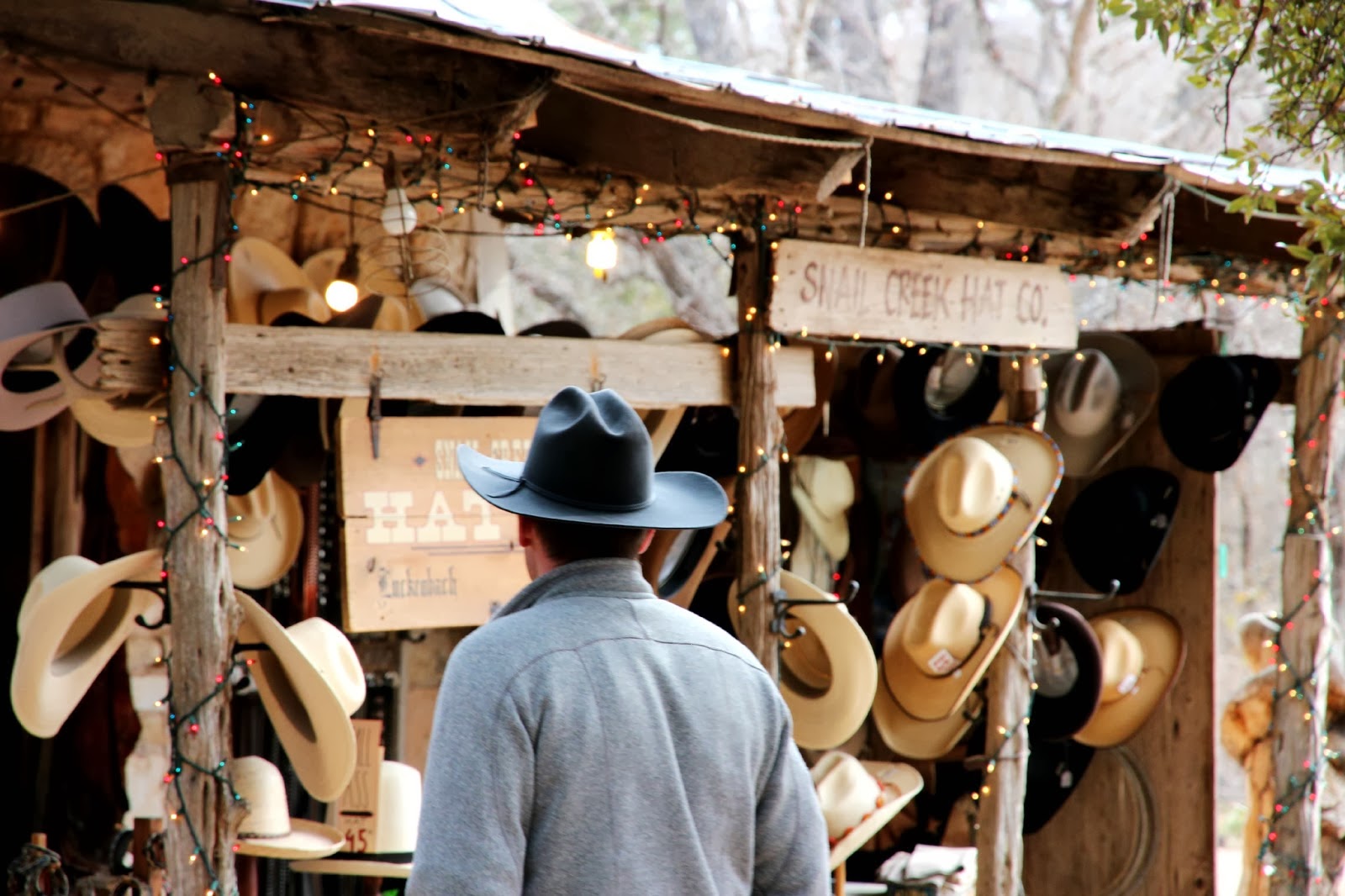 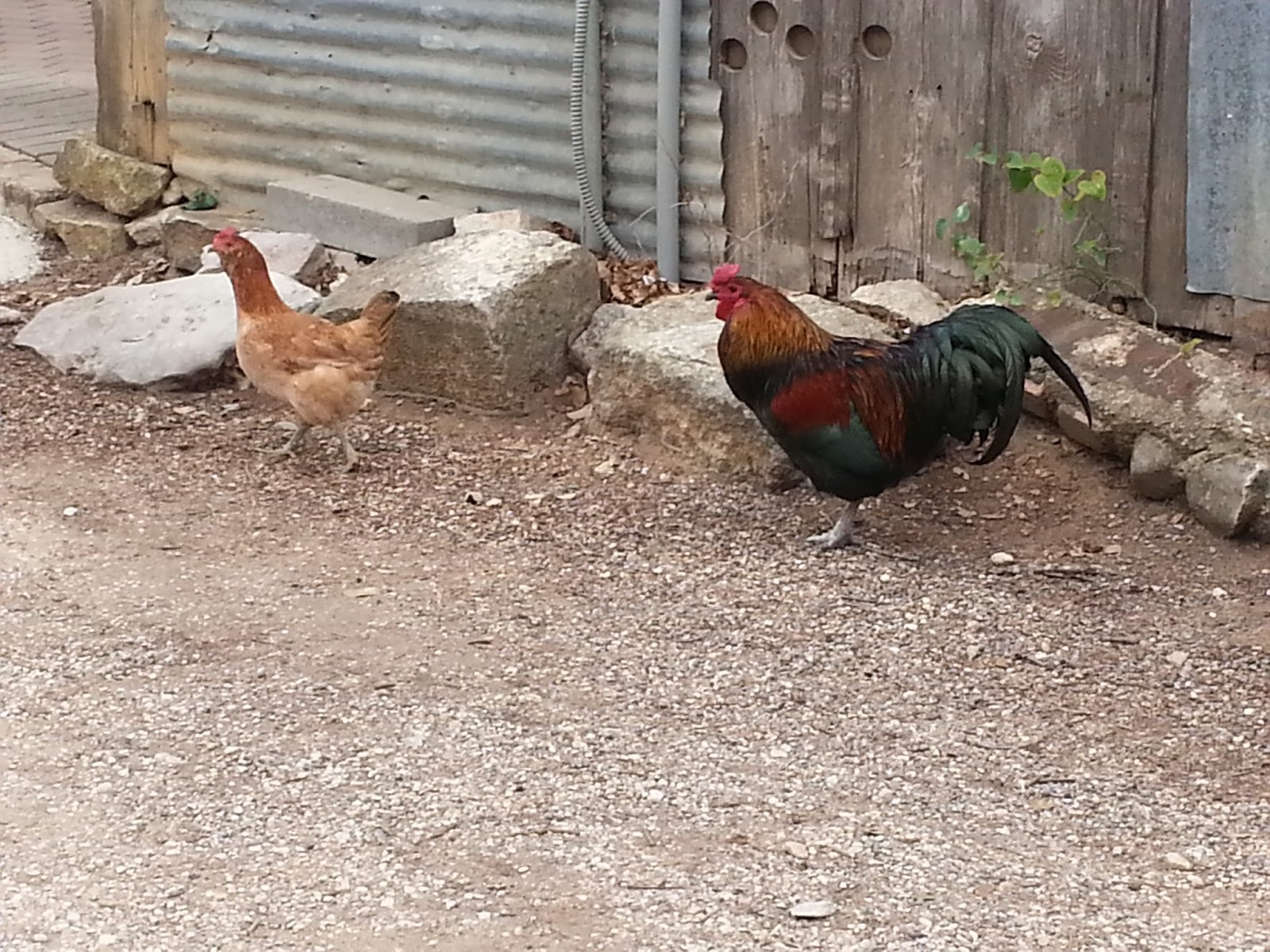 Then it was on to historic Fredericksburg, which also has a strong German history and where those roots are very strong to this day. 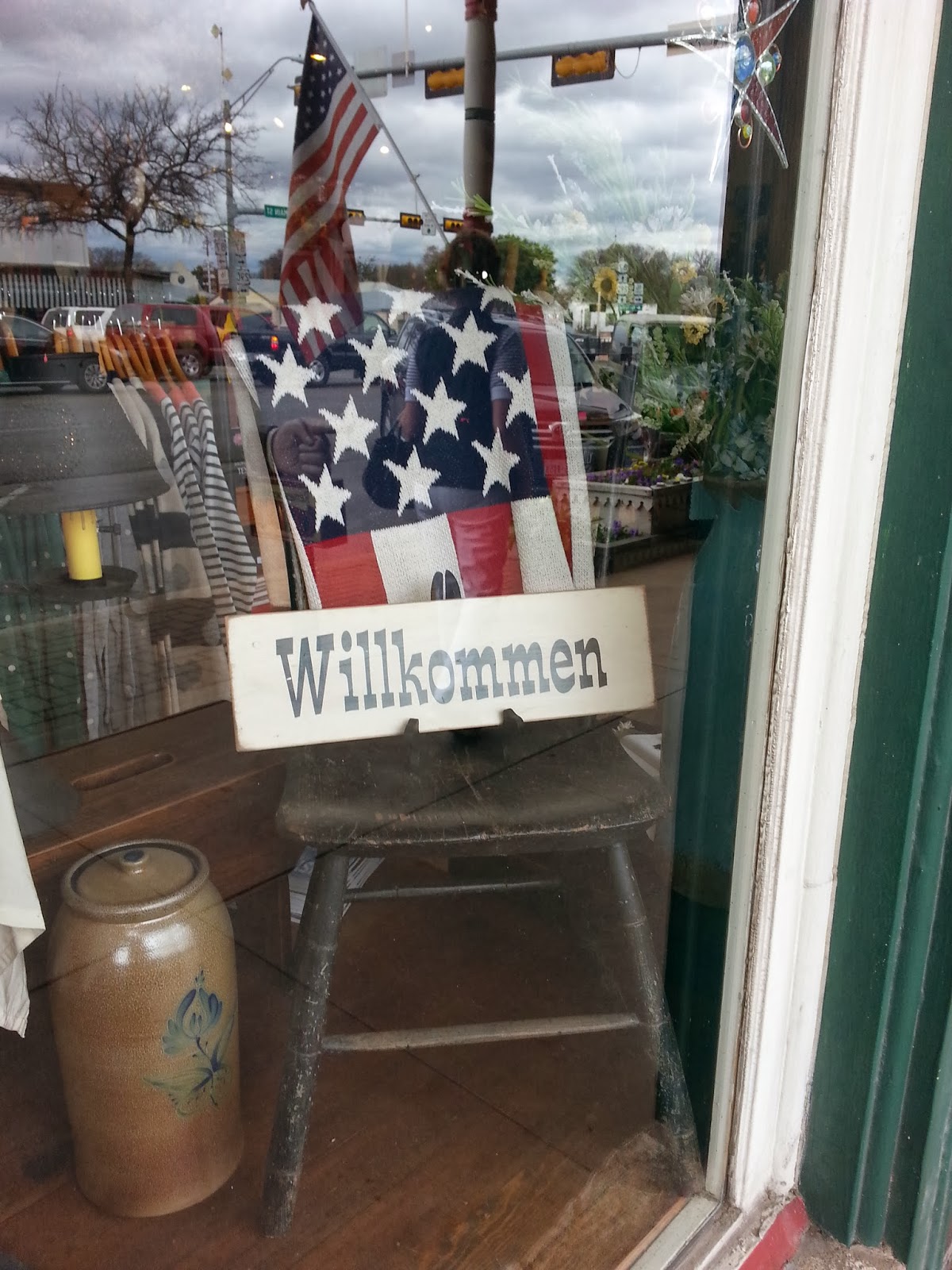 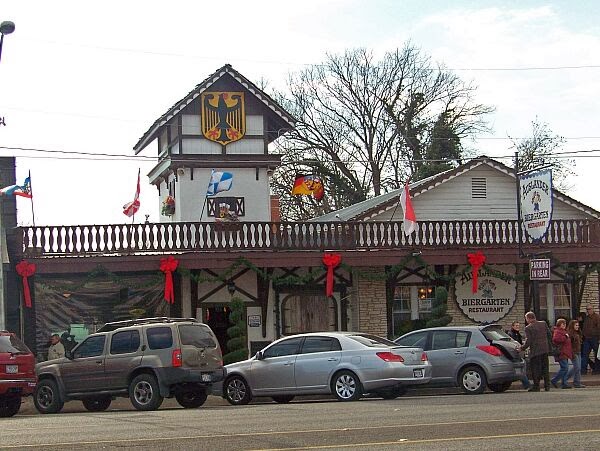 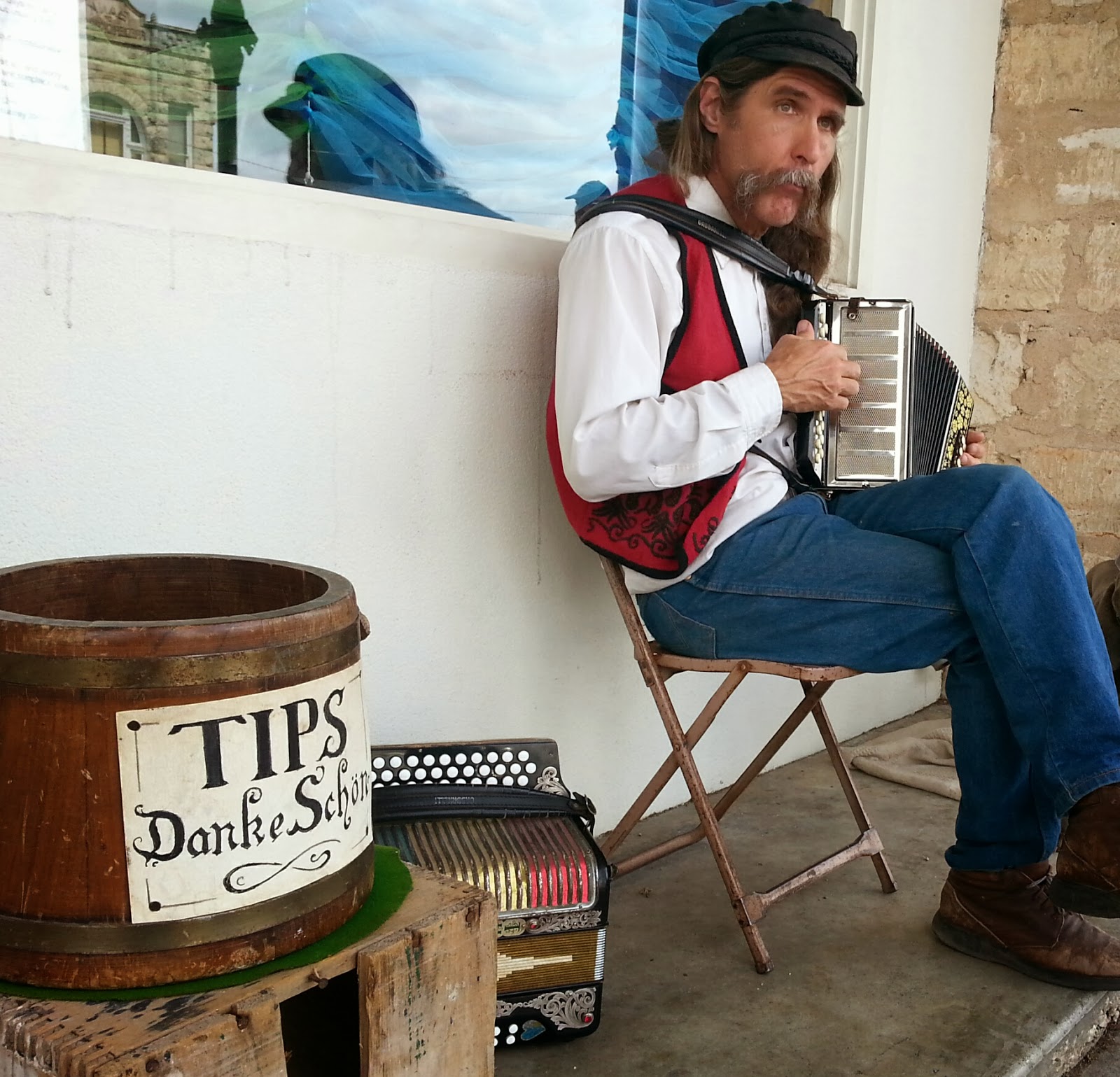 Most of the German immigrant farmers kept small Sunday houses so they could come into town on Saturday to do business, stay over on Sunday to go to church, and head back to their farms on Monday mornings.

Many Sunday houses are still in use today as cottages associated with bed and breakfast inns. This one is on the grounds of the Pioneer Museum. 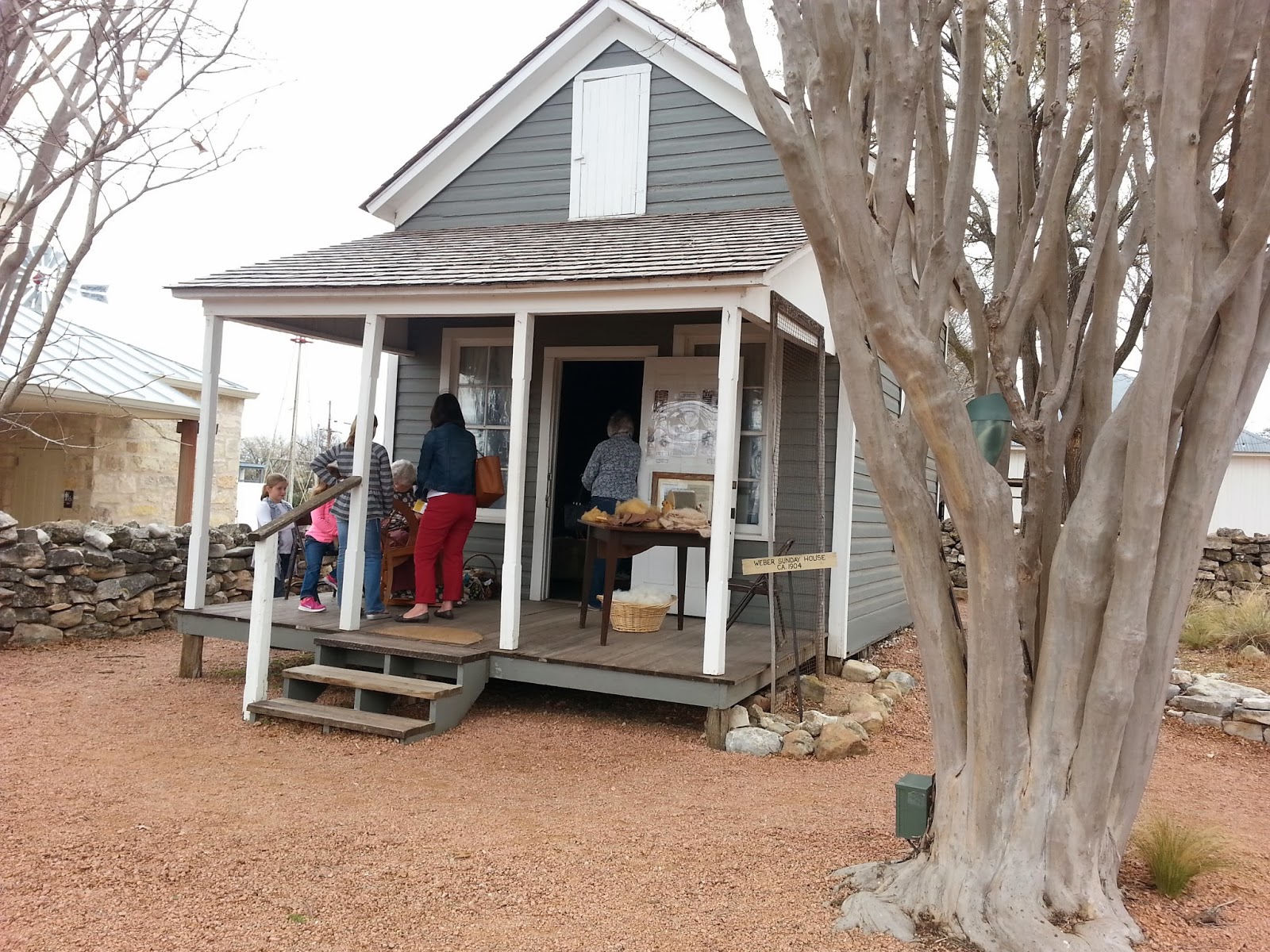 We were surprised to see that the National Museum of the Pacific War is located in this little town of Fredericksburg until we learned that Admiral Chester W. Nimitz, commander of the U.S. Pacific Fleet during World War II, was born here (Nimitz is another German name). 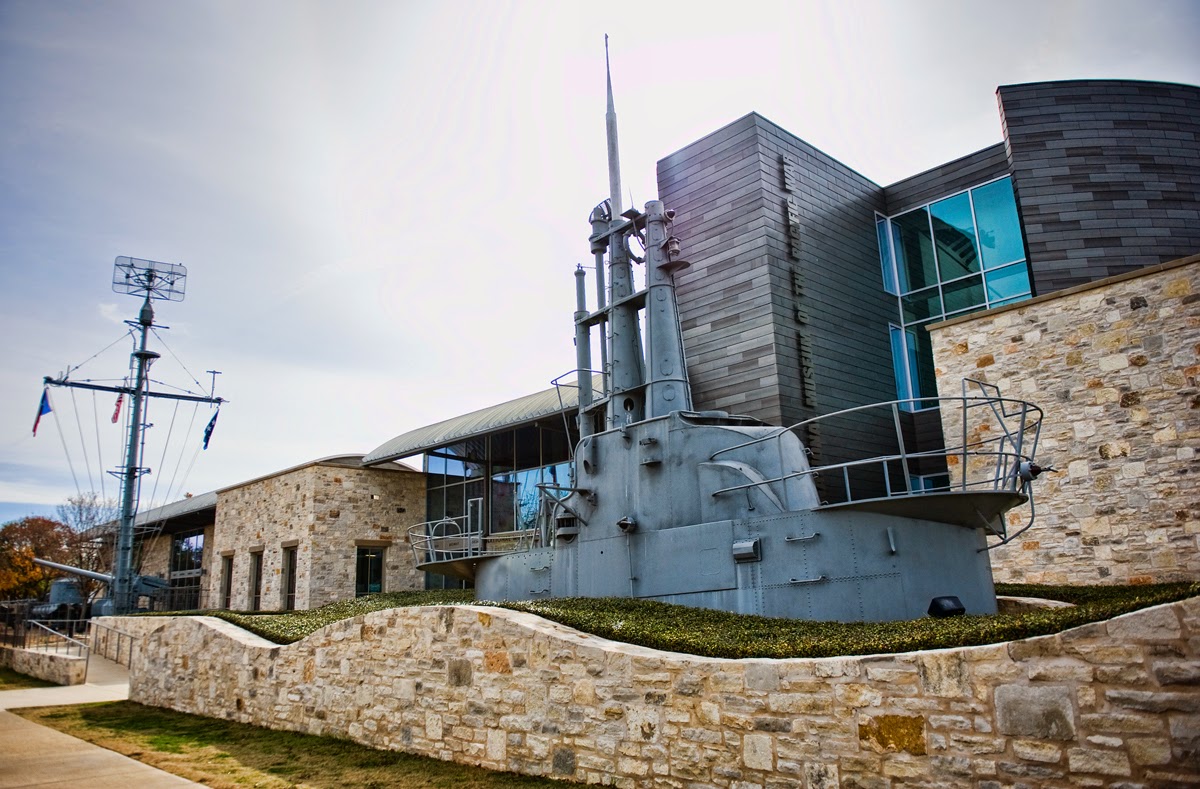 I went a little nuts with photos of boots, most of which I shot in Fredericksburg (as well as one in Luckenbach and another in Driftwood): 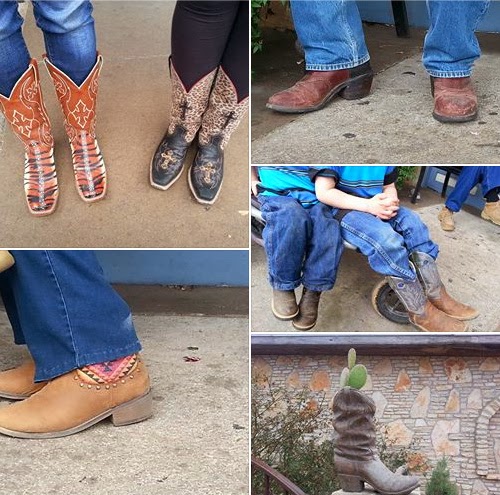 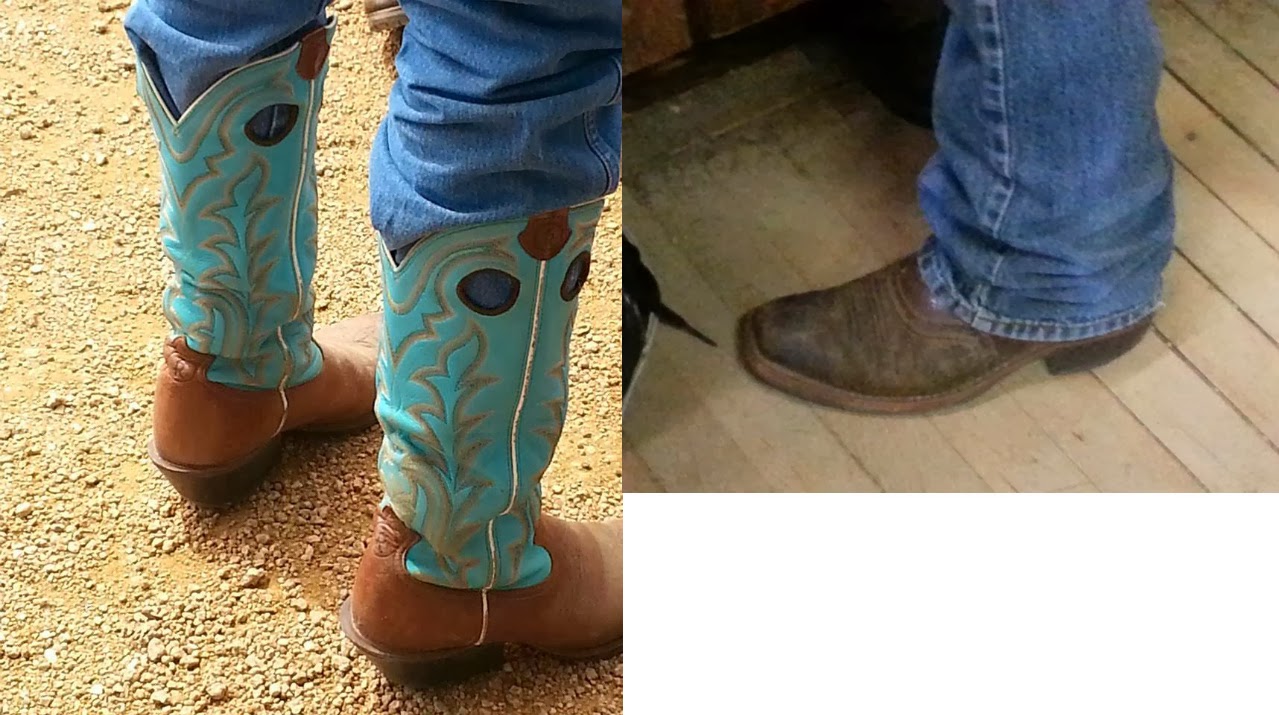 Then it was on to The Salt Lick in Driftwood, which my manicurist Kasi told me is the only place to go for the most authentic Texas barbecue in the state. It's in the middle of nowhere, way off the beaten path, but was well worth the trip! 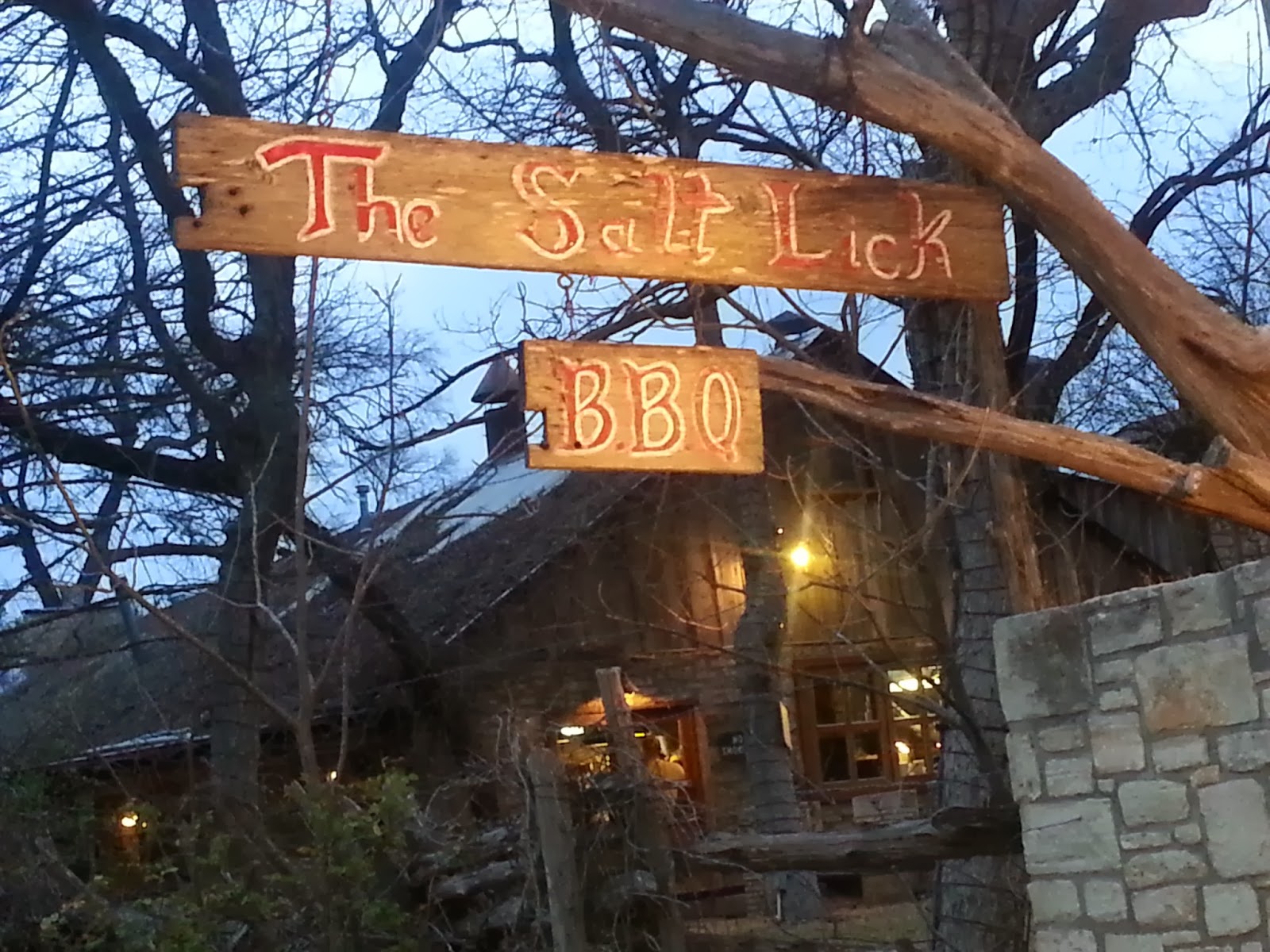 It's cash only and BYOB, so we opened the bottle of wine we bought at Sister Creek Vineyards. 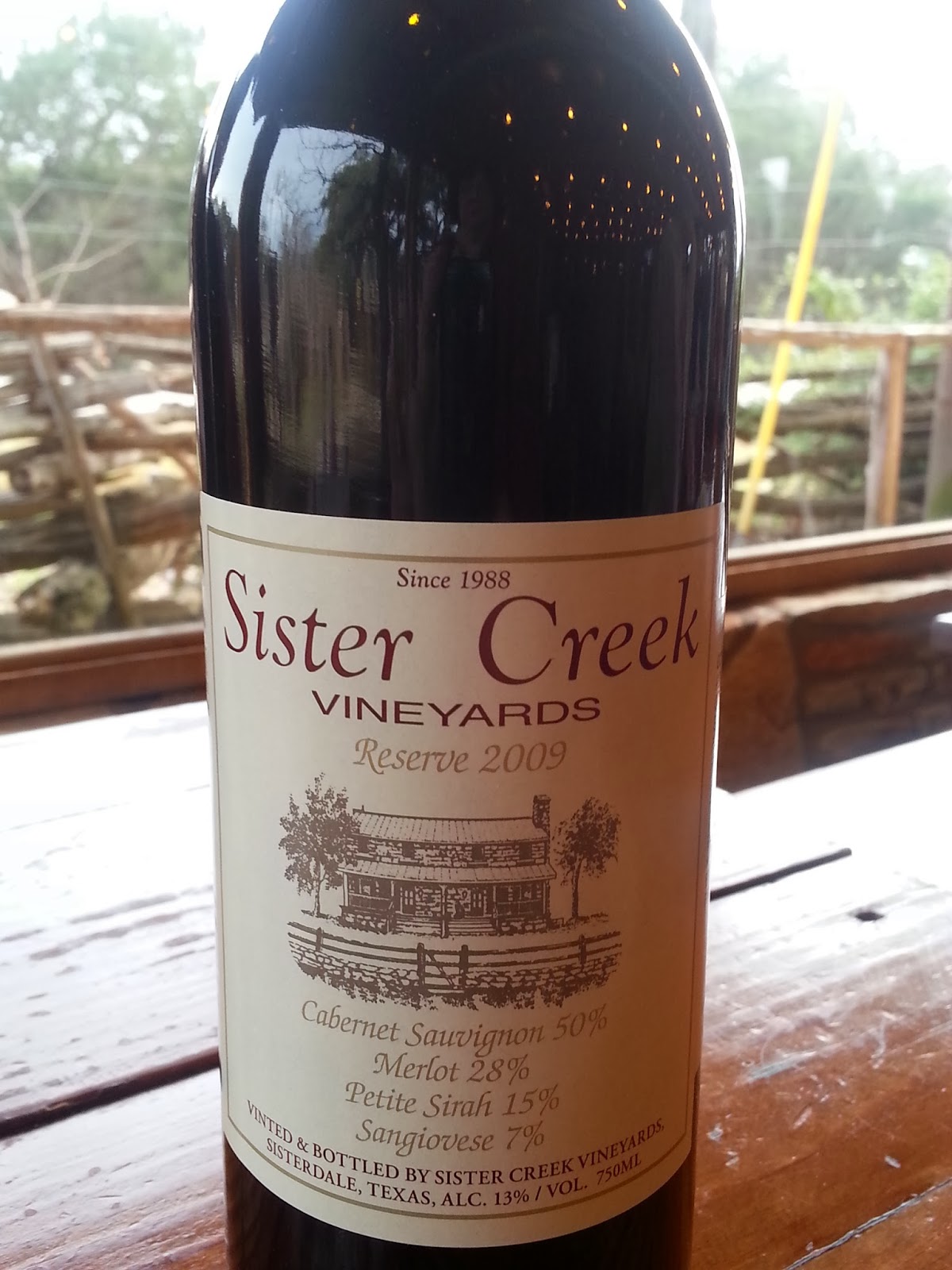 I've never had Texas barbecue before. This was like nothing we had ever tasted before. Absolutely mouth-watering awesome! We shared: one plate had pork ribs, sausage, brisket and turkey and the other had the meatiest beef ribs ever. 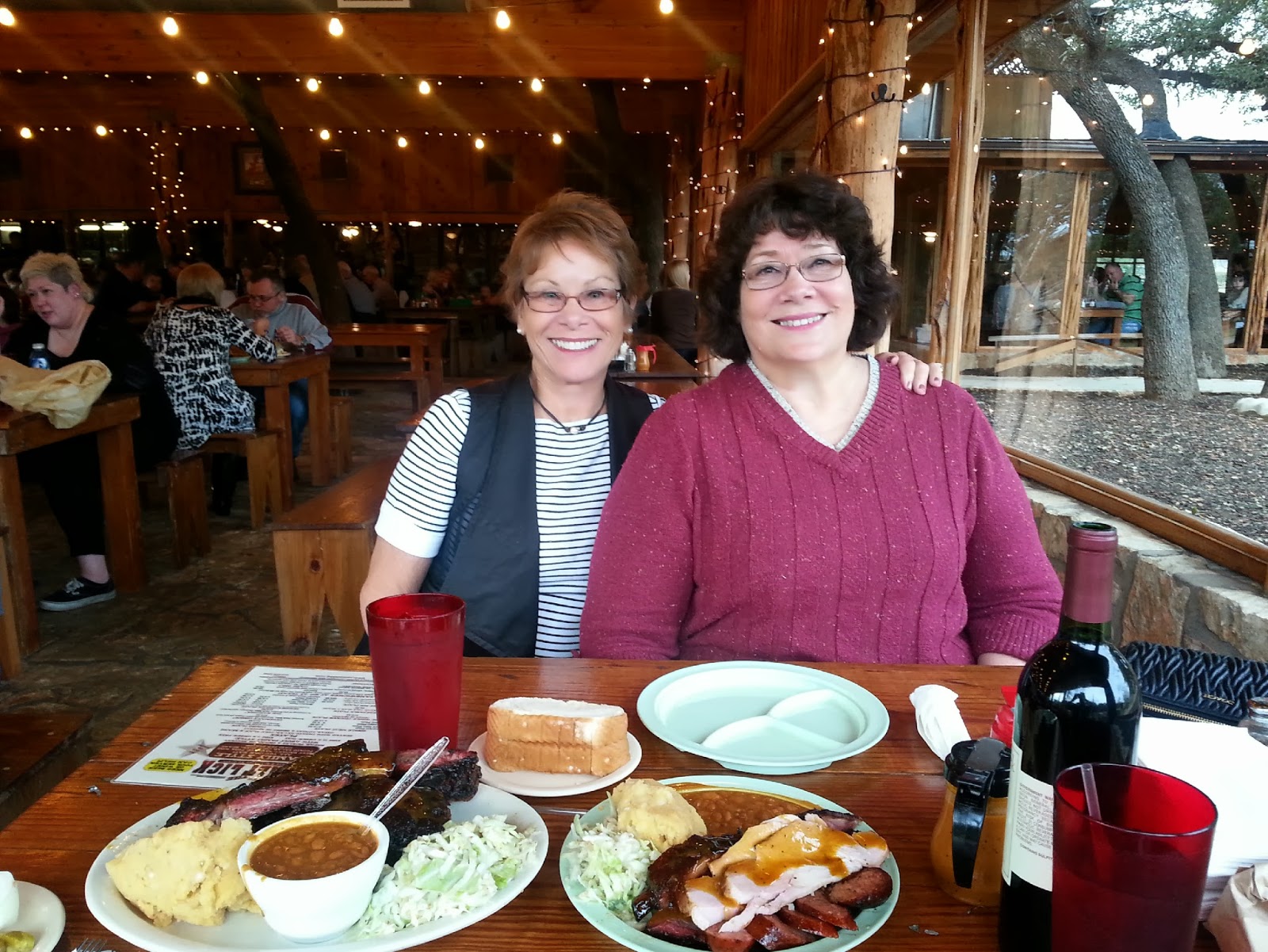 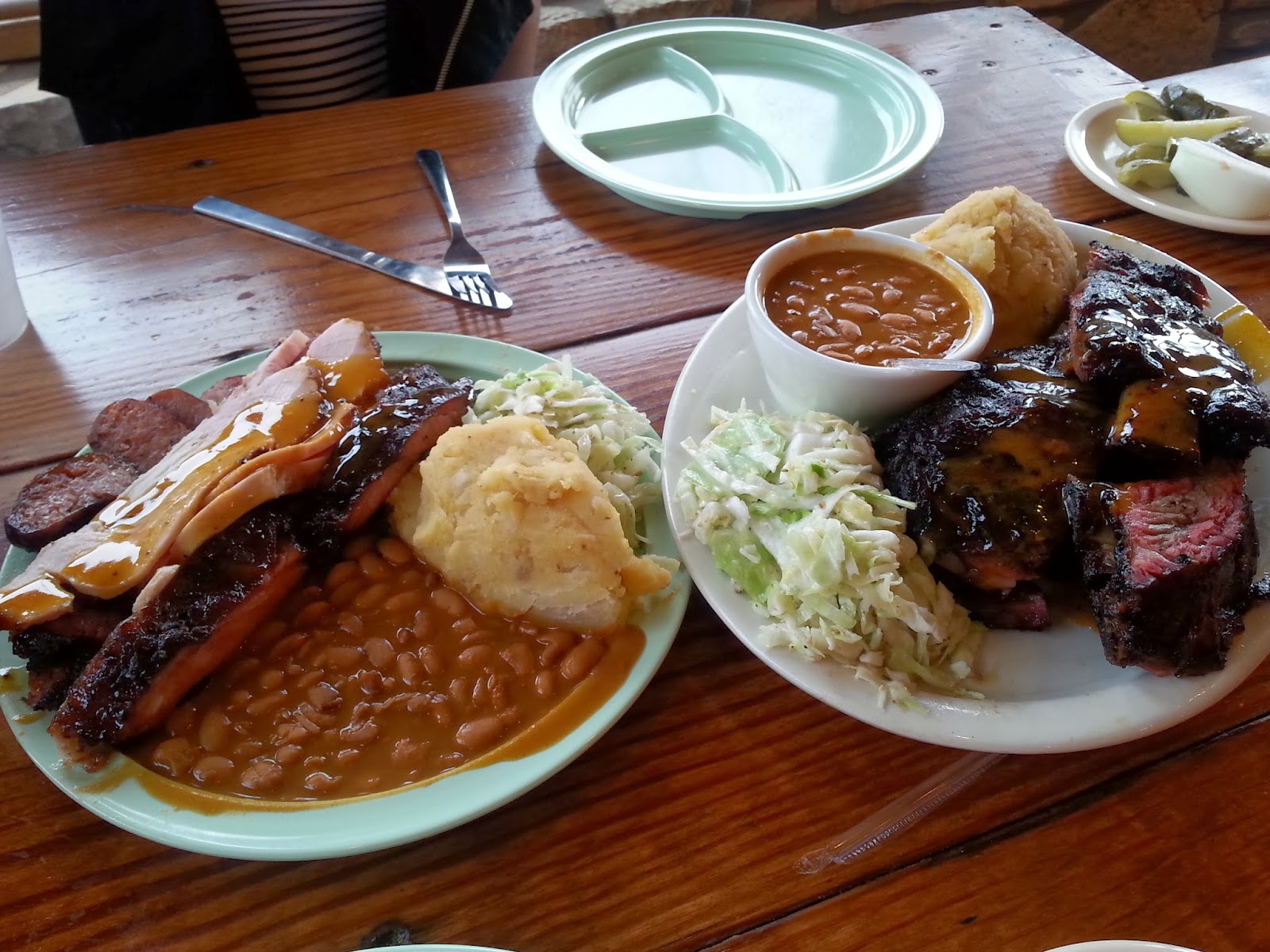 Everything is cooked over a wood fire. 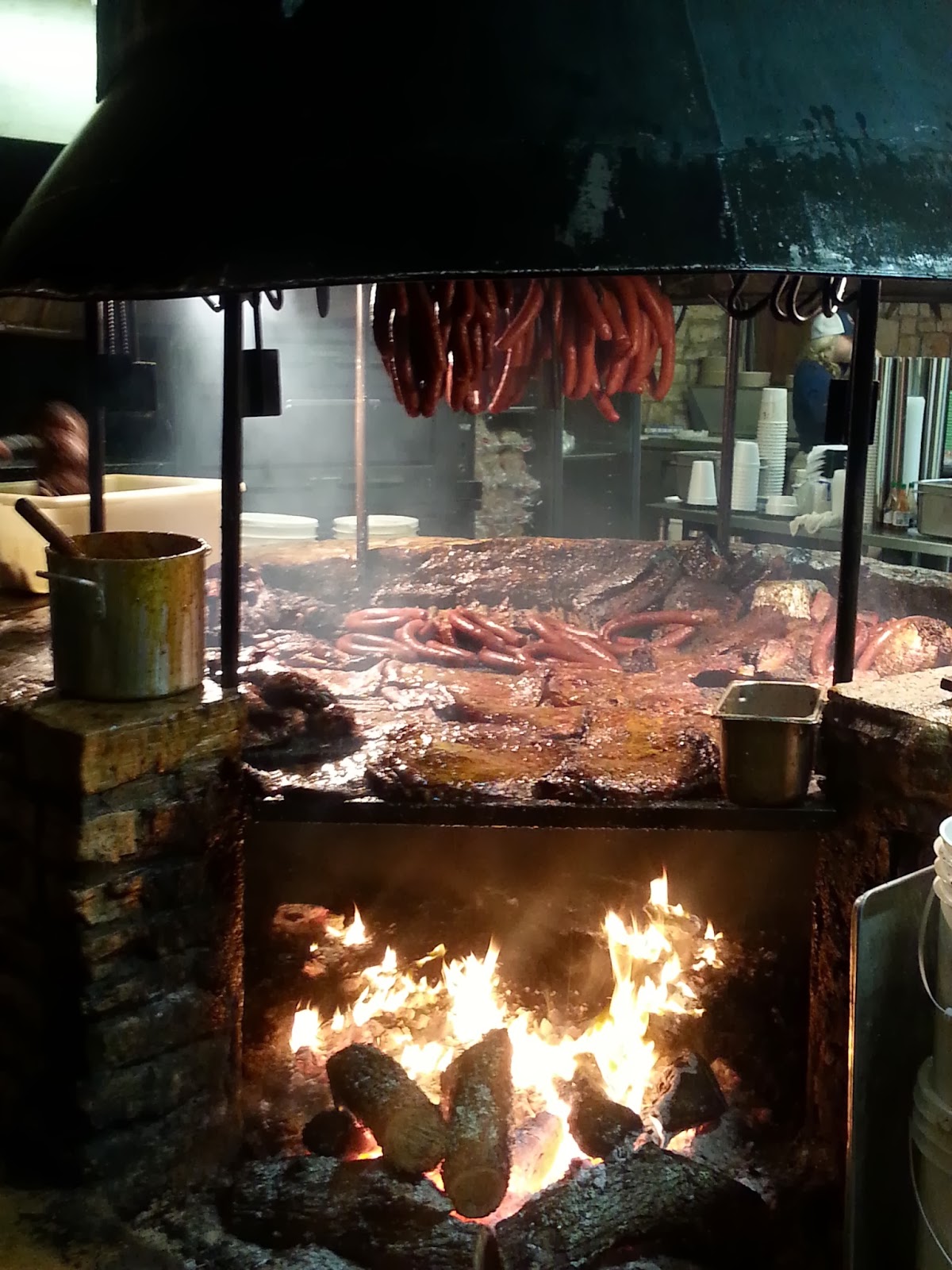 And of course there was live country music! This is Darrell Goldman. He and his group sang and strummed really wonderfully, including a Texas twist on Elton John's "Rocket Man." Really! It was awesome. 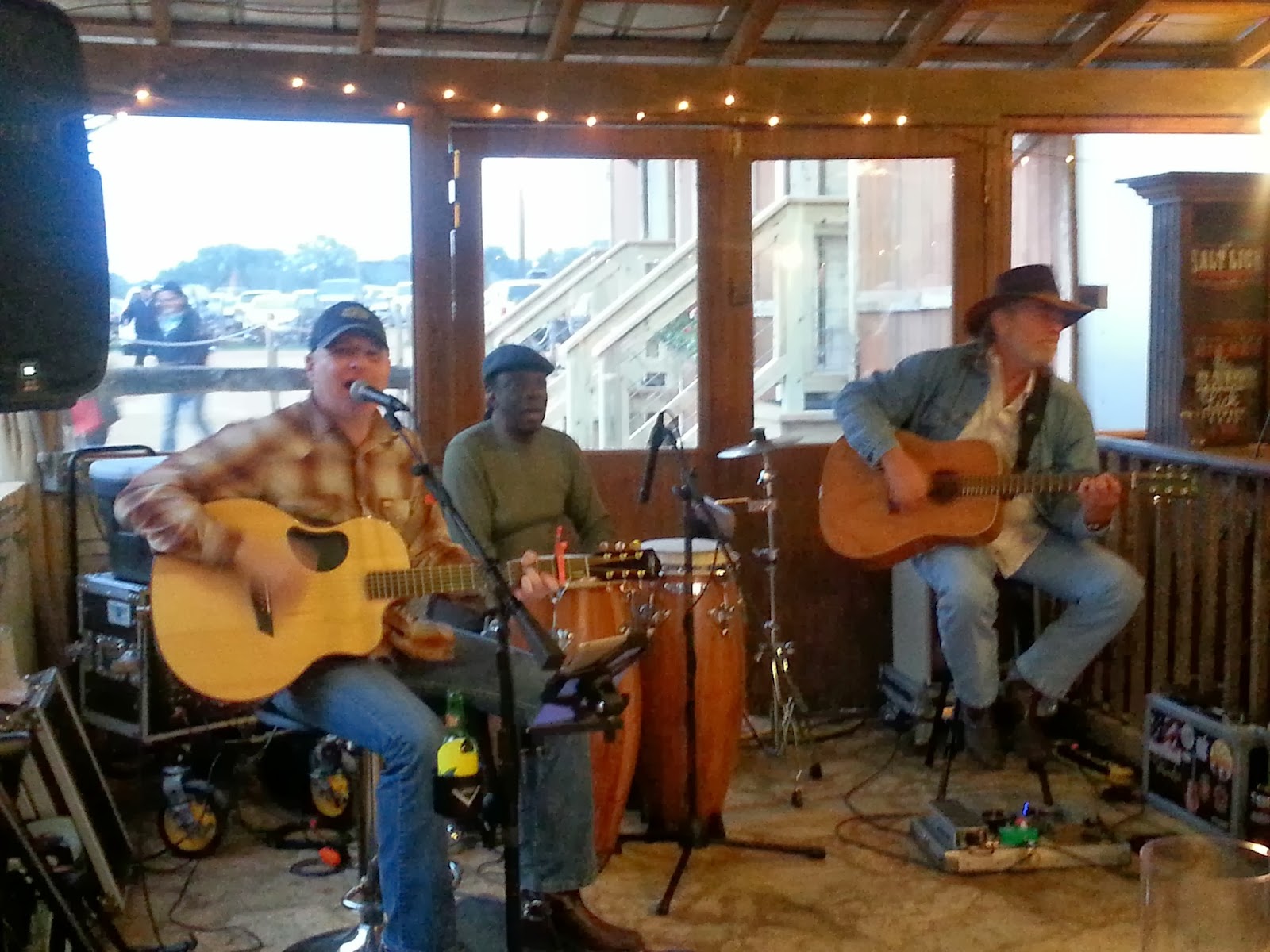 Suffice it to say we had a terrific road trip yesterday!

Today we're hunkering down and relaxing at the hotel. We might go to a movie later.