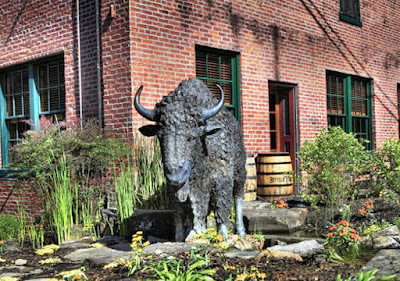 “The best whiskey is coming not from Scotland anymore,
but from Kentucky. Buffalo Trace, a bourbon distillery,
is arguably the best distillery in the world.”
– Jim Murray’s Whiskey Bible

The day before yesterday (Monday) I drove to the Buffalo Trace Distillery in Frankfort, Kentucky. The sign on Wilkinson Boulevard is pretty plain and simple, and I couldn't see anything that looked remotely like a distillery from the road, so I turned in to the driveway to see where it would take me. 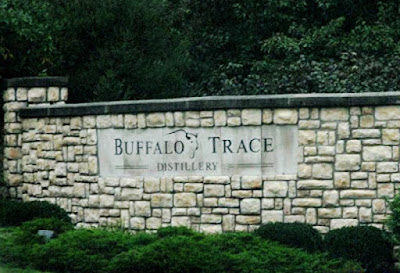 I drove down a lovely, tree-lined road and was amazed at what I eventually came to: a huge complex of historic buildings that spans 50 acres next to the Kentucky River. It is the oldest (200+ years) continually operating distillery in the U.S., not even stopping during Prohibition like other distilleries because the federal government allowed it to produce bourbon for "medicinal purposes"! 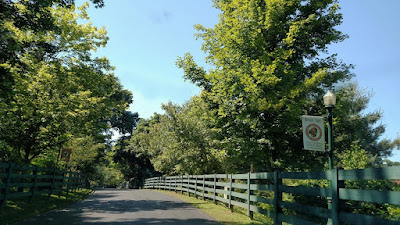 The entirety of the property has been named a national historic landmark by the National Park Service. The designation highlights it as a "highly intact example of pre-Prohibition industrial architecture."
Read more here: http://www.kentucky.com/news/business/bourbon-industry/article44430882.html#storylink=cpy

I took a tour with a few other visitors, led by a volunteer docent and Kentucky bourbon expert named Fred who told us that when he retired a few years ago he knew this was exactly what he wanted to do when he grew up! He was entertaining and informative and exhibited the kind of Southern hospitality I've come to expect the past few days. 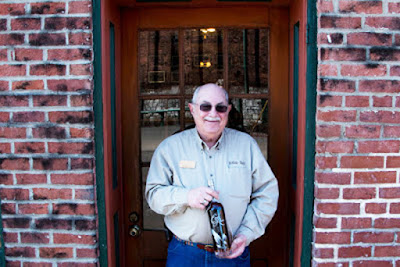 We started with a short film about the history of the distillery, then went outside to begin the tour.

The complex is so vast that it was impossible for me to capture it with one photo.

Here are a couple of individual buildings. 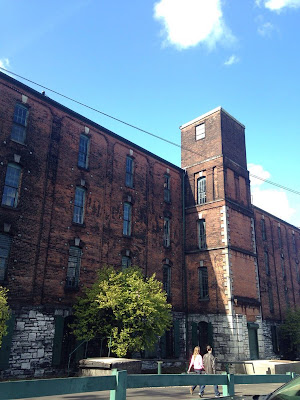 I love the water tower and the buffalo (well, bison) statue. Many moons ago wild buffalo roamed freely near the Kentucky River banks on trails they had made for centuries. These trails are called traces. 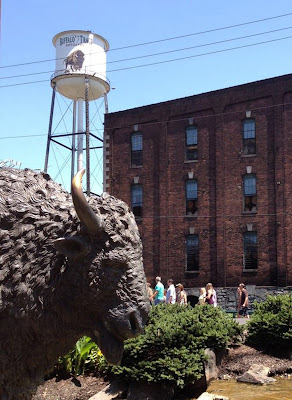 I felt fortunate when I came across this model at the visitor center. It gives a better sense of the scope of the property, with the Kentucky River in the background. 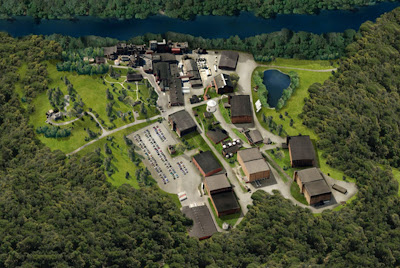 The bourbon-making process begins with a "mash" of rye, barley, wheat and corn that is ground to a course powder and cooked with pure Kentucky limestone water. 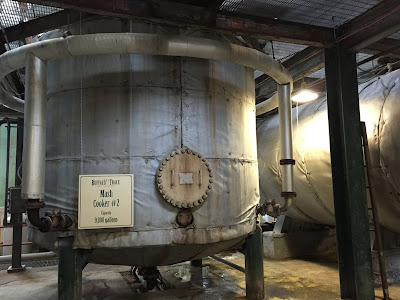 The result is sweet mash, which is combined with sour mash from a previous distillation and fermented for three to five days as yeast transforms natural sugars to alcohol.

Fermentation happens in huge exposed tanks with a number of batches at varying degrees of completion. Windows are always open to allow carbon dioxide to escape. 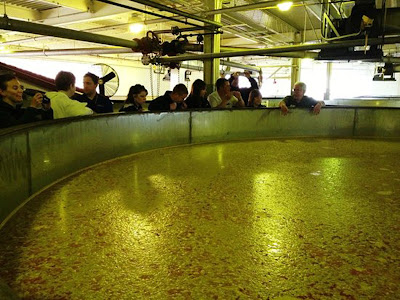 Then the distilling process begins. The fermented mixture enters the top of a very tall still and slowly descends naturally while steam rises and creates an alcohol-rich vapor. 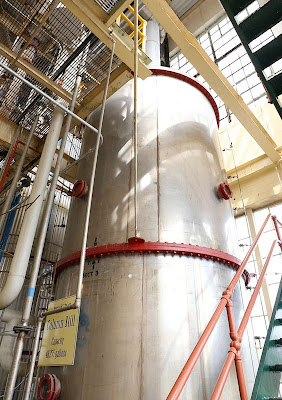 This vapor is recondensed into a clear liquid called White Dog. Fred poured some in a glass and invited each of us to take a whiff. It was so strong that our nostrils were burning! It smelled like rubbing alcohol, but stronger by a hundred fold. Note the buffalo on top of the barrel. 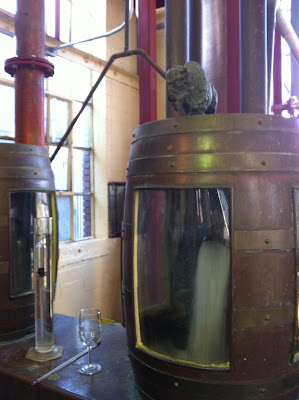 The next step is aging. Legally, bourbon isn't bourbon unless it is aged in new oak barrels that have been charred -- meaning literally lighting the inside of the barrel on fire until it turns black. The fire is so hot that charring only takes a minute or two. The charring is a critical step that caramelizes the wood and allows the bourbon to extract flavors and colors as it matures. 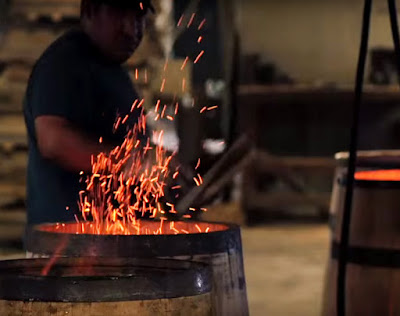 After the distilled spirits are transferred to barrels, a mini rail line transports the barrels from distillery to warehouses -- or, as the pros call them, rickhouses. 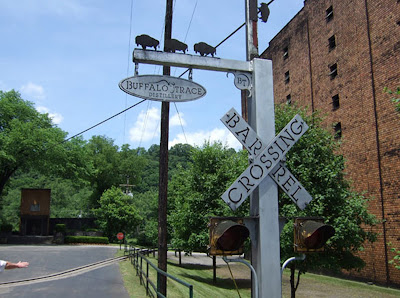 A "rick" is a section of barrels 14 long and 3 high. The placement of every single barrel is critical to the character of the final product. Even the levels in the respective buildings can make a difference, from top floor to basement. The barrels are stored for a minimum of two years and up to 23 years or sometimes even longer as the bourbon ages. 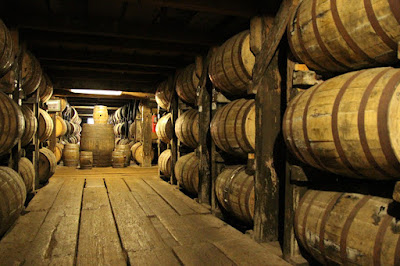 I wish my blog had smell-o-vision so you could experience the pungent aroma of a rickhouse full of maturing bourbon that comes from the liquid evaporating through the oak barrels -- or, as Fred called it, "the angels' share."

Even outside of the rickhouses, where the windows are kept open (with iron bars across them for security), the fragrance in the air is quite strong. 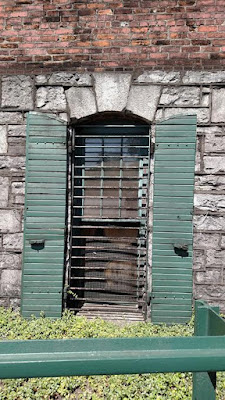 Legally the barrels can be used only one time. What happens to them after that? Some get shipped to Mexico for tequila aging and Scotland for scotch aging and elsewhere to become containers for everything from coffee and tobacco to beer and maple syrup. Still others are turned into decorative items such as planters.

The final step before bottling is proof, which means adding some pure and crisp Kentucky water so the bourbon is not overpowering. Bourbon straight from the barrel is 140 proof, which is much too strong for most people's taste and constitutions.

Many of the brands are labeled and boxed by hand. On our tour we got to watch this crew bottling and labeling Blanton's Bourbon (there were more than these three workers in the room). 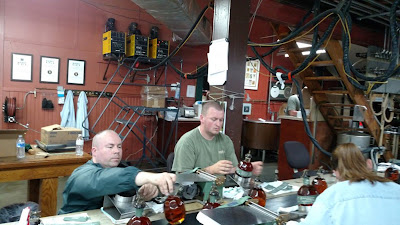 Our final stop on the tour was the tasting room upstairs at the visitor center, where only a handful of brands are available on a very limited basis (read: no seconds). I confessed to Fred that I'm not exactly the biggest bourbon aficionado in the world, so he recommended the Buffalo Trace Bourbon Cream. I was sold! (Think Bailey's but more delicious, with Kentucky bourbon instead of Irish whiskey.) 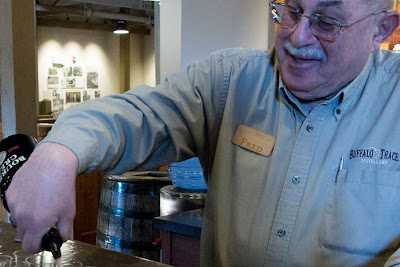 Not just the namesake bourbon comes from the stills and rickhouses of Buffalo Trace, but also other labels such as Eagle Rare, Ancient Age, W.L. Weller and more.

And then there’s the rarest of them all at the Buffalo Trace Distillery – Pappy Van Winkle. Only about 7,000 cases are distributed for sale every autumn. (By comparison, Jack Daniels, which is not distilled at Buffalo Trace, produces about seven million cases annually.) There's an interesting Fortune Magazine article here.

The fortunate few who have sipped Pappy Van Winkle (we didn't) pay up to $5,000 for a bottle even though the suggested retail price is $80 to $250 per bottle, depending on how long it has aged (15, 20 and 23 years). It is considered the most coveted bourbon in the U.S., one of the best in the world and unquestionably the most elusive.

And what rhymes with elusive? Reclusive. Buffalo Trace is not on the famed Kentucky Bourbon Trail tour. This distillery prefers to remain off that beaten path. The result is that it's not teeming with tourists.

Some final thoughts about Monday:

A week or so before I left on my Freedom Tour I was visiting my daughter Jessica and her wife Trina in San Diego County. They're bourbon aficionados; I'm not. Nevertheless, I promised faithfully that I would not go all the way to Kentucky without picking up some some bourbon from wherever Buffalo Trace is bottled. I had no idea what Buffalo Trace was until that day.

Bourbon is a religion of sorts in Kentucky. It's second only to Jesus.

All bourbon does not have to be made in Kentucky. But to be called Kentucky bourbon, it does.

I was at the Buffalo Trace Distillery for more than three hours. I took the Hard Hat Tour first, which is a behind-the-scenes look at the production process, followed by the Trace Tour, which takes a look at the barreling, warehousing and bottling process.

A couple of times the tour involved climbing long flights of stairs. When that happened I happily stayed behind on terra firma so I wouldn't slow everybody down with my footsie numbness and my cane.

I have a newfound respect for Kentucky bourbon and I know now that all bourbon is whiskey but not all whiskey is bourbon,