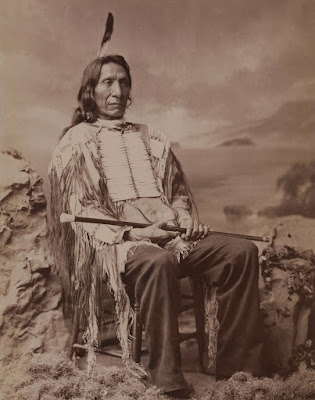 The Pine Ridge Reservation in southwest South Dakota near the Nebraska border is the site of several historic conflicts, most notably at Wounded Knee in 1890 when the U.S. Army's Seventh Cavalry massacred Chief Big Foot's band of Sioux; and in 1973 when local Oglala Sioux and members of the more urban American Indian Movement (AIM) occupied Wounded Knee in a 71-day standoff with FBI agents and U.S. Marshals that left two people dead, one person missing to this day and several injured.

On Sunday, June 26, I made my way from Chadron, Nebraska, to the Pine Ridge Reservation. 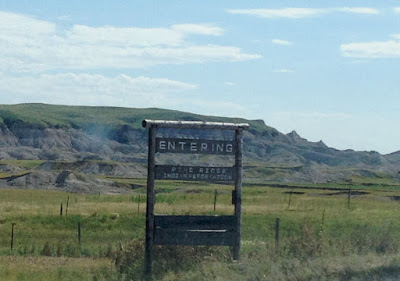 Some signs, including the one below, are in two languages -- Oglala Sioux and English. 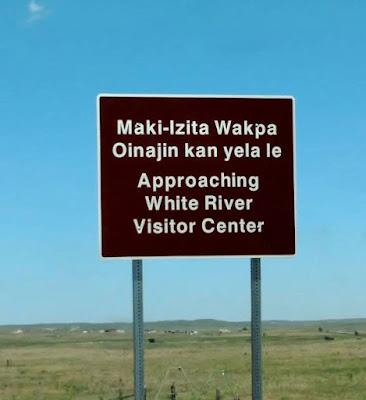 I wondered if there are local radio stations so I pushed the AM button on my car radio. There were a couple of country music stations and a rock station. Then I pushed the FM button and found KILI, a station that was playing traditional Sioux music with ritual chants and drumming, as well as modern Sioux music and some interviews. It lent itself beautifully to my experience as I drove through the reservation. (I'm streaming KILI as I write this.)


You have to truly intend to go to Wounded Knee; it's not a place you just happen to stumble upon. It is hours away from any freeways. I became quite nervous a couple of times because there were long stretches on the Pine Ridge Reservation when I had no service on my phone and the GPS signal was lost -- in the middle of nowhere.
I finally arrived and at first was surprised (not so pleasantly) that there is not much to see at Wounded Knee. There is this big sign that explains what happened as well as some Oglala Sioux artisans selling their wares from a couple of shade structures. (Click on the photo of the sign to see the text more clearly.) 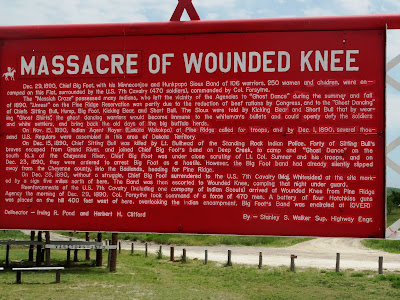 On top of a hill across the road there is a cemetery. I asked one of the artisans about it, since there was no signage and I didn't know what it was, and he said it is private property and that I could drive on up. He said that since the cemetery is on land not owned by the Oglala Sioux nation, they have no control over it and no permissions to tend to it. 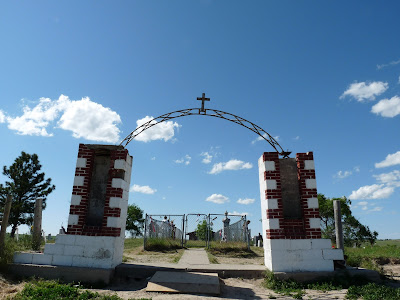 In addition to individual 20th century graves, there is a monument at the site of the mass grave of about 150 of the more than 300 Sioux killed during the massacre at Wounded Knee. 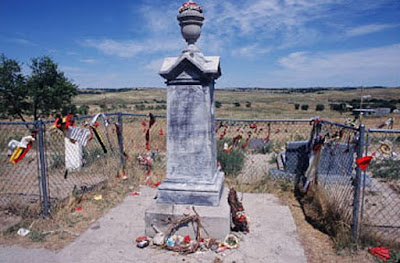 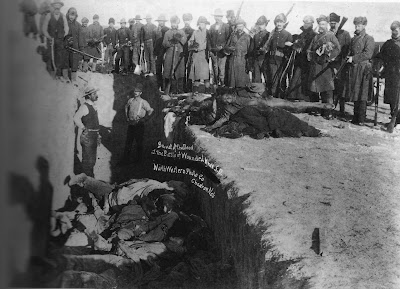 At first I was dismayed that the cemetery is not well maintained at all and the entire Wounded Knee area is very sparse when it comes to signage and education. But after I stood there for a few moments on top of that hill, taking it all in, I had a complete change of heart.

I swear I could hear the cries of the 300 innocent and unarmed Sioux men, women, children and elders in the wind that whipped around the hillside. I looked out at the fields below and imagined the horror they suffered at the hands of the U.S. Army's Seventh Cavalry.

I got weepy as I read the names on the monument of the known victims who were massacred and then tossed into the mass grave by members of the Seventh Cavalry. (Click on the photo to see the names better.) 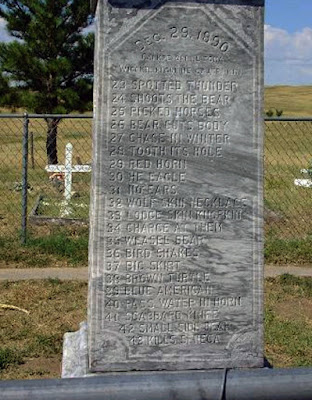 I felt like an intruder as I watched a young Oglala Sioux man walk into the cemetery, tie a bright yellow prayer cloth to the fence and then stand with his face toward the sky and his eyes closed. I chose not to take a photo of this intimate moment. I simply turned away in the opposite direction to leave him in peace. There are many prayer cloths on the fence, and many offerings (my term -- I'm not sure what they are) at the foot of the monument.
A couple of years ago I read "The Heart of Everything That Is," the best-selling biography of the Sioux chief Red Cloud who organized resistance to white expansion into his people's territory and later traveled to Washington, D.C., to lobby for Native American rights. He died on the Pine Ridge Reservation in 1909 when he was 88. His grave is at this same cemetery. 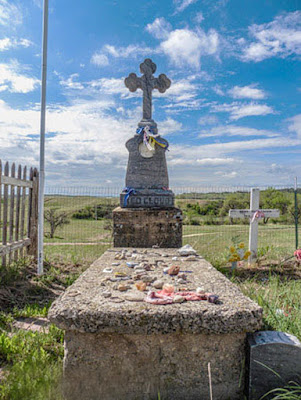 Red Cloud is the man in the photo at the top of this post. The photo is courtesy of South Dakota State University.

As I left the cemetery, my heart was filled with sadness over what took place at Wounded Knee in 1890 and the very hard lives experienced even today -- 126 years later -- by the people of the Pine Ridge Reservation.

This sign is about a half mile down the road: 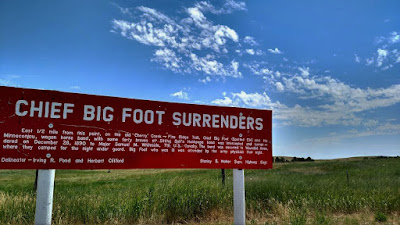 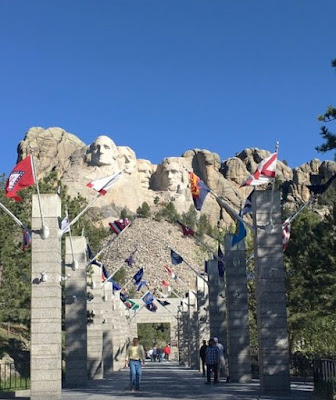 After leaving the main plaza area, where I spent about an hour, I began driving down the curving mountain road and came upon George Washington peeking out in profile: 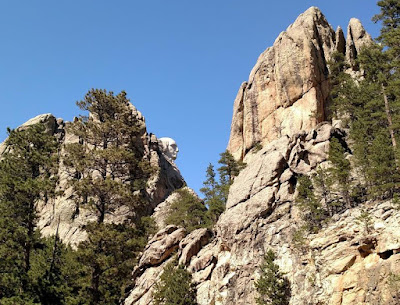 Then I drove to the Crazy Horse monument, a work in progress. As I got closer to the mountain, the better I could make out his face. 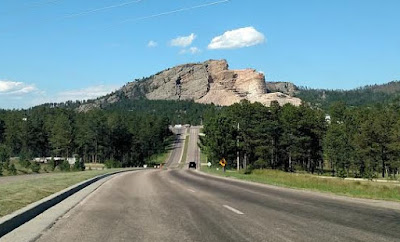 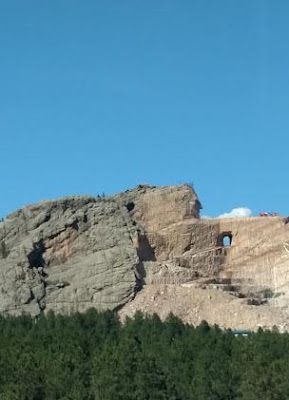 Resisting efforts to force the Sioux people onto reservations, Crazy Horse was a fierce warrior, chief and strategist who fought alongside Sitting Bull and others in the so-called Indian Wars and was instrumental in the defeat of Col. George Armstrong Custer and the Seventh Cavalry at the Battle of the Little Bighorn.

At the visitors center there is a sculpture of what the Crazy Horse memorial will look like when it is completed. It is positioned perfectly for photo-taking: 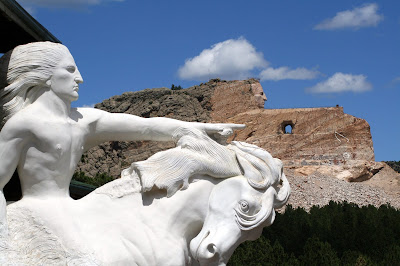 Then it was on to Custer State Park, where buffalo (bison) roam freely. I was hoping to get a glimpse of some. I was not disappointed! The ones at this meadow were very close to the road, just minding their own business. 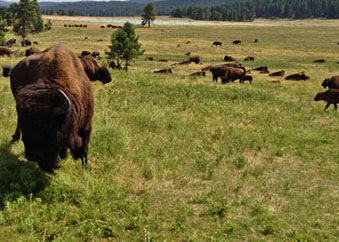 Apparently this is not always the case! 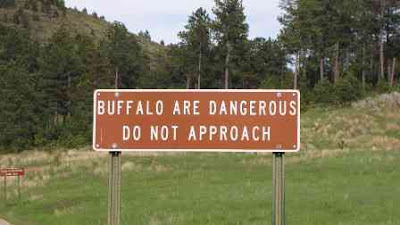 I visited plenty of other places and had additional adventures over the last three days, but I'll leave it here for now. This blog post is getting too long-winded, I think!

When I was in school in the '50s and '60s, Wounded Knee was portrayed in history books as a battle. It was the cavalry vs. the Indians and it was every man for himself. More than a century following what we now know was an all-out massacre, history books -- what little they include about Native American history these days -- are being corrected.

Many times over the past few years I have heard talk about adding a face to Mt. Rushmore, with suggestions of everyone from President Barack Obama to Susan B. Anthony to Dr. Martin Luther King Jr. I think this is a terrible idea.

Imagine hiring an artist to add a second person to Rodin's "The Thinker," a third person to Grant Wood's "American Gothic"  or additional people to Rembrandt's "The Night Watch."

Doane Robinson was the state historian for South Dakota whose vision was for four faces -- all of them U.S. presidents -- because George Washington was the first president of the United States, Thomas Jefferson because he crafted the Declaration of Independence, Theodore Roosevelt because he was the first to extend conservation protections to federal open space and Abraham Lincoln because he preserved the Union and abolished slavery. Sculptor Gutzon Borglum and his team brought Robinson's vision to life.

The historical photos of Red Cloud and the mass burial of massacred victims at Wounded Knee are courtesy of the Library of Congress.