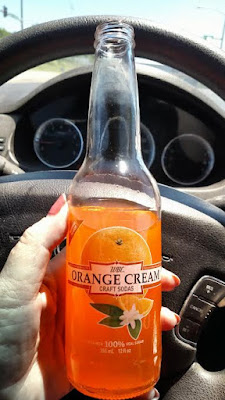 Yesterday, after leaving Edmond, Oklahoma, I went back on old Route 66 to Pop's in Arcadia, Oklahoma, where I bought an orange cream soda for the road.

I couldn't stay on Route 66 for long because it would soon curve to the north toward Chicago and I needed to head east to Little Rock. I took a byway that connects Route 66 to the I-40.

The first stop I made was in Okemah, Oklahoma, the birthplace of Woody Guthrie. 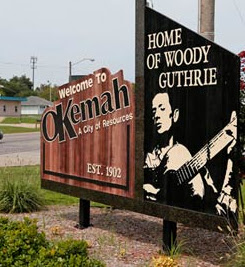 Okemah was a time-worn town with a depressed economy for generations. Whenever opportunities presented themselves to boost the economy by paying tribute to Woody Guthrie, the conservative city council and chamber of commerce said no way due to his controversial ties to the Communist Party.

This strained relationship between the city's native son and the elders persisted for many years until long after his death (and theirs).

Now he has been embraced, and tributes to him are everywhere.

This is a whimsical series of water towers -- Hot, Cold and Home of Woody Guthrie. 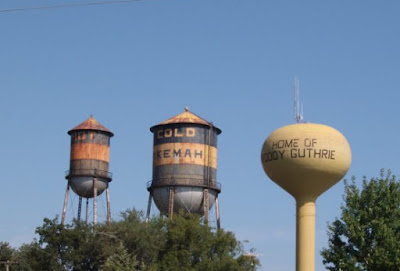 And this is a statue in a pretty little park. Is the guitar out of proportion, or is it just me? 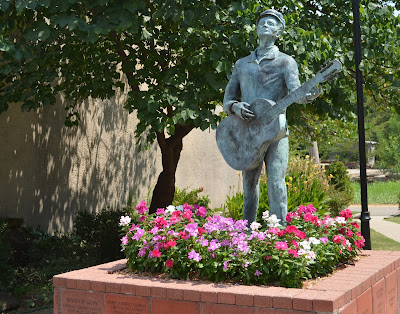 There is even an annual Woody Guthrie Folk Festival that brings thousands to town...and they all spend tourist dollars.

No doubt Okemah would be an economically depressed town to this day if not for one sure thing: As time marches on, people soften and history tells a more balanced story.

Easing on down the I-40, I thought it would be interesting to take a little detour to Muskogee, made famous by the iconic Merle Haggard song.

But this being a Sunday, I figured there would be no chance of Old Glory waving down at the courthouse, so I kept driving.

Going east on the I-40 a few more miles, I stopped for gas in Sallisaw, Oklahoma, Turning into the gas station, I saw a little blink-and-you'll-miss-it sign that said "Sequoyah's Cabin" with an arrow pointing down a little road.

Wait, I thought -- Sequoyah? As in the Cherokee leader and visionary who invented an alphabet for his people? That Sequoyah?

The sign didn't say. So of course I had to go take a look. I'm having an adventure, remember?

Following the arrow, I went down the narrow, winding little country road -- for seven miles! (There were another couple of signs along the way, so I knew I wasn't lost.)

Even though it was Sunday, the national historic landmark was open -- for another 20 minutes.

The cabin was constructed by Sequoyah himself in 1829 when he was in his 50s. At that time, Oklahoma wasn't Oklahoma. It was Indian Territory,

The cabin, which is quite small with only one room, is preserved and protected inside a special memorial building. 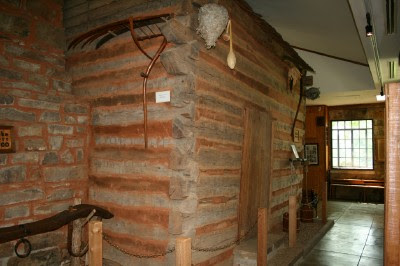 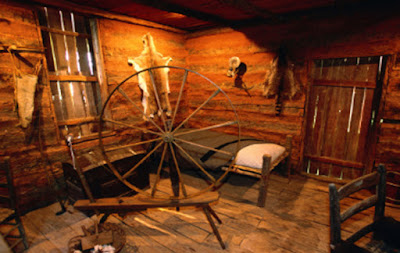 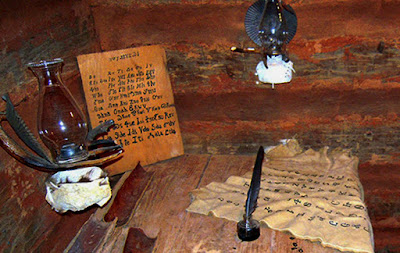 I can't even imagine the number of people who do not take the time to go down that little country road for seven miles. They have no idea what they're missing.

I am very grateful that I have the flexibility of time to do some exploring.

Tonight I'll be in Memphis, Tennessee, where I'll stay put for a couple of days.

Stay tuned tomorrow to see what I did today.