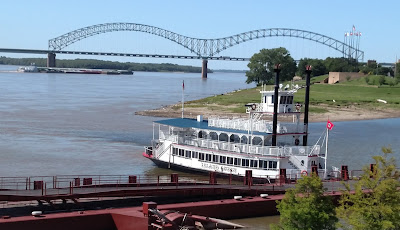 Yesterday, June 7, was our last full day in Memphis. My sister Charlou, our lifelong friend Joanna and I went to the Port of Memphis for a two-hour cruise on the Mississippi River aboard the Island Queen.

The Hernando De Soto Bridge is in the background behind the Riverboat. In 1519 De Soto, a Spanish explorer, was the first European to discover the Mississippi River.

Many locals call the structure the Dolly Parton Bridge. I can't imagine why!

I wasn't able to capture the paddlewheel in the photo above so I took a photo of it when we were on the riverboat. The long boards mounted on the wheel serve as oars of a sort, constantly pushing against the water and propelling the riverboat forward. 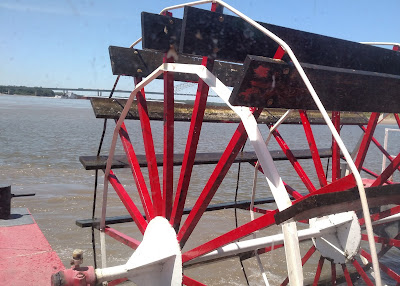 This very long barge carrying tankers of petroleum was going faster than the Island Queen was. We were definitely up a lazy river! 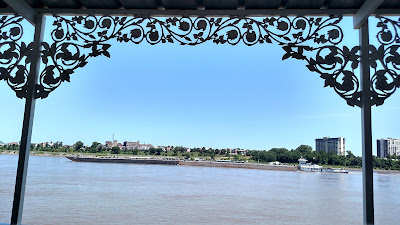 Below are three one-mile-long bridges that run parallel to each other. One is the Memphis-Arkansas Memorial Bridge that carries vehicle traffic from five freeways across the river in both directions, and two are railroad bridges. Far in the background are the Hernando De Soto Bridge; the massive, iconic Memphis Pyramid that is now home to the largest Bass Pro Shops megastore in the world; and downtown Memphis. 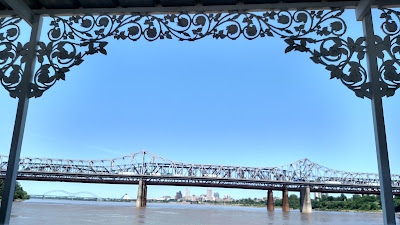 We had a great time and the tour was entertaining and educational.

Next we went to the elegant and historic Peabody Hotel in downtown Memphis. We were just in time for the mid-afternoon appearance of the Peabody ducks. Charlou and I had seen the fun ritual in years past; this was Joanna's first time.

In the 1930s the Peabody general manager and a friend of his returned from a hunting trip and decided to have a little fun by placing some live decoy ducks in the hotel's fountain. A former circus animal trainer eventually trained the ducks to perform the Peabody Duck March as they came out of the hotel elevator and got into the fountain to swim around for a while, then marched back to the elevator again before they returned to their permanent home on the hotel's roof top. To this day a duckmaster oversees the daily rituals. You can see some fun facts here.

I didn't have the best vantage point yesterday, but I still have photos from my trip to Memphis with Tom Coston in 2009 when we got to the Peabody good and early.

Here are the ducks in the fountain. . . 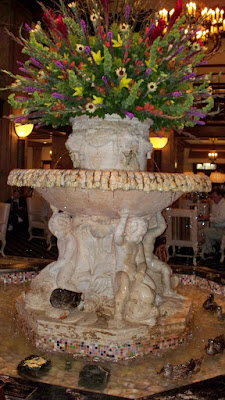 . . .and hopping onto the red carpet for their march back to the hotel elevator. 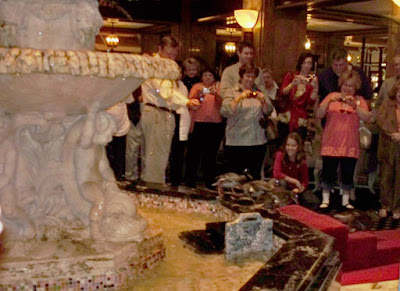 When the throngs of onlookers left the hotel yesterday, we three stayed for a cocktail in the lounge.

Joanna joined us a little late because she stopped by the hotel's Duck Store to buy a shirt for a neighbor. 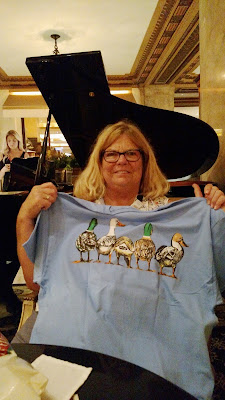 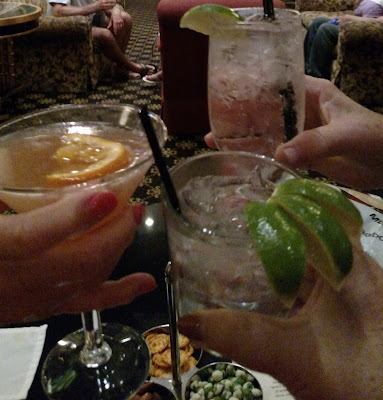 The pianist, Kurl McKinney, was playing jazz, standards, gospel and other styles. I asked for anything by Count Basie and he obliged. 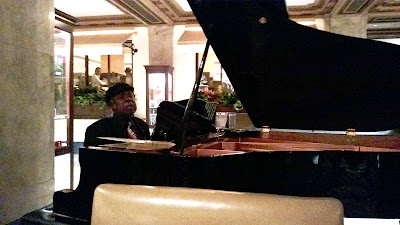 Eventually he put on his Elvis sunglasses and did a medley of Elvis hits. A group of teenagers knew every word, which did my heart good! Charlou, Joanna and I sang along as well, which was so fun. 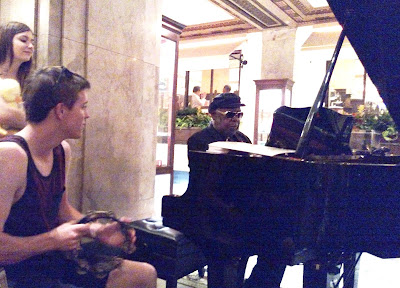 During a break he sat and visited with us. It was fascinating hearing his story. He was the son of a low-income farmer in Mississippi and was the first in his family to graduate from college, earning a degree in music. His son, Alvin McKinney, is a professional saxophone player and minister in Los Angeles. 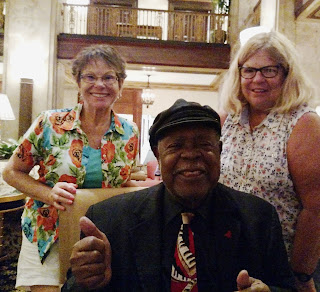 We ate dinner at Jim Neely's Interstate Bar-B-Q, a local favorite off the beaten tourist path, where the pork ribs were to die for. Tom and I were there in 2009 and I just had to go back! 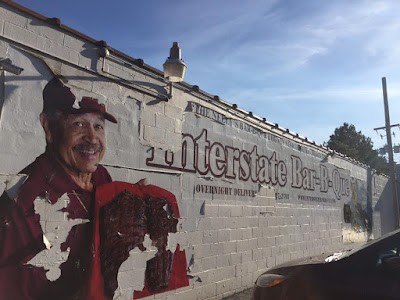 The locals swear by this joint. It's unassuming, friendly, low-key and down-home. 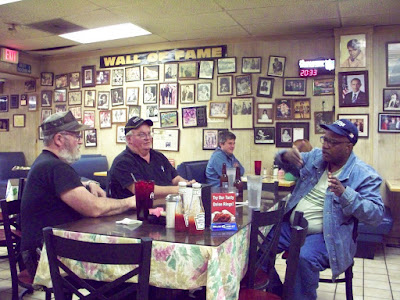 If you're ever in Memphis and want to experience true, authentic Memphis barbecue, this is the place to go! 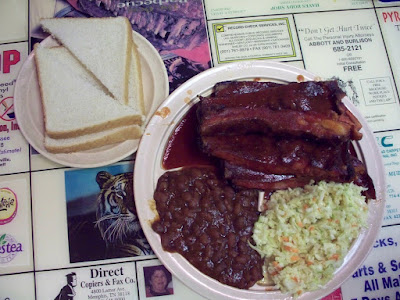 After a day of riverboating, duck-watching, cocktailing and rib-eating, it was time to call it quits. I still get fatigued in the late afternoon, so after Charlou and Joanna dropped me off at my hotel I went straight to bed.

Stay tuned tomorrow to see today's adventures. As I write this, Charlou and Joanna are driving back to Northwest Arkansas, about five hours away, where Charlou and her husband Bill live. Joanna will stay with them through next week and then she'll fly back to San Diego, our hometown. I'm heading east later today.